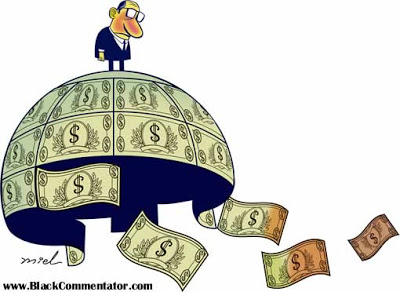 Cartoon from Black Commentator.
Time to reboot?
Fed’s big bucks may be drops in bucket

As is often the case, Bloomberg tells it like it is, although a little interpretation is needed to put things into their proper context. Rarely do we hear it put so plainly that the U.S. government is almost out of realistic options for reviving the U.S. economy:

For $2 trillion, Federal Reserve Chairman Ben S. Bernanke may buy little improvement in growth, employment or inflation over the next two years.

Firms with large-scale models of the U.S. economy such as IHS Global Insight, Moody’s Analytics Inc. and Macroeconomic Advisers LLC project only a moderate impact from additional Fed asset purchases. The firms estimate that the unemployment rate will remain around 9 percent or higher next year whether the Fed buys $500 billion or $2 trillion of U.S. Treasuries in a second round of unconventional stimulus.

“This is not a game changer for the economic outlook,” said Nigel Gault, chief U.S. economist at IHS Global Insight in Lexington, Massachusetts, whose models show that $500 billion of purchases would boost growth 0.1 percentage point in 2011 and leave the unemployment rate at 9 percent or above for the next two years. “There is clearly a risk that people start to perceive monetary policy as impotent.”

The meager impact shows the conundrum U.S. central bankers face. Interest rates near zero have failed to produce the intended cycle of borrowing and spending among consumers and businesses. Unemployment hovering near a 26-year high, partly a symptom of weak demand, keeps downward pressure on prices, and further declines in inflation would raise borrowing costs in real terms, making credit more expensive…

First they tried lowering interest rates, as they have done so often before, but that didn’t work. This was partly because they did it so often in the past — so it lost much effectiveness as a way to discipline risk during the successive Greenspan bubbles.

Then they bailed out the banks and injected a lot of Keynesian stimulus spending — which requires Congressional approval. This had little result except to make it easy to agitate the U.S. middle class, who probably feared all their taxes would go to immigrants on welfare.

A combination of Congressional gridlock plus conservative anti-Obama politics is now preventing much more Roosevelt-like stimulus spending, no matter how great the need. Probably this opposition will continue after the elections, and until grassroots economic pain increases its political impact.

Economists say further asset purchases could underscore the limits of monetary policy, which is hobbled by consumers’ desire to pay down debt and the reluctance of Congress to approve additional fiscal stimulus.

“At the zero boundary on interest rates, the burden shifts to fiscal policy, and fiscal policy is immobile because of the politics,” said [Macroeconomic Advisers co-founder Laurence] Meyer. “So now, the burden has shifted back to monetary policy. You have to hope the economy’s own resilience and underlying strength is going to be enough to have growth a little bit above 3 percent.”

Having few other options left, the Federal Reserve (channeled by Bernanke) is announcing that they may create up to $2 trillion in new easy credit (as they have the legal right to do), and trade lots of cash to the banks in return for their suspect securities, although this would create few jobs. It kind of sounds bad, so the feds may need to relabel this remedy.

“We know the Fed is going to be doing something,” said David Rosenberg, chief economist at Gluskin Sheff and Associates Inc. in Toronto.

“The question is, in a cycle of contracting credit, how far will it work,” he said. “If taking rates to zero didn’t work, and if QE1 didn’t work, then the question, legitimately, is QE2 going to work?”

Quantitative easing refers to large-scale asset purchases as a tool of monetary policy. Bernanke has said the purchases support growth by lowering borrowing costs across a broad spectrum of debt as investors reallocate money they would normally invest in Treasuries into mortgage bonds, corporate notes, and other securities…

“It is a small but meaningful benefit and the recovery can take all the help it can get,” [Moody’s Analytics’ Mark] Zandi said. Because purchases could have such a low medium-term impact, Fed officials may recast the strategy in terms of aiming at a level on an inflation index rather than the rate of change on the index, Zandi said.

Despite the known drawbacks and weak results of such quantitative easing, the U.S. Treasury and federal Reserve officials feel the need to try something other than watching things get worse.

The Fed “really doesn’t have any alternative but to give this thing a whirl,” former Fed Governor Lyle Gramley, now senior economic adviser at Potomac Research Group in Washington. “It has a mandate to create maximum employment and price stability. It has to try.”

This all sounds kind of bad. Let us now leave Bloomberg for a second opinion which explains the same situation. On NPR’s Money Planet, finance reporter Adam Davidson, who, like Paul Krugman, is a skilled popularizer of complex economic ideas, recently reported much the same thing. His perceptive blog explains why a second round of quantitative easing (called QE2 in the Bloomberg piece) — essentially giving easy cash to the banks in return for their paper, is unlikely to revive the economy. The track record of QE is not good; Japan tried it and it didn’t work:

“A big bank — Bank of America, say — has $50 billion in government bonds. They’d sell those bonds if anyone would pay enough for them, but nobody is willing to pay that much. So the bank just holds on to them.

With quantitative easing, the Fed comes along and says, “Hey, Bank of America, we’ll buy those bonds for a little more than anyone else is willing to pay.” Bank of America says, “OK, great, send us the money.”

This is where the Fed gets to use central-bank magic. They pay for that $50 billion purchase in new money. They just invent it. That’s what the Fed — but nobody else — gets to do.

It sounds great. Create new money, get it out there, everyone wins. But — of course there’s a but.

Nobody really knows if this works. It’s still really controversial among economists. It’s only been tried a few times and, as in the case of Japan, hasn’t had the greatest results.

The Fed first used quantitative easing in 2008. It’s now considering a second round, even though a lot of folks are against it.

While the economy is still this bad, the Fed really might only have two options: Do this as a desperation move, or do nothing.”

Thus the biggest private bankers, operating through the Fed, have effective legal control over the whole U.S. economy. Just as Davidson says, the Federal Reserve has the right to create as much money as they please and give it to whom they please. Consequently, the public benefits from our U.S. banking system are ultimately of a trickle-down nature, subject to the fickle motivation of banking profit and Federal Reserve whim, often in alliance with the U.S. Treasury.

The Fed is busy creating money and offering it to the banks in the apparent hope that — even in the absence of regulation or reform — some of it will stay here and won’t head toward more profitable investments that don’t create U.S. jobs. I described this same situation last December, as we can see from the Stiglitz snip in my earlier Rag Blog article:

Stiglitz, 66, also said the Federal Reserve contributed to the financial crisis by failing to supervise banks or stem the housing bubble. He questioned proposals to give the central bank more authority to supervise firms whose failure might threaten the financial system. “Giving more power to an institution which has failed so miserably, with results that have imposed such costs on all of us, cannot be the right solution unless there are deep and fundamental reforms in the institution, of a kind that are beyond those currently being discussed,” he said.

In the absence of the banking reform that Stiglitz advocates, reform that would partly take control of the U.S. economy away from private hands, the bankers have little incentive to create risky, low-profit domestic jobs.

The bankers see little profit to be made from investing in such jobs, knowing that the U.S. consumers are under great financial stress. U.S. bankers won’t invest much in the industrial production of globally traded goods, because U.S. labor costs are still high compared to those in China and the rest of the world.

Without strong outside regulation, the U.S. banks are free to use their $2 trillion (or whatever the Fed pleases to create and give to them) to speculate in the most profitable stuff. Things like gold, vital commodities like food, and in new industries abroad — like in China, where iPhone production remains highly profitable because of cheap labor. GM now makes lots of its money by building its cars in China rather than the U.S.

All things considered, it looks like a good time to reboot the whole U.S. economic system.