Roger Baker : How High Gas Prices Are Putting the Hurt on Average Drivers 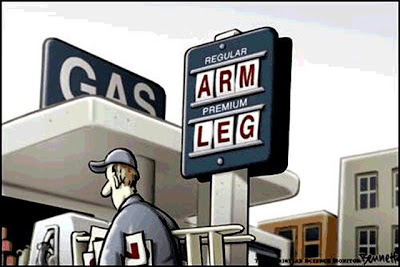 Cartoon from The Smoking Jacket.
How high gas prices are hurting
average drivers (and voters)

[This is the first of a two-part series.]

High gasoline prices are probably hitting the average driver and voter harder than most people think. The numbers indicate that typical adult wage earners, meaning average voters, are already being hit hard by a combination of a depressed economy and stagnant pay, while having little choice but to pay higher gas prices.

The wage trends here show that average U.S. earned wages (with the average being distorted upwards by the high income end) have been almost stagnant since 2007. This means that if the bottom half of wage earners were hurting in 2008, they are probably still hurting about as much now.

Most people who own their homes have seen their homes, as their major investment, decline in value. Also most other savings and investments have not prospered, with interest rates on banked savings remaining at near zero. “Core inflation” is said to be only a few percent, but inflation is being officially underreported with non-discretionary prices, which are a bigger part of low income household budgets, rising faster than discretionary costs. 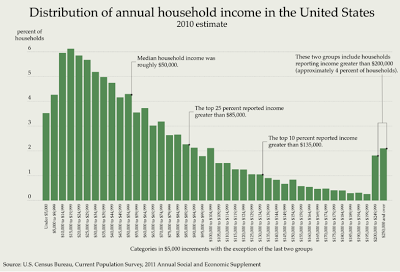 This shows how many must be struggling to drive when the cost of driving is considered. If we assume two adult wage earners in many households, this would mean that each would be earning or receiving through benefits only $10,000 on average. Perhaps this is due to the unemployment of one, or part time or minimum wage jobs, or relying on social security or pensions as their primary income.

If the household consists of a single mother with an income of $20,000 and a child or two, there are the added costs of raising children. Whatever the reason, car ownership is increasingly dependent on income for a large portion of U.S. households.

In 2008, the Brookings Institution provided further evidence that the lowest income third of the population in particular seems to be struggling to drive at all. See the chart showing the highly significant correlation between income and car ownership. 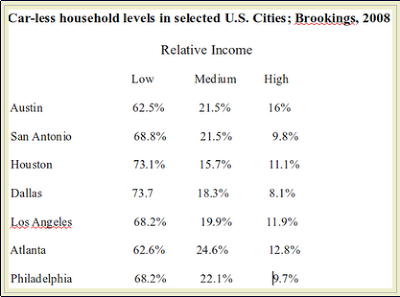 These numbers, although a few years old, indicate the degree that low income households live in an economic twilight zone, an income level where a major lifestyle barrier determines whether or not they can afford to own and maintain a car.

How does income compare with what it costs to drive?

Here we see that the typical cost of owning and driving a family car was nearly $8,800 in April 2011.

The average annual cost to own and operate a sedan in the USA, based on 15,000 miles of driving, rose 1.9 cents per mile to 58.5 cents per mile, or $8,776, says AAA’s 2011 “Your Driving Costs” study. The increased costs to own and operate a vehicle were driven mainly by large increases in fuel prices, depreciation costs and tire prices, says John Nielsen, AAA national director of auto repair, buying and consumer programs.

Below is an expanded five year chart of aggregate U.S. urban transportation costs, a Saint Louis Federal Reserve FRED chart. Transportation costs in U.S. urban areas, where most folks live, have now exceeded mid-2008 costs and are crowding out other living costs at the lower earnings end of the wage spectrum. We see the total cost of getting around in U.S. cities by all means (which means predominantly cars) rose rapidly to end 2011 at a new record high level. 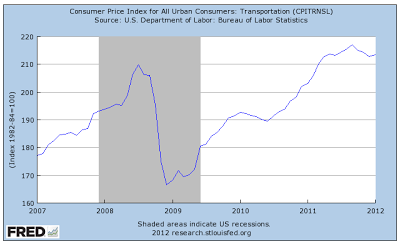 This series is charted monthly, but stops in December 2011. Looking at fuel price increases since then, and judging from the impact of fuel prices in recent years, it appears that the current cost index would probably be nearly 230, assuming the graph were continued to show the effect on driving costs of the big fuel price increases in the first few months of 2012.

In other words, since April 2011 of last year, the cost of owning and driving a car has increased roughly by a ratio of 205 to 230, or about 12%. That means that if the total driving cost was almost $8,800 a year ago, the urban travel cost consisting mostly of cars would now have risen to roughly $10,000 on average.

A recipe for frustration

For the many households with about $20,000 in total income, there is likely at least one adult who would want to own a car and drive, much as adults in the wealthier households do. However, even if a wage earner earns $20,000 a year, the $10,000 cost of car ownership and maintenance would now require about half their income.

There is no way to avoid the conclusion that many wage earners at the lower end are struggling hard to pay for food and rent and still drive a car to work, and that higher driving costs are forcing them to shed cars. This probably accounts for the current political focus on gasoline prices.

Among people in the lower 50% of household income level, many of whom can manage to afford to drive, fuel price increases must necessarily involve difficult choices, with a strong tendency for fuel costs to crowd out and depress other spending. Once discretionary spending — like eating out and entertainment — has been eliminated, life becomes a matter of balancing frustrating choices.

For many, the cost of the fuel needed to commute to work in aging cars (who can afford a new electric car, as opposed to keeping the old one running as long as possible?) has become a symbolic high-profile political issue.

For lower income residents in particular, it is easy to see why fuel price increases have become a source of anger; a red flag for so many average voters. (Part 2 of this series will look at what the public opinion polls are saying, and how and why rising fuel prices are becoming such a hot topic for the upcoming presidential race).

A large part of the new residential housing in recent decades has been suburban in nature, assuming a lifestyle that almost demands the use of the private automobile. Suburban sprawl development on the fringe of U.S. cities has tended to be low density, non-mixed-use development. Such development is intrinsically hard to serve with transit when compared to the denser core city, which generates many more trips per mile of service.

This means that the end of cheap oil is bound to have a major impact on U.S. land use, and its habitation potential. (See “The End of Suburbia.”) Whereas poverty was previously concentrated in the core city while the suburbs were more affluent, the suburbs have now gotten poorer; most poverty is now in the suburbs.

In some areas, there are entire suburban neighborhoods full of abandoned homes. Many of the newer jobs have also moved out toward the suburbs. This means that getting to work increasingly requires commuting between suburbs to get from home to work, a type of travel which transit, by its nature, is ill-suited to handle very effectively.

Transit to the rescue? Yes, but not very fast, since it has been lacking significant new investment in recent decades. U.S. transit ridership peaked in 2008 and has since recovered modestly — but it has still not yet reached this previous peak.

Looking at the graph to the left at this link, it appears that the poor economy largely led to the 2009 ridership decline, while increasing fuel prices are now helping to lead to a modest U.S. transit rider recovery. 2011 transit ridership is now up about 2.3% over 2010. However in some areas harder hit by high gas prices and and a poor economy — like San Diego — transit use is up a lot more.

The trend of mass transit growing more and more “in” with the public can be seen all over the country. The American Public Transportation Association reports that Americans took 10.4 billion public transportation trips in 2011, the second-highest total since 1957. That figure is bettered only by 2008’s total, when gas prices soared to over $4 a gallon.

Transit faces several challenges, including a class-image problem, with so much U.S. suburban development being car-addictive by nature. In urban areas, those who use transit — and who are willing to trade the convenience of driving for the time savings benefit of public transit — are often identified as being among the poor. This often makes transit a hard sell politically.

The other problem is that transit — like roads — is unprofitable and requires a lot of public money up-front, especially for rail. Government money is increasingly in short supply these days. By the time the politics swings in favor of transit, as a result of peak oil and soaring fuel prices, transit might well be unaffordable.

Those left stranded in the suburbs can try to carpool, telecommute, combine or eliminate trips, or drive slower to save on gas. If all else fails, they can move to less gasoline-intensive locations. By last year a distinct home-buyer avoidance of suburbs with long commutes could be seen.

The other transportation option that appears to hold promise for preserving the habits of suburban commuters, struggling on a limited budget to drive, would appear to be the widespread acceptance of smaller personal vehicles like bicycles, electric bikes, motorbikes, and motorcycles, especially for commuting — and despite the risks that come with their use. There is good evidence that public support for downsized travel alternatives is steadily increasing, even electric motorcycles.

However, most suburban highways are not designed to safely accommodate slower or smaller vehicles. For example, TxDOT builds wide shoulders on its high-speed highways, supposedly for the benefit of bikes — despite the fact that the large speed differential makes bikes sharing lanes with cars unsafe when the cars are going more than 30 MPH. The evidence indicates that many drivers try to shift to motorcycles to save on fuel costs with sometimes deadly results.

Our findings suggest that people increasingly rely on motorcycles to reduce their fuel costs in response to rising gasoline prices. We estimate that use of motorcycles and scooters instead of 4-wheeled vehicles results in over 1,500 additional motorcycle fatalities annually for each dollar increase in gas prices. Motorcycle safety should receive more attention as a leading public health issue.

2 Responses to Roger Baker : How High Gas Prices Are Putting the Hurt on Average Drivers