Roger Baker on Austin’s Economy : Big Picture Not So Pretty? 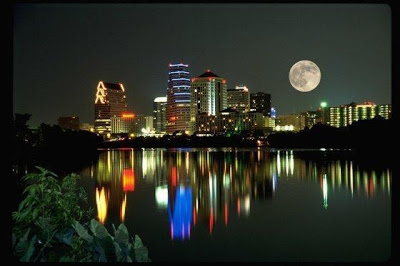 Austin: as pretty as a picture. But what about the economy? Image from Nerd Fighters.
Filling in the big picture:
Wither Austin’s economy?

The Bureau of Labor Statistics (BLS) just released its latest jobs report which shows that almost all the jobs being created nationally were due to temporary census hires. Very few were created by private business, which would indicate a solid economic recovery. With most state budgets seriously stressed, it now seems to be largely federal stimulus money that is preventing contraction of the overall U.S. economy.

How is this big picture situation likely to affect Austin, Texas, with the current 7 percent reported unemployment rate?

Let us begin by cautioning against putting a lot of credibility in this rosy economic picture painted by the Greater Austin Chamber of Commerce.

The goal of the chamber site is largely to try to recruit new low-wage industry to Central Texas by bragging about things like low private sector unionization and the low Texas unemployment insurance payouts. One way the chamber misleads is by looking backwards: it uses old 2007 data from the housing boom era, rather than using the new data from the Bureau of Labor Statistics.

In fact, one major value of the chamber site, for purposes of analysis, is that it retains old jobs data, useful for comparison in the same jobs categories used by the BLS site below (i.e., see the chamber chart labeled “Employment by Industry, Austin MSA” to see the comparable numbers for the jobs categories below for 2004-2008).

We will go on to the more useful and revealing information. Fortunately there are much better sources than the Austin chamber and the local business press.

The best way to drill down is to go to the Texas Workforce Commission website. Their “Tracer” page lets us do a custom search for jobs under the “non-farm employment” category in the Austin Metropolitan Statistical Area (MSA) 2000 area.

This BLS link is really derived from Texas Workforce Commission (TWC) data, but it displays an excellent chart summarizing the employment structures and trends underlying the Austin economy. This allows us to see the growth and shrinkage of jobs in the various Austin area job categories during the last year.

Below are the basic employment numbers reported for April 2010 within the the sprawling Austin/Round Rock/San Marcos MSA, covering the most concentrated area of Austin metropolitan development:

Let us mine this data for economic insights. Overall, we see that the Austin area economic growth is nearly flat, and those seeking work have continued to increase to a currently reported 64,400, which equals 7.0 % unemployment. Such unemployment numbers are notoriously inaccurate; the number of people seeking jobs is uncertain and is almost always higher than what gets reported. Even so, this number seeking jobs clearly overwhelms in scale the total of 763 jobs actually added to the Austin MSA area in the past year.

A better way to understand the jobs situation is to focus on the actual reported employment numbers.

One Important insight that Austin’s highly paid private sector jobs — like manufacturing, information technology, and the high-paying professional jobs — are shrinking. These high-paying private jobs are being replaced by other private — but lower pay — jobs related to tourism and the largely private health care industry (though, in the final analysis, many health care jobs are actually supported through state and federal pensions, Social Security, Medicare, etc.).

The leisure and hospitality job increase of 5,300 jobs is the one bright spot in the Austin area jobs trend picture. It is possible that an increase in mostly tourism-based jobs during the last year is partly due to lower travel costs recovering from the very high energy costs of 2008. Or it could be due to recent hotel expansions started during boom times. This is a good area for further analysis.

A deep budget deficit on the Texas state level

We should know that the biennial Texas state budget is about $180 billion and that it faces what the Sunshine Review website describes as a looming budget deficit:

Texas has weathered the economic downturns better than most states with the Texas State Legislature passing and Gov. Rick Perry signing on June 19, 2009 a 2-year budget (Sept.1, 2009 to Aug. 31, 2011) with a projected $9 billion Rainy Day Fund. The FY 2010-2011 biennium budget of $182.3 billion spends $1.6 billion less in general revenue than the previous biennium…

The state is likely to face severe budget constraints, not just today, but for a long time into tomorrow,” said Dale Craymer, chief economist for the business-backed Texas Taxpayers and Research Association. Stimulus money “allowed us to buy time and to push the problem a little farther out,” said Craymer, who served as budget chief for the late Gov. Ann Richards. “Next session (2011), we’re going to have severe challenges.”Indeed, lawmakers are spending slightly less in state money than they did in the budget they wrote two years ago, but the federal money staved off drastic cuts. “We made a sound budget based on the fact that the economy won’t get worse but it won’t get a lot better in the near future,” he said.

Former House Appropriations Committee chief Talmadge Heflin, R-Houston, said taking $12 billion in stimulus funds “could come back to bite” if lawmakers aren’t willing to cut spending next session. “We could have as much as a $15 billion gap to fill,” said Heflin, now with the conservative Texas Public Policy Foundation. Craymer of the business research group guesses the gap will be $13 billion. While most could be filled by draining the rainy day fund, the politics could be tricky, he said, because two-thirds of both the House and the Senate have to vote to spend it…

This unhappy situation has since gotten worse. The latest shortfall number, according to Texas House appropriations chair Jim Pitts, R-Waxahachie, with concurrence by Lt. Gov. David Dewhurst, is actually about $18 billion, or about 10% of the total Texas budget.

The Austin economy is highly dependent on state jobs

With Austin’s private sector moribund and its wages shrinking, what is the likelihood that new government jobs can be created to fill the gap? It is revealing to analyze the likely trends in Austin government jobs, including local, state, and federal jobs.

What if this looming Texas revenue shortfall caused the various local agencies to lay off 10% of the Austin area workers employed by Texas? How many would that be? These are the basic TWC numbers, non-seasonally adjusted, and for the three main categories of government employees in the Austin MSA, as reported by the TWC for April 1010: Federal jobs = 13,700; Texas state jobs = 74,600; Local government jobs = 84,400.

The thing that stands out from this data is that the Austin MSA area is very highly dependent on state government jobs supported by decades of constant growth of the Texas economy, much as it has been in the past.

If Austin, reflecting the looming 10% state budget shortfall, should lose 10% of its Texas state jobs — or 7,500 jobs — this loss would equal nearly 10 times the total new jobs created in the whole Austin MSA during the last year.

With Austin’s private jobs and its professional job sector shrinking and the state funding also trending toward deep deficit, what is left to secure Austin’s future job growth? Maybe lots of retirees with good pensions, one might hope?

For now, the Austin economy, by default, seems increasingly reliant on direct and indirect federal funds to fill the widening gap left by the shrinking private and state jobs sectors. If we look at Texas as a whole, the Texas Workforce Commission data shows that the total federal jobs in Texas have been nearly flat over the last year, even as state jobs have increased slightly. Given this lack of total federal jobs growth in Texas and a federal deficit running more than 10%, it seems unlikely that new federal level jobs could increase fast enough to compensate for the worsening state level funding gap.

If the various kinds of federal stimulus funds, like the census jobs that appear to be propping up the national and Austin area economy should shrink much, we would expect the Austin economy also to be hard hit.

This might happen because the Federal Reserve is forced to raise interest rates due to decreased foreign lending. A special concern to those who look at the big picture is the long-range local implications regarding federal support of the programs funded through traditional federal funds, such as Medicare and Social Security.

For example, Austin business and political leaders have been actively promoting an economic development vision of jobs growth based on heath care — as a health and health education center — with training hospitals, etc. This future vision may implicitly be based on an assumption that the past inefficiencies of the current “health care industry” will be supported at past levels. The unsustainable entitlement trends suggest that the federal sector of the U.S. economy may be forced to decrease in relative terms its medical support for an aging U.S. population.

In a similar fashion, if we look at the big picture, the apparently solid growth of the Austin “hospitality industry” in the last year may well be threatened by rising fuel prices and a long-term trend toward a decreased affordability of discretionary tourist travel.

5 Responses to Roger Baker on Austin’s Economy : Big Picture Not So Pretty?