Roger Baker : Should the Left Diss the Tea-Baggers? 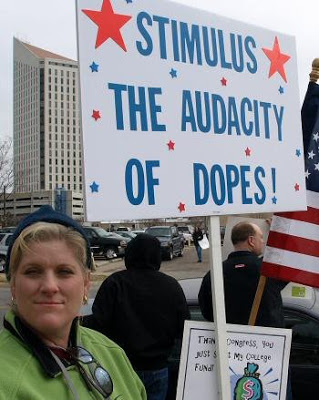 Sign at Tea Party protest in Wichita, Feb. 27, 2009. Photo from Voice for Liberty in Wichita.

The tea baggers versus Obama formulation should be seen as opportunistic political theater that avoids a serious examination of the important issues.

Should we diss the tea-baggers?

Maybe in a thoughtful well-delineated sort of way, but not in a right-versus-left emotional way.

This is an interesting issue because it’s sort of like 1933 with severe economic crisis and a fearful angry populace looking for answers and scapegoats. The kind of situation that breeds extreme political movements and bad solutions.

I think the tea bag thing was a sort of Libertarian-initiated objection to Obama’s spending. The tea bags are a taxing rebellion by those who don’t expect to benefit much. It was opportunistically promoted by Fox news and right wing Republicans.

The left wants to interpret tea baggers as an early stage of Fascism, which it could indeed become. But, IMO, that is a simplistic interpretation that encourages needless class division for the following reason.

The Obama administration is so far siding with the banks; using taxpayer money to bail them out while the banks maintain financial control. Heads they win tails we lose. A situation so ovbiously unfair that EVERYONE should be holding tea bag-like demos opposing the vast majority of out tax obligation money so far going to prop up a sick and dysfunctional banker-ocracy.

The tea baggers are saying that the government is largely squandering our money as usual on future tax obligations where we take the hit without many results. Which seems legitimate to me.

Now set up a parallel government financing system to do the things we really need to do like universal health care, local food production, restructuring society away from carbon fuel addiction, etc.

The tea baggers versus Obama formulation should be seen as opportunistic political theater that avoids a serious examination of the important issues.

A lot of this strong political energy should be harnessed into a broad political reform movement directed against the central issue of big banker-led corporate domination that leads to most of our other problems.

FDR sided with the people and against the banks. So why can’t Obama do that too?

This entry was posted in Rag Bloggers and tagged Obama Administration, Populism, Progressives, Tax Protests, The Left. Bookmark the permalink.

7 Responses to Roger Baker : Should the Left Diss the Tea-Baggers?