Roger Baker : The Economic Side Effects of Peak Oil 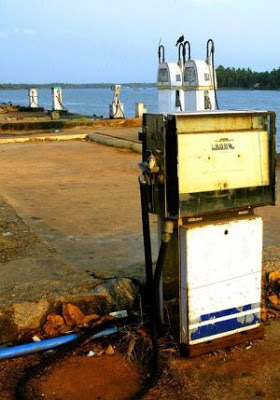 Anyone broadly devoted to the study of resource economics and peak oil sooner or later has to break away from the comfortable and reasonably well known foundations of geologic science, and face up to the much messier and less predictable economic side effects implied by oil supply constraints.

The growing peak oil problem is now deeply intertwined with the growing sovereign (national government) debt problem in such a way that treating either problem tends to make the other problem worse.

Economics is no more predictable than politics and mass psychology. There have indeed been long periods in U.S. history when economic conditions have been sufficiently stable and uneventful that capital plus advancing technology have generated many profitable cycles of investment, based on predictable consumption behavior. During such times, economic rules based on mass self-interest behavior can even allow economics to make a claim of being a science.

However, in unsettled investment times like we see now, the unruly psychology of fear, or self-interest based on geopolitical competition, can easily overturn the normal economic rules, which assume a predictable investment environment based on predictable public marketplace demands.

Three gifted analysts of the political economy, Goldman, Williams, and Wallerstein, recently seem to be in agreement on some important basics. Notably that the prospect for many economically stressed countries, especially the USA, to try to create enough fiat money to stimulate demand to revive their domestic economies is not likely to work out very well or for very long. Once you start down this always-seductive path, it keeps getting harder to turn back.

As a matter of past experience, (see Rogoff and Reinhart’s This Time is Different and Jens O. Parson’s Dying of Money) the initial stages of economic stimulation through the injection of money into the economy are broadly seen as welcome and beneficial. The big problem comes later, when the psychology of spending starts to turn around.

At some point, people tend to discover that there is really more money around than there are certain types of real goods in the market to buy, typically food and energy (which has a lot to do with why the U.S. dropped these from the official accounting of U.S. inflation, and which Williams now estimates at over 5%).

When prices start to rise noticeably, average people start to hedge further price increases by hoarding physical goods — much as they had previously hoarded their money before buying power started to noticeably shrink. As the “velocity of circulation” of the previously sluggish money increases, it comes off the sidelines and its apparent abundance increases, even if no more money is printed. This makes the situation worse. This is a classic self-reinforcing economic behavior cycle that leads easily to hyper-inflation.

As David Goldman points out, and here nicely documents with official bank data, the giant U.S. investment banks and the U.S. government are locked into a codependency that forces them to cooperatively inflate the money supply, like running faster and faster, to delay a general economic collapse.

Now that the state and the banks have merged in a corporatist alliance, all market news is political news. The market got clobbered today on news that New York State would investigate banks for rigging credit ratings on mortgage-backed securities by providing bad information to the ratings agencies.

It wasn’t simply a matter of the banks hiring ratings agency experts and gaming the models for their own benefit; the ratings agencies themselves were making most of their money from the CDO market, and volunteered their time and advice to help the banks issue more.

These issues come up because the banks and governments are partners in the attempt to reflate the world economy through deficits comprising a double-digit proportion of GDP in most of the major economies. The banks finance the governments, with money that they borrow from the governments. That’s why many banks showed a profit during every single trading day of the first quarter: with a steep yield curve and nearly zero-cost funding, you have to go out of your way to lose money…

Like Goldman, Williams points toward a general governmental inability to control spending. Deficit spending will, despite a depressed economy, at some point lead to another rise in oil prices through competitive bidding for a limited supply. Williams sees oil price as a major factor leading the way to renewed cost-push inflation. When the price of oil rises, the price of nearly everything else is soon to follow.

…You can also have inflation, which is driven by factors other than strong economic activity. That’s what we’ve been seeing in the last couple of years. It’s been largely dominated by swings in oil prices. That hasn’t been due really to oil demand, as much as it has been due to the value of the U.S. dollar. Oil is denominated in U.S. dollars. Big swings in the U.S. dollar get reflected in oil pricing. If the dollar weakens, oil rises. That’s what you saw if you go back to the 1973-1975 recession, for example. That was an inflationary recession.

Indeed, the counterpart to what you were suggesting earlier about the strong demand and higher inflation is that usually in a recession you see low inflation. The ’73 to ’75 experience, however, was an inflationary recession because of the problem with oil prices.

That’s what we were seeing early in this cycle, where a weakening dollar rallied oil prices, and then the dollar reversed sharply and oil prices collapsed. We have passed through a brief period of shallow year-to-year deflation in the consumer price index, but, as oil prices bottomed out and headed higher since the end of 2009, we’re now seeing higher inflation, again…”

The U.S. government has no way to deal with its imported oil bill, which is nowadays mostly determined by foreign supply and demand. Uncontrollable commodity price inflation combined with the economic stagnation implies severe stagflation, described by Williams as a hyper-inflationary depression. One central feature of Williams’ reasoning is that, with real inflation now above five percent, the M3 (broad definition) money supply in terms of its buying power is actually shrinking.

This signals recession, even as the government increases its role, trying to inject enough new money to prevent a shrinkage of total real GNP. Average consumers are meanwhile so stressed, and the markets are so distorted by the process, that the banks are now avoiding real world productive investments in favor of the purely paper profits being generated with help from government policy. The good news is that Williams thinks the U.S. will probably manage to survive, but under distinctly different circumstances.

…People will find to their happy surprise that they’ll be able to survive. Most businesses are pretty creative. The thing is, the U.S. economic activity accounts for roughly half that of the globe. There’s no way that the U.S. economy can turn down severely without there being an equivalent, at least a parallel downturn outside the U.S. with its major trading partners.

When I talk about a great depression in the United States, it is coincident with a hyper-inflation. We’re already in the deepest and longest economic contraction seen since the Great Depression. If you look at the timing as set by the National Bureau of Economic Research, which is the arbiter of U.S. recessions, as to whether or not we have one, they’ve refused to call an end to this one, so far. But assuming you called an end to it back in the middle of 2009, it would still be the longest recession seen since the first down-leg of the Great Depression.

In terms of depth, year-to-year decline in the gross domestic product, or GDP, as reported in the third quarter of 2009, was the steepest annual decline ever reported in that series, which goes back to the late ’40s on a quarterly basis. Other than for the shutdown of war production at the end of World War II, which usually is not counted as a normal business cycle, the full annual decline in 2009 GDP was the deepest since the Great Depression.

There’s strong evidence that we’re going to see an intensified downturn ahead, but it won’t become a great depression until a hyper-inflation kicks in. That is because hyper-inflation will be very disruptive to the normal flow of commerce and will take you to really low levels of activity that we haven’t seen probably in the history of the Republic…

Finally, Wallerstein views the big picture of investment fear, much like a global psychologist might. He describes the global nature of the deteriorating market situation and the expanding problem of unsecured sovereign debt. Investors require stability for rational long-range planning.Thus Wallerstein, like Williams, sees a permanent slump in the global economy ahead.

…The Greek government’s problem is quite simple. Its tax revenue is too small and its expenditure level too high for its current and prospective future income. So it must either raise taxes (if it could collect them) or cut expenditures or both — and drastically. This is however also the problem of Germany, France, Great Britain, the United States, and the list goes on. Nor are the few countries that seem to have their fiscal heads above water at the moment (such as Brazil or China) exempt from this contagion. The Greeks are taking to the streets to protest. But this will spread. And, as it spreads, the world market will become ever more volatile, and the fears will expand, not contract.

The major policy response everywhere has been to buy time with paper money that is borrowed or printed. The hope is that, somehow, during the borrowed time, renewed economic growth will occur and restore confidence, ending the real and latent panics. Politicians grasp every little sign of such growth and over interpret it. A good example is applauding recent job creation in the United States, when that job creation was less than the size of the population growth in the same period.

The fear is not irrational. It is the consequence of the structural crisis of the world-system. It cannot be solved by the band-aids that governments are using to treat the serious ailments we confront today. When fluctuations get too great and too rapid, no one can rationally plan. So people no longer act as reasonably rational actors in a relatively normal world-economy. And it is this degree of heightened fear that is the fundamental reality of the present era.

6 Responses to Roger Baker : The Economic Side Effects of Peak Oil