Rogues and Centrists : How Media Frame the World 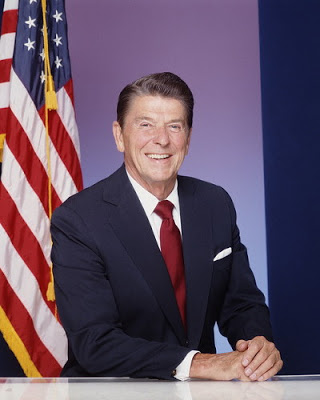 The symbolic uses of politics:
The Gipper and the Rogue

Moderate Republicans — yes, they are not extinct, though most are in hiding — scoff at Sarah Palin and wish she would go away.

…Reagan piously gave lip service to the right-wing social agenda while doing nothing to further it by legislation.

…The ‘Gipper’ talked tough about the Russians — while doing more that any other president to foster détente.

…But it’s no coincidence the Eisenhower ‘50s and Reagan ‘80s were periods of unusual peace and prosperity.

Hitherto men have constantly made up for themselves false conceptions about themselves, about what they are and what they ought to be. They have arranged their relationships according to their ideas of God, of normal man, etc.

A long time ago the eminent political scientist Murray Edelman wrote a book entitled The Symbolic Uses of Politics. In it he postulated that most people experience the political world not through concrete reality but through emotional symbols. For example, the classic way in which people relate to their political institutions is through the flag of their nation.

Americans viewing the flag see images of men in combat fighting for freedom or men and women standing in line waiting to vote for their preferred political candidates. A colorful cloth with stars and stripes gets transformed in our consciousness into a rich, glamorized history even when the emotive images are in direct contradiction with people’s lives.

In addition, Edelman suggests the ways in which the emotional symbols get embedded and reinforced in the consciousness of peoples by borrowing from anthropological writings on myth and ritual. Myths are networks of emotional symbols that collectively tell a story that explains “reality.” Rituals reinforce in behavior the mythology of public life. We need only reflect on the pledge to the flag that opens elementary and secondary school class sessions in rich and poor communities alike or regular meetings of AFL-CIO labor councils.

Edelman pointed out that emotional symbols (he called them “condensational”) provide the primary way people connect with the world beyond immediate experience. The extraordinary complexity of the modern world is reduced to a series of powerful symbols such as the threats of “international communism” or “terrorism.”

Media analyst Todd Gitlin, wrote about “media frames;” that is the ways in which media construct the symbols and myths that shape information about the world. Print media shapes what we read, who are regarded as authoritative spokespersons, and what visual images shape our thinking about countries, issues such as war and peace, trade, investment, and the global climate. Television emphasizes visual images rather than words. Whatever the media form, points of view are embedded in the words and images communicated.

Writers such as Noam Chomsky, Michael Parenti, and Robert McChesney accept implicitly Edelman’s counsel that people experience the world indirectly and usually in emotional form. They also assume, as does Gitlin, that what we read, see, and hear about the world is framed for us. They go further to suggest that what Marx called the “false conceptions about ourselves” in symbols, myths, rituals, and frames are usually the product of ruling class interests.

The Newsweek article cited above was selected not because it was unique but rather because it was representative of ongoing and dominant media discourse. Sarah Palin, while popular with an undetermined but substantial segment of the U.S. population, is presented as an extremist. The article hastens to add that a similar collection of “Democrats can be just as rigidly partisan on the left.” The article suggests that these extremes represent big problems for the political parties in which they operate and most importantly this “polarization” is a threat to the well being of the United States itself.

The article then refers to the “two greatest postwar presidents,” Dwight Eisenhower and Ronald Reagan. They were great in part because they presided over two periods, the ’50s and the ’80s, “of unusual peace and prosperity.” Reagan was the president who did the most to stimulate détente with the former Soviet Union.

In addition to this curious revisionism about “peace and prosperity,” the author claimed that while these two presidents were products of conservatism in their respective Republican parties, they ruled from the center.

To generalize from this extraordinary historical rendition, therefore, contemporary politicians must learn that “populism” from the left or right must be avoided if American society is to survive and thrive.

Further, the article says that the Eisenhower and Reagan years symbolize peace. The collapse of the former Soviet Union occurred because of the policies of the latter. And, despite an enormous array of data and human experiences to the contrary, the 50s and 80s were years of prosperity as well as peace. One can conclude from the description that history is myth, symbol, and ritual, and it is packaged and provided to us in media form as frames.

Perhaps the most potent assumption embedded in this mystification is the proposition that only centrist politics can work.

What role for the Rogues?

It is clear that the centrist agenda could not be defended on its own terms. It is an agenda that supports militarism, financial speculation, deindustrialization, and globalization. The byproducts of these processes are experienced directly by working people throughout the country as joblessness, declining real wages, inadequate access to health care, education, and transportation, and forms of pollution that can be seen from many people’s bedroom windows.

But if Americans can see “extremism” from the “left and right,” often shown on the screen as screaming protesters, then the centrist logic becomes more compelling even though people know that centrism means a weak public option in health care and Wall Streeters regulating themselves.

And which political extremist today can better promote the symbols, myths and centrist media frame than Sarah Palin. So while journalists and their bosses have nothing but scorn for her, she is trumpeted on every news and talk show on television.

The analysis above is not too surprising but what remains more difficult is figuring out a progressive agenda for recapturing the production of symbols and myths and establishing a space to provide more effectively alternative media frames. While alternative media and advocacy groups exist, the need to develop a national and global progressive media agenda still is required.

1 Response to Rogues and Centrists : How Media Frame the World