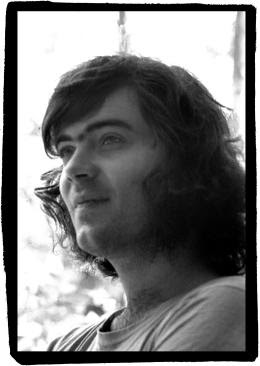 Erickson… is enjoying a fruitful second act that is creatively satisfying rather than a sentimental journey.

Among significant musicians who have endured monumental breakdowns and/or mental illness, few are more sweet and charming in conversation than Roky Erickson. The Austin-based psychedelic rock legend has had as bumpy a ride as any. He’s been drugged (voluntarily), arrested, incarcerated, institutionalized, shocked, drugged (involuntarily) and abandoned over a duration of time (more than two decades) that should’ve left him dead. But on the other end of a phone these days he’s unfailingly courteous.

Talking to some of rock’s eccentrics and near casualties is usually an exercise in futility. Brian Wilson was friendly enough the first and only time I spoke to him, though his shouty voice and naturally clipped answers gave a gruff impression beyond his control. “Thank you,” he shouted before hanging up. “That was a good interview.” (It wasn’t.) Waller native Daniel Johnston was once a chatterbox during an interview; another time he stared at a kitchen table and smoked cigarettes shaking like an old washing machine.

Interviewing such artists can sometimes feel like a self-serving pursuit. The purpose is the same as talking to non-eccentrics: an attempt to glean some sort of interesting information about their art from which to spin a minor profile. With Erickson, for instance, I learned last week that Little Willie John was a influence on his landmark 13th Floor Elevators song You’re Gonna Miss Me. (In a previous chat, James Brown had been mentioned.)

“I just heard one song of his on the radio,” Erickson said. “‘Better leave my kittie alone.’ We had this one real, tiny radio, and I heard Little Willie John sing that. Then I think I heard James Brown’s Night Train. I listened to mostly rock ’n’ roll … though I liked the blues a lot.”

Certain this personal revelation was hardly a national one, I opted not to Google Erickson and Little Willie. But as one prone to obsessing about music I thought it was plenty logical.

Erickson’s life and times following Miss Me were equally foggy, though they’ve been well documented since. The Elevators were short-lived. He spent years in the Rusk State Hospital to avoid jail time for marijuana possession, and came out damaged. He recorded sporadically through the ’70s, ’80s and ’90s, some of it listenable, much of it not. Broke and on the skids, he was rescued in the ’90s by a younger brother, who fixed his teeth and his finances and his living situation, and facilitated a remarkable comeback. These days Erickson is giving full performances (last year’s Austin City Limits Music Festival appearance was joyous and rocking). He’s also recorded with Austin’s Okkervil River, though there are no release details yet.

Erickson’s recall is sometimes keen, other times not so much. Many of his answers begin with a “let me see …” or “let me think …” Some details from 1966 are clear as a bell, others from years later are not. The Elevators were signed to the Houston-based International Artists label, which purchased Miss Me from the Contact label. He recalls the touchstone names in the region (Huey Meaux, Gold Star studio), but stops short of elaboration. Erickson also doesn’t recall the last time he played Houston, though his manager informs me that it was Aug. 11, 1984, at the Consolidated Arts Warehouse. So nearly a quarter century will have passed when he takes the stage at the Continental Club on Wednesday.

If Erickson’s ACL appearance is any indication, he’ll run through Miss Me along with other favorites like Creature With the Atom Brain and Two-Headed Dog.

Much psychedelic rock hasn’t aged very well over the years. It’s shackled to its era and infused with an earnest pursuit of hippie idealism less widely lovable than, say, jive swing, another bygone genre that fused an antiquated style to its substance.

But Miss Me has proven monumentally resilient, an urgently iconic nugget from 1966 that doesn’t attempt to lure you with slurry guitars and chanting about kaleidoscopic kittens. The soul and blues that Erickson cites infused the song with an urgency not found in the psych rock rooted in the folky jug-band tradition. That rawness gave Miss Me legs beyond some other music of its era.

Its opening guitar riff is a strangler, a war cry for 40-plus years of garage rock. And even something as blatantly hippie-esque as playing a jug is defiantly manipulated as to suggest some sort of wild-eyed mutation of something innocent. In the pointless music journalistic pursuit of the punk rock genesis (Iggy! Velvet Underground! New York Dolls! Elvis! Hank Williams!), the Elevators warrant mention if for nothing other than Erickson’s banshee singing, the result, at least in part, of his mother’s affinity for opera.

Musician Shandon Sahm, son of late Texas music legend Doug (a friend, admirer and collaborator with Erickson), says the production reminded him of Sahm’s landmark She’s About a Mover. “The jug is cool, the screaming rocks,” he says. “It’s hard to pin down exactly what makes it awesome, but as Doug used to say about Mover can apply to Miss Me, it just flat out had a groove to it.”

Erickson’s description of writing the song is somewhat cryptic.

“I was just at my house, and I thought I might write a song,” he says. “Then I found myself at this very strange place, some kind of a poetry place or something. All it had was one room and bar. And that was it.”

Erickson says he spends his days “reading a lot,” watching beloved horror movies that seem to inspire his music (see song titles in previous paragraph), and plinking on a pump organ in his home (“It’s missing a key”) and a new Yamaha keyboard, which has pre-programmed songs that he tweaks, other times he works up original compositions, which he figures number in the hundreds.

In the late-’90s Erickson was well-represented in record store bins, though the rash of new releases all featured old material that had been dredged up. But with the tantalizing tease of new music (his first in more than a decade) and his urgently loud performances, Erickson, like Wilson and Johnston, is enjoying a fruitful second act that is creatively satisfying rather than a sentimental journey.

1 Response to Roky Erickson to Houston : Return of ‘Two-Headed Dog’