Plainspoken but eloquent, David Anselme’s ‘On Leave,’ is a novel about war; about the soldiers who fight them and the civilians who send them. 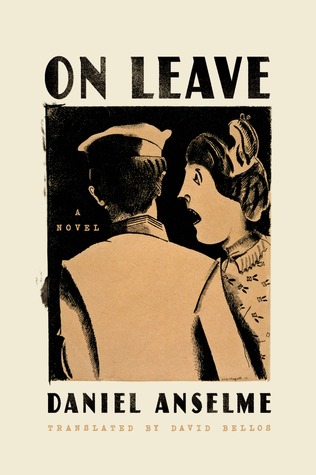 For those who were in the military and even those whose friends or family members were, the idea of going on leave brings forth thoughts of drunken revelry, family, friends, and an almost certain regret when the leave is over.

For most soldiers, sailors and the like, the regret is tied to the fact they must go back to their barracks, ship or whatever. During times of war, that regret is usually greater, given that the place the military members must return to is often in the middle of a war.

Although I was never in the military (and never wanted to be — one can imagine my joy when not only was my draft number very high, but the U.S. military draft was ended in 1973), I grew up on military bases and was more familiar with the culture than most of my peers. The escapades I was involved in with friends on leave and the stories I heard about their Rest & Recreation (R&R) adventures in Southeast Asia could color many a book and, in some extreme cases, might rival the debauchery of a Piero Pasolini take on a classic tale.

Most times, however, the time spent on leave by these young men was consumed with drinking, smoking dope, seeing old girlfriends and parents, and boredom. Once the obligatory stay at the parents’ house was completed, the fun began. Usually flush with money they could not spend while on base, my friends were more than happy to spend it on whoever accompanied them to the seedier side of town.

It’s not that they were necessarily having a good time as much as they were escaping the reality of their bad time in uniform. During the U.S. war in Vietnam, drinking and drugging were the standard path to that escape. Judging from my interactions with young men and women returning from Iraq and Afghanistan, alcohol overuse continues to be a popular medication.

According to U.S. popular myth, military men returning from Vietnam were spat upon and otherwise disrespected, especially by antiwar protesters. As one of the latter who worked organizing on military bases, I can guarantee that this is a lie. It may have happened here and there, but spitting on soldiers was not a tactic of the antiwar movement. Nor were they greeted with parades.

GIs returning from Vietnam were usually met with indifference and averted glances.

Instead, GIs returning from Vietnam were usually met with indifference and averted glances. This reflected the U.S. population’s uncertainty and dismay with the way the war was going and Washington’s almost certain defeat. It was also related to the antiwar movement’s excellent job in exposing the war’s complete and total barbarity.

France had a similar situation after World War II. Despite their tragic experience in that war, the nation failed to learn a primary lesson — empire can only be maintained through violence. So, the Republic sent troops to reinforce its domination of Vietnam and Algeria. The Vietnam experience ended in disaster for the French in 1954 in Dienbienphu. It would continue in Algeria until 1962.

As that war grew bloodier it also grew more unpopular at home. Young French men were sent off to battle with little or no enthusiasm while pro-war politicians criminalized dissent, the Communists vacillated, and the rest of the left organized together with others in an effort to get French troops out of Algeria.

Writer Daniel Anselme was a member of the Communist party when the war began. He became disillusioned with the party’s vacillation — at first supporting the French adventure and only much later opposing it — and left the party. A journalist and poet, his novel La Permission (On Leave) was published in 1957. It attracted very little attention at the time, most likely because of its antiwar position and its rebuke of most of the French establishment’s insistence on continuing the war.

The story of three French soldiers on leave from Algeria, Anselme’s tale introduces the reader to Luchaume, a schoolteacher conscripted at the beginning of his young marriage, Valette, a youth from a French town where the Communists are the elected officials, and Lasteyrie, a young man from the Parisian streets.

The schoolteacher’s marriage is in shambles and when he arrives at his apartment his wife is nowhere to be found. He spends a few hours there and then takes up residence in a transient hotel in another part of Paris. His next few days are spent in a mostly inebriated state.

Valette heads to his family home, where he argues with his sister’s Communist beau about the war and acts as if he enjoys his family’s company. Lasteyrie checks in on two old street friends, and parties. The three of them all end up in Paris for the last 24 hours of their leave drinking, arguing, and joking while they spend time with a German woman named Lena. Then, they board a train that will begin their journey back to the front, such as it is.

The question of the war hangs over the entire novel.

The question of the war hangs over the entire novel. Its barbarity, racism, and total lack of any moral righteousness are insinuated on every page. So is the apathetic reaction of the French population to the atrocity being waged in its name.

There are a couple moments, however, when that apathy is breached. One such moment occurs when Luchaume is at Vallette’s family home eating dinner. After avoiding a discussion of the war for most of the evening, Valette finally lets go, shouting and asking “Why did you allow us to leave? Why did you allow the troop trains to leave? Why did you abandon us when we were on the trains? Why? Why? We did not want to go! We did everything we could not to go! We barricaded ourselves in our barracks…! Why?”

The same questions were asked in the U.S. during its debacle in Vietnam and even, on occasion, as it sent men and women to their fates in Iraq.

This is a novel about war; about the soldiers who fight them and the civilians who send them either willingly or because they can pretend it has nothing to do with their lives. Plainspoken but also eloquent, it is a gentle plea to end wars of empire not only because they destroy the lives of those in the lands where the guns are blazing and the bombs exploding, but also because such wars destroy the lives of those the empires enlist to do their bloody work.