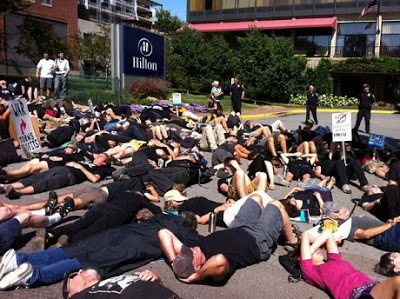 Contradictions between the powerful and everyone else are heightened in places like North Carolina, especially when contrasted to liberal enclaves like Vermont… However, the difference between the right wing state and the liberal one is often much smaller than one might think.

BURLINGTON, Vermont — Leaving Asheville, North Carolina, the place I called home from summer 2005 through summer 2012, always provides me with a mixture of regret and relief. I love the beer, music, scenery and my friends there, but the fact that it is in the U.S. South — with its generally reactionary politics — always leaves a bitter taste.

Asheville itself is a city whose relationship to its home state is much like the relationship Austin has to Texas. It is a liberal to progressive enclave in a wasteland of Bible Belt intolerance and anti-worker policies designed to keep the workforce in a state of perpetual desperation. Low wages, no unions and bosses who can fire folks almost at will seem to be the order of the day in states like North Carolina.

The high unemployment rates in the state keep the marginally employed and those just a paycheck away from that status in a situation not much different from the slavery once commonplace there.

A friend of mine plays in a number of symphony orchestras in the region. Every summer she performs in a few pops concerts that serve as fundraisers for these ensembles. The most recent one was in a town about 50 miles east of Asheville. She described the scene to me over beer and pizza.

I pulled into the parking lot after getting lost on the back roads. The lot was filled with BMWs, Mercedes SUVs, Lexuses, and Escalades. Standing around in small groups underneath tents covered in corporate logos and set up to keep the sun away were groups of mostly older people.

The women wore light clothing that they probably paid too much for. The men, almost to a T, were dressed in white polo shirts, deck shoes, and pink Bermuda shorts. Many of the automobiles sported Romney bumper stickers and, as I walked toward the performers’ entrance to the stage area, I couldn’t help noticing the number of audience members sporting Romney campaign buttons.

The show was your standard fare: Sousa and other patriotic nonsense, show tunes and a couple edited versions of popular classical tunes. The patriotic tunes received the most applause, of course. When I got back to my car there was a Romney campaign leaflet stuck under the windshield wiper.

Contradictions between the powerful and everyone else are heightened in places like North Carolina, especially when contrasted to liberal enclaves like Vermont (where I currently reside), and the hope of progressive change seems minimal. However, the difference between the right wing state and the liberal one is often much smaller than one might think.

After I bought my airline tickets to Asheville I found out that the Northeast Governors Association (and Eastern Canadian PMs) would be holding their conference in downtown Burlington the same weekend. Like its larger parent, the U.S. Governor’s Association Conference, the northeastern conference is a weekend of political backslapping, conspiring and feasting with lots of corporate sponsorship.

The context of this year’s conference is the ongoing campaign by the energy corporation HydroQuebec to dam up Quebec’s rivers, destroy the pristine wilderness they flow through, and displace the people and wildlife living there. Another part of the context is the desire of the oil industry to ship oil from the tar sand fields in Canada through the New England states.

To top off their arrogance, Quebec Premier Charest, whose refusal to back off of tuition hikes and other changes to Quebec’s higher education system have sparked a strike and massive protest, was feted.
So, protests were planned. 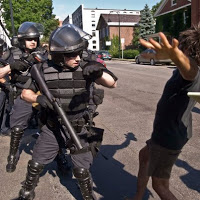 Since I could not afford to change my travel dates I wished my comrades well. Imagine my surprise upon returning to Burlington and finding out that Burlington police had attacked protesters with rubber and other “non-lethal” weapons for attempting to block roads around the conference site.

Of course, in the wake of the police attack, politicians and police administrators were quick to blame the protesters for their “aggressive” tactics. Response from some segments of the community was swift. University of Vermont literature professor Nancy Welch wrote in a Facebook post regarding the police attack:

What Burlington Police Chief Michael Schirling leaves out of his defense of the police assault on protestors outside the Northeast Governors Conference is that the “confrontation” and “conflict” the protestors engaged in was nonviolent.

Just as the men and women who sat in at Greensboro lunch counters and marched on Montgomery in the Civil Rights era had a conflict with Jim Crow and sought to confront it, so do the people who marched Sunday have a conflict with heads of state who push such environmentally and socially devastating projects as Tar Sands and the F-35 bombers while defunding family planning clinics, public services, and state universities.

The protestors’ confrontation took the classic Civil Rights-era forms: lying down in front of the hotel the governors were huddled up in; standing in front of the bus that was to whisk the governors away to dinner. It is sobering that police chose to respond in Bull Connor fashion by unleashing violence. Even more sobering is that our Democratic mayor and governor are championing them.

The fallout continues. The newly elected Democratic mayor of Burlington is now calling for a conversation between the city, the police and citizens. At the same time, some kind of investigation is supposedly being arranged. The likelihood is that little will change and the police will be able to do what they please when situations like that which occurred the weekend of July 29th happen again.

Earlier in this piece I wrote that political environments like that found in North Carolina tend to heighten the contradictions between the rulers and the ruled. So do actions like those undertaken by Burlington police outside the Northeast Governor’s Conference. One can only anticipate with trepidation what contradictions law enforcement in Charlotte, N.C. and Tampa, Florida will heighten when the U.S. Republicans and Democrats hold their conventions in the coming days.