Julie Wark has written a manifesto for justice and it is clear for now that we as a species have failed. 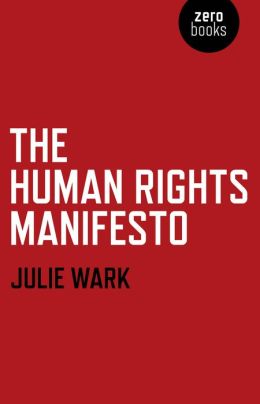 Julie Wark has written a manifesto for justice. Simply titled The Human Rights Manifesto, her book examines the UN Declaration of Human Rights and compares it to the current situation. In doing so, it is clear that we as a species have failed.

While there is certainly plenty of blame to go around, from those activists who have resigned from the battle to those who have convinced themselves that the current political and economic systems are capable of remedying the daily violations of human rights, the bulk of the blame remains with the greatest violations of those rights. That means governments, their militaries and police officials, and their courts.

The ultimate violator however, in every measurement Ms. Wark relates, is the current manifestation of the capitalist economy: neoliberalism.

This book destroys the myth that neoliberal capitalism is a positive force for humankind. It does so by merely stating the facts. Example after example of the cruelties and deprivations unleashed in the name of corporate and financial freedom leap from these pages.

Thousands of children starving every day; forests, rivers and mountains ravaged, raped and destroyed by the machines ploughing under our planet’s future; wars undertaken and resistance destroyed to ensure the continued expansion until death of the capitalist system emanating from the world’s financial capitals. The perversion of local and national food economies via corporate manipulation of production through the commodification of food and artificial GMOs to the withholding of fertilizers and food via sanctions, humanity’s fundamental right to not starve is denied.

Despite the ravages described in The Human Rights Manifesto, the author holds out an optimistic hope flickering in this litany of despair.

Despite the ravages described in The Human Rights Manifesto, the author holds out an optimistic hope flickering in this litany of despair. That flicker emanates from that long-forgotten and ignored declaration.

It’s been clear to many for a while that humanitarian interventions are usually something else entirely. How else could one explain the increase in death that often occurs after the supposedly humanitarian troops arrive with their automatic weapons, their fighter planes and attack helicopters?

How else can one explain the fact that when the original military phase of such interventions are over, the foreign troops remain, imposing the will of their political and corporate commanders back home? How else does one explain that in so many of these interventions, the majority of the civilians residing in said countries still find their lives at risk?

The nature of these interventions and their non-humanitarian results have led many to scoff whenever the words “human rights” appear as a motivation. This skepticism feeds into the invaders’ dynamic quite helpfully, leaving their military power plays unchallenged in any meaningful way.

Ms. Wark’s book reclaims human rights for those whom they were originally intended. That is, for all humanity, especially those whose existence is considered unnecessary by the Goldman Sachs of the world.

Instead of defining these rights in a manner that considers the right to buy and sell to be more important than the right to eat, Wark’s text is inspired by an understanding that human rights can only be human rights when they are applied to all of humanity, not just to those of a certain nation, political or religious philosophy, and certainly not only to those with property and wealth.

Essentially anarchist in its analysis, The Human Rights Manifesto gives no government or economic system a free pass. Yet it is primarily a searing indictment of neoliberal capitalism.

Don Winslow is the author of several works of crime fiction. His novels are about people that travel in the smuggling of contraband, drugs and human. The laws of society rarely apply in Winslow’s world. Instead, it is usually the individual who is most brutal and amoral that succeeds. When the force of justice does appear, usually in the form of a renegade cop or private investigator, that justice is without mercy.

I mention Winslow because Wark quotes his novels in her book. The quotes she chooses are not laudatory. Instead, they compare the morality of those who run and profit from the neoliberal capitalist economy to those that operate in the murderous economy Mr. Winslow writes of so graphically in his novels. The difference, the use of these quotes seems to claim, is just a matter of scale.

Perhaps the most interesting discussion in this book is the one presented by Wark concerning language and its (mis)use and manipulation. She lambastes the misuse of words like justice and the phrase human rights. Not only has their meaning been manipulated, it has been rendered meaningless.

If the words describing a phenomenon no longer have any absolute meaning, then the phenomena become whatever those in power decide. In this world, justice becomes revenge and war becomes humanitarian intervention.

When the original UN Declaration was signed in 1948, it combined economic and political rights.

When the original UN Declaration was signed in 1948, it combined economic and political rights. After the major capitalist nations balked at the two elements being linked, the declaration was split and those nations objecting did not sign the part dealing with economic rights, which included statements detailing the right of all humanity to form labor unions, earn a fair wage, have shelter, health care, food, and education.

Washington and its cohorts knew that including these in any declaration of human rights would make the world they hoped to help build — the world we live in today — pretty much impossible. After all, without the commodification of food, education, shelter, and health care, how would the financial-corporate nexus control the world like they do now?

Julie Wark’s book is a revolutionary tract. All it does is demand that the human rights claimed by the wealthiest and most powerful in our world be applied to everyone. It is a shame that such a demand has become a call to revolution. But, if that’s what is demanded, then we would do well to begin.