After years of watching Washington and its NATO alliance entice and cajole traditionally Russian allies to join the western capitalist sphere, Moscow has recently begun fighting back. 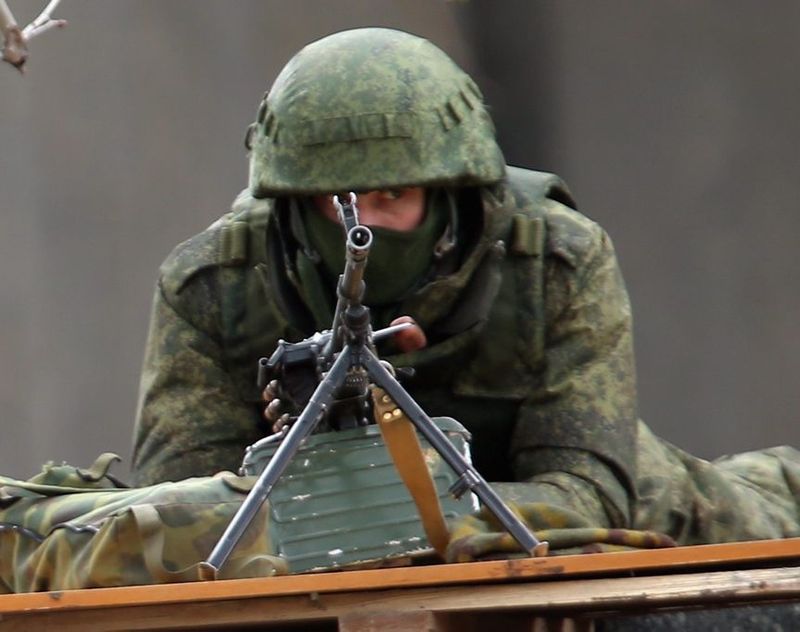 Solider in unmarked uniform guards the airport in Crimea. Image from SundayWorld.com.

Recent events in the Ukraine are even more center stage since the voters there elected to become independent.

Although there are some questions about the complete veracity of the recent referendum, the common understanding seems to be that enough residents of Crimea no longer wish to be part of Ukraine. Whether or not they want to be independent or part of Russia (and whether or not they have much choice in the matter) remains the unanswered part of the equation.

In the wake of the recent regime change in Ukraine and the new regime’s coziness with Washington and Brussels, it is clear that Moscow prefers a Crimea that is not part of Ukraine. After all, Crimea has been Russia’s access to a warm water port for more than a century and the loss of such a port would certainly put a damper on Moscow’s hopes to expand its trade and compete with other capitalist powers.

Prior to the aforementioned referendum, the Russian Duma passed legislation authorizing the movement of Russian troops into Crimea. In response to this, Washington threatened unspecified “costs.” Secretary of State Kerry told the world that “You just don’t in the 21st Century behave in 19th Century fashion by invading another country on completely trumped-up pretext.”

Besides the obvious hypocrisy of the statement by a representative of the one nation in today’s world which does exactly this every couple years, this sentence from Kerry glosses over the larger geopolitical and economic issues in this tête-à-tête.

Despite repeated calls by the international community, Russia continues to violate Ukraine’s sovereignty and territorial integrity, and continues to violate its international commitments. These developments present serious implications for the security and stability of the Euro‑Atlantic area. NATO Allies stand together in the spirit of strong solidarity in this grave crisis.

In other words, NATO will do what it decides is best for Washington and its definition of stability, which currently runs counter to Moscow’s definition.

The elected-then-overthrown government in Kiev was headed by Viktor Yanukovych, who was popularly elected despite the fact that his government was incredibly corrupt. After he rejected a pending Ukraine-EU association agreement in November 2013, Ukrainians opposed to Yanukovych took to the streets of Kiev and began an occupation of its Maidan Square. The protesters were composed of Ukrainians from many walks of life and of various political persuasions.

Although the protests were originally portrayed by the Western media as being organized around a supposed desire of some Ukrainians to join the European Union, it became clear that there were numerous other issues involved. Some were historical in nature; for example, many Ukrainians desiring closer ties to the West are Roman Catholic, while many of those supportive of Russian ties are Orthodox. This conflict is as old as those two Churches. Yet, like every supposedly religious quarrel, there are economic and political reasons present as well.

The last Crimean War occurred in the mid-1850s. It was nominally over which element of the ancient Schism would protect the holy sites in Palestine.

The last Crimean War occurred in the mid-1850s. It was nominally over which element of the ancient Schism would protect the holy sites in Palestine. Of course, it was really about much more. Like Karl Marx and Friedrich Engels wrote in their series of reports and letters for the New York Daily Tribune during the Crimean War:

We are astonished that in the current discussion of the Oriental question the English journals have not more boldly demonstrated the vital interests which should render Great Britain the earnest and unyielding opponent of the Russian projects of annexation and aggrandisement. England cannot afford to allow Russia to become the possessor of the Dardanelles and Bosphorus. Both commercially and politically such an event would be a deep if not a deadly blow at British power.

Marx and Engels rightly wrote that the first Crimean War was essentially about Turkey and which world capital would dominate trade with that nation. Today, it is just as correct to write that the developing situation in the Ukraine is really about which capital will dominate not only trade with Kiev, but also who will service its debt.

For Russia, the trade element is very important, given how much of the petroleum and natural gas sold by Russia is transported across the Ukraine.

For Russia, the trade element is very important, given how much of the petroleum and natural gas sold by Russia is transported across the Ukraine. Those products are sold to several European nations, some of whom get much of their natural gas from Russian fields. As for Washington, the rise of their man Yatsenyuk to the top of the pile in Kiev (he is the current president installed February 27, 2104) makes it clear that servicing the debt that Kiev will certainly incur if the current regime remains is an inviting prospect to the U.S.-based financial industry.

Indeed, the former banker Yatsenyuk was almost certainly installed because of his friendship with a few billionaires, support from Washington, and an understanding that he would profit from selling off his country to that industry. No less than the Wall Street magazine Forbes reported on March 1, 2014, “Ukraine’s interim prime minister, Arseniy ‘Yats’ Yatsenyuk, may prove to be arsenic to the beleaguered nation.”

The report continued, “Also today, Yatsenyuk promised to implement “very unpopular measures” to stabilize the country’s finances. The government said it needs $35 billion to support the country over the next two years. His language in a news report broadcast by Bloomberg today indicates he is heading toward a potentially destabilizing austerity campaign.”

The circumstances unfolding in the Ukraine are part of a potentially volatile chess game between various powers.

The circumstances unfolding in the Ukraine are part of a potentially volatile chess game between various powers. Since the fall of the Soviet Union, Washington has been the dominant player on that game’s board. Russia has been at best a bit player, in large part because it unreservedly embraced the neoliberal shock doctrine. That embrace brought drastic and punishing changes to Russia’s people, its national economy, and its international reach.

This is slowly changing. After years of watching Washington and its NATO alliance entice and cajole traditionally Russian allies to join the western capitalist sphere, Moscow has recently begun fighting back. Most notable in this regard are its military incursion into Georgia several years back, and its determined support of the Assad regime in Syria despite pressure from most governments to end that support. Furthermore, it has also strongly opposed Washington’s plan to place missile defense systems in countries along its western border.

To put it simply, Russia is tired of the imperial dominance of Washington and is moving back into the fray. The manipulation of the Ukrainian elections and the subsequent overt and covert moves by the U.S. and the EU may well be the final straw. This is especially true now that the Moscow-friendly Yanukovych government in Kiev has been replaced with a regime that seems tailor-made to Washington’s tastes.

In the middle are the people of the Ukraine. Their manipulation by outside forces since the fall of the Soviet Union is a confusing, occasionally tragic replay of their long history as a people. Their voice is becoming dimmer as outside powers raise the stakes. The presence of neo-nazi elements in prominent positions in the opposition has diminished support for the protest movement.

According to individuals and small groups inside Ukraine that have posted on the internet or emailed me, the dominant theme of the Maidan protests seemed to be a mildly pro-western Ukrainian nationalism, somewhat liberal as far as social issues are concerned and neoliberal economically.

The future remains an open question. What I write today is based on what has happened. Tomorrow will add another element or more to the unfolding equation.

Read more articles by Ron Jacobs on The Rag Blog.