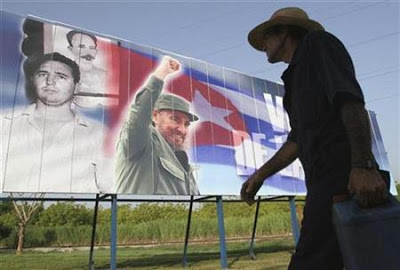 Pastors for Peace leader Rev. Lucius Walker spoke of these 50 years of practicing solidarity as what Jesus Christ would have wanted the human race to emulate: constant support for the poor, the hungry, the thirsty, the sick, the exploited and imprisoned.

[This is the first of a two-part series on the 50th anniversary of the Cuban Revolution by Rag Blog contributor Ron Ridenour.]

Half a century after revolutionary guerrillas victoriously entered Havana, state and grass roots organizations are preparing liberation activities over the entire country. Thousands of solidarity activists and supporters from around the world are joining in. Besides celebrating, many want to know what’s next: will Cuba go the way of China or will its socialist roots develop stronger?

I worked for Editorial Jose Marti and Prensa Latina (1987-96), and have been here on extensive visits in 2006 and currently. I have written five books about Cuba and hundreds of articles. To understand the Cuban revolution is a life study. For the present, I intend to narrate my impressions of some of its reality. A definitive description or analysis is beyond my capacity.

“Ser internacionalista es sladar nuestra propia deuda con la humanidad.” (To be internationalist is to settle our own debt with humanity.)

This is a billboard, the first I remember seeing upon arrival in 1987, that expresses the morality with which this revolution began and its performance in nearly half the planet. In a recent Cuban education channel broadcast, Walker wished that his country — the USA — would take up Cuba’s living example.

The revolution’s solidarity ethic started at home. From the first, racism was officially abolished everywhere. Small farmers and would-be farmers were given up to five caballerias (13.42 hectares per caballeria) of land to till as promised during the armed struggle against US-backed dictator Batista. The new president, Raul Castro, has just extended this by one or two caballerias for the most productive. The rest of the land, bought from private owners (national and international), was turned into large state collectives and smaller cooperatives. In recent years, almost all the collectives have been converted into more productive cooperatives, both private and state run.

Illiteracy was soon eliminated by 100,000 educated youths teaching 23% of the nation’s illiterates. Promptly, all children were attending school free of charge whereas before 44% of primary school-aged children did not attend school and only 17% of secondary school-aged children did. In these 50 years nearly one million students have graduated from universities. Today, there are nearly 100,000 students who study full time in 65 universities, plus some 400,000 who study at university level in 3,150 localities in all 169 municipalities. Under Batista there were 20,000 students attending the three state and one private universities.

A nation-wide health care system was immediately underway, free of charge. Statistical results show its significance for each and every Cuban. In 1959, infant mortality was at 78.8 per 1000 births; in 2007, it was down to 5.5. Life expectancy was 62 years. Today it stands at 77. There was only one doctor for every 1,800 inhabitants, in 1959, after half the 6,000 doctors had fled upon the revolutionary victory and following the elimination of private practice. But only a few in the population of 5.5 million were being served. Today, with 75,000 graduated doctors since the revolution and with 11.5 million people, the rate is one to 150. However, nearly half of those doctors are on foreign missions in 68 countries, and several hundred have fled to other countries seeking greater economic opportunities. This places a greater burden on some 30,000 doctors within the country who must care for a greater numbers of patients.

Cuba produces 12 of the 13 vaccines it inoculates each child with. The nation has an exceptional modern biotechnology industry and has developed unique medicines and vaccines, including the world’s only meningitis B vaccine.

The revolution is also renowned for its excellent sports and culture programs, for its superb athletes, musicians, film makers, detective novel authors, ballet and other dancers.

The nation’s workers and farmers were also set on a solidarity course to serve and produce not just for their benefits but for the entire nation. In the early 1960s, two forms of economic systems were experimented with. One was led by the revolutionary idealist Che Guevara, the other by Carlos Rodriguez, a leader of the Communist Party, which had not joined the armed struggle. In the efforts to create the “new man” in economic production and in the political decision-making process there were some advances but many setbacks, about which I will address in a second story.

The export of “human capital,” as the state characterizes its humanitarian missions, began in 1963 in Africa and Latin America, later in the Caribbean and other parts of the world, by assisting peoples’ health and educational needs as well as helping to remove them from the domination of exploitative imperialism. Cuba provides more medical humanitarian international aid than all the UN countries deployed through the World Health Organization.

Today, nearly 100,000 medical personnel, teachers, sports instructors, technicians and advisors are serving in 104 countries. In the medical arena alone, over 10 million people, in 68 countries, have been treated just this decade. Millions of people have been aided in a score of countries hit by natural disasters, such as, in 2006, Pakistan, a US war ally. The new Cuban-created Operation Miracle has cured upwards to half a million blind patients in 25 countries just since 2004. With Venezuela’s oil profits, and Cuba’s doctors and those it is training in Venezuela, the Venezuela-Cuba plan is to cure 10 million Latin Americans within a decade. Their blindnesse is mostly caused by malnutrition, and this plan coincides with progressive programs to increase national food production through cooperatives and small farming.

Presidents Fidel Castro and Hugo Chavez began discussing the creation of a regional socio-economic and political alliance based upon mutual aid and bartering soon after the right-wing coup attempt in Venezuela, in 2002. The Bolivarian Alternative for Latin America (ALBA) took root in 2005. Today, with six countries — Nicaragua, Bolivia, Honduras and Dominican — several billion dollars worth of joint projects are underway. This also includes inexpensively sold oil from Venezuela to these countries and the newly formed Petro Caribe alliance.

These socialist oriented programs and alliances were conceived of by Fidel when he received Chavez fresh out of jail two years after his imprisonment for leading the insurrection, in 1992.

“The coming century for us is the century of hope, the century of the resurrection of the Bolivarian dream, the dream of Marti, the Latin American dream.”

President Raul Castro cited his brother’s words in his speech, this December 15th, at a ceremony in Venezuela. In honor of ALBA’s accomplishments and is future agenda. Raul concluded with: “The dreams of yesterday begin to become reality.”

Other important aspects of Cuba’s generous solidarity are its military assistance to other peoples in maintaining or acquiring their sovereignty. This is especially the case in Angola and with important side affects for Namibia and South Africa. Between 1975 and 1990, Cuba sent 300,000 soldier volunteers to Angola to help defeat the invading apartheid government of South Africa, backed by the US. They sought to impose brutal counterrevolutionary groups in power, who would do the empire’s biding.

Raul Castro referred to Cuba’s African role at the December summit meeting of 33 Latin American and Caribbean nations meeting in Brazil. Once the future of Angolan sovereignty became guaranteed, the liberation of Namibia was assured, and this added significantly to the internal struggle for black South Africans’ liberation soon following the release of Nelson Mandela from prison. Mandela came to Havana to express his gratitude for Cuba’s solidarity.

This unique summit in Brazil was especially important for Cuba. Of the various Latin American alliances, Rio Group is an important political forum and it embraced Cuba as a member. Fidel Castro was not able to attend but because of the historic role he played as Cuba’s key leader, and elected president between 1976 until 2007 when, due to ill health, he stepped down and his brother won the elections, he received the strongest applause of all from the forum. The historical role played by Cuba in promoting Latin American sovereignty and integration, and the concise and sharp speeches of President Raul Castro, occupied Brazil’s, Mexico’s and most of Latin Americas front pages during the summit.

The joyous mood of Latin America’s leaders expressed the new liberating wind blowing throughout this continent. Their message is: it will not be stilled by the empire now entering its decay.

Beyond exporting solidarity and its key role in continental integration, Cuba offers extensive and advanced educational opportunities free of charge to tens of thousands of foreign students in Cuba. In recent years, an entire medical school (ELAM) is dedicated to educating foreign students from some 30 countries, including poor US citizens.

However, there are many Cubans who are not so happy about their nation engaging in the world’s most extensive solidarity policies. There is an increasing gap between the new rich and the new poor within the double economy—one in pesos and one in convertible currency. The low-cost subsidized rationed goods are too sparse to meet the very basic needs of daily life. Most earn their living in pesos and this creates divisions in the population, and even animosity within the medical profession since doctors at home earn only pesos while the foreign mission “volunteers” earn pecuniary rewards that permit many to return home with luxurious hardware and other goods not possible to obtain on the peso economy.

Cuba is the home of my heart, all the more reason to be truthful of its warts. One cannot truly love a people nor have confidence in them if one hides from real problems and shortcomings. That is the subject of the next piece.

[Ron Ridenour, a regular contributor to The Rag Blog, is an award-winning writer and author whose special interest is Latin America. Ridenour was a sixties activist who wrote and edited for that decade’s underground press. He now lives in Denmark and also posts at http://www.ronridenour.com/.]