This is the first of an eleven-part series from long-time activist, traveller, and author Ron Ridenour. He very kindly asked us to publish this wonderful story of his experiences in Latin America titled Sounds of Venezuela. We will publish a new episode daily for the next 10 days. We hope you enjoy it. 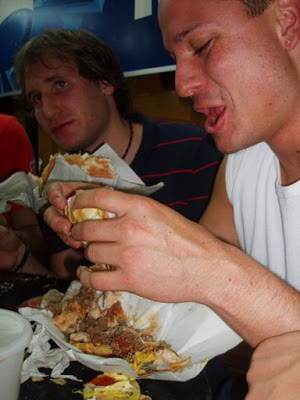 I lived at the end of Hunger Street.

My ubiquitous nose quivered with smells of grilled meats smothered in spicy sauces. The warm humid air urged enticing odors inwardly as I passed the row of food stands on the short street, La Calle de Hambre, walking with bags in hands towards the wooden house behind the mango tree budding green.

My mission: absorb the new Venezuela vibrating with change, advancing essential life conditions for the multitudes of poor, rebuilding the vast fallowed lands, bringing pride throughout this magnificent undulating land; bringing strife, as well, from the national rich and powerful, and spewing sulfur from Bushland.

A wonderful revolutionary guide was provided. Diego found me a humble room in the family house where I lived for two months amongst a lively variety of insects, reptiles and rodents; ducking under falling plaster, falling asleep between hair-raising car alarms ticked off by black cats.

Diego warned me right off: Don’t go out alone after dark; always keep your gate and door locked; beware of speaking as a revolutionary; use deodorant on your smelly armpits.

This former soldier side-kick of rebellious commandant Hugo Chavez—a man of the people—took me into people’s real lives. Diego, his suave, tight-lipped smile hovering above a bushy black mustache, showed the way into their homes, their offices, work places, land cooperatives, into their schools, even into the mayor’s office.

Rosa León, The Rose Lioness, won La Victoria’s 2004 mayor election with 56% of the votes in which 54 political parties participated as well as three independent candidates. (Only 40% of the voting population, however, went to the polls.) Her party, the Venezuela Revolutionary Movement (MVR), led with 39% in the nine-party leftist coalition. Her rival, Mayor Luis Blanco and his nine-party coalition, lost with 27% of the vote.

I cite these uncontested figures as an example of how democratic and fair the many elections have been since Hugo Chavez first won the presidency. There have been a dozen elections since 1998 for presidency and or the legislature, state and local posts, and national referendums. The only one Chavez lost was the referendum in December 2007—by one percent of the vote—which would have deepened the transfer of power and benefits for the working class; and it would have allowed any president to run for that office continuously, as is the case in many European democracies.

León won a legislative seat in this state of Aragua, in 2000, upon graduating with a law degree at age 23. She had gained the respect of the dashing uproar President Hugo Chavez when she campaigned for his presidency and then defended it when he was forcibly removed in a coup d´état, in April 2002, backed by most mass media and the US.

Once elected mayor of the Municipality of Ribas, Rose embarked on her mission of “turning power over to the people,” “…creating equity, cooperation, liberty and social justice.” She sought to benefit the vast numbers of poor and disadvantaged in this municipality of 140,000. Some projects began to take seed within the budding grass roots democracy. Others floundered. Some never began. Many grew disillusioned. The Lioness was in trouble.

A community worker introduced me to Rosa at the 23rd of January celebration in the barrio by the same name. That day, half-a-century ago, tens of thousands of the poor in Caracas stormed the streets to oust one of the Pentagon’s favorite dictators, General Marcos Pérez Jiménez. Leftist political parties protested too; unionists struck. The mass forced Jiménez’ to flee; the bourgeoisie consolidated to maintain power. The left remained ineffective. Some took the decisive step to engage in guerrilla warfare, including the Communist party (PCV), but that failed. Soldier Chavez tried a military rebellion in 1994. That failed. In 1996, upon his early release from prison, Chavez forged a broad coalition of the poor and progressives to engage in parliamentary process, which succeeded in 1999.

The streets of this poor barrio, like hundreds more throughout the nation bearing the honorable name, filled with people chatting, some held forth hands and good advice to the young mayor. There were police too. Many were unarmed women with fair public rapport.

Rosa gave me a warm handshake. We agreed to an interview in a few days. In the intervening time, I visited a Mission Ribas in which hundreds of thousands throughout the nation, who had not been able to go to school, learn basic reading, writing, arithmetic skills. I spoke with social workers, voceros (spokespersons) of the new community councils, and people on the streets. I heard praise and complaints of the revolutionary process. Most were still quite enthused by President Chavez but most were also so critical of Rosa León that many asserted they would not vote for her again in the next elections (November 23, 2008) for 23 state governors and 335 municipal mayors. The majority of elected leaders are supporters of the Bolivarian Revolution. The right-wing feels hopeful in scaling down Chavez backed elected leaders.

The Bolivarian Revolution’s mainstay is its 20 missions, which President Chavez launched beginning in July 2003. Mission Robinson eradicated illiteracy with the use of Cuban techniques and personnel. In two years, 99% of the 1.5 million illiterates had learned to read and write and Venezuela declared itself “Territory Free of Illiteracy”. The other missions seek to end poverty, implement social welfare programs, reduce environmental degradation, provide comprehensive and community heath care, construct new housing for the poor, restore communal land titles and human rights to Venezuela’s numerous indigenous communities, expropriate and redistribute lands to the poor, and foster an economy that brings “a quality and dignified life for all.”

Some 70,000 Cuban experts assist these missions, as well as in other areas.

Life of most Venezuelans has clearly improved during the Chavez years. According to governmental statistics, 2007, indications include: social consumption per person has increased by 300%; GNP has sky-rocketed by 100% with about 10% annual growth; poverty has fallen from 51% to 25%.

But people complain and, perhaps, even more so when their living conditions are improving but are yet insufficient. In La Victoria rumors have it that Rosa has a helicopter and is afraid to be in some areas. The rich and right-wing, even some workers and poor people, blame Rosa for everything from not ending the corruption chronic among local politicians and civil servants, the high murder and theft rates, to the omnipresent potholes.

2 Responses to Ron Ridenour: Sounds of Venezuela, Part I