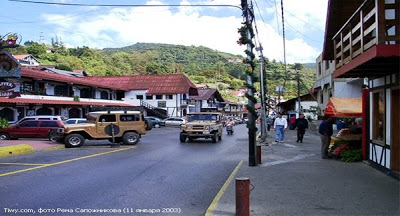 A tall man with long flowing curly hair and warm eyes met me early the morning after a drinking bout in a local bar. Carlos was a friend of a friend, Juan Luis, both were teachers and Carlos was a long-distance walker. He took me to the nearest mountain on the outskirts of La Victoria for a day’s walk.

I was exhilarated with the first steps up a dirt path. Trees surrounded us. We were alone for six hours of climbing up and down much of the mountain. There were a few wooden houses scattered on the side of the path wide enough for a car, only one of which we saw. Although quite isolated, these houses enjoyed running water from a mountain stream and electricity brought in by the government.

We passed a coffee plantation no longer being cared for. Carlos explained that the owner spent most of his time in Spain, his birth place, and neglected the farm. Apparently there wasn’t enough profit in it.

We stopped to eat a lunch we brought and I swam in a pool of the stream. We chatted while listening to the guacharaca, the only sounds we heard, apart from the eternally rolling stream. We enjoyed listening to the chattering, social tree-dwellers, which feed on abundant seeds and fruits found here. Carlos told me he taught mathematics at the local technical college while his wife taught in Maracay’s Mission Sucre. They saw each other only on the weekends. He supported Chavez and the grass roots revolution but was discouraged by so much inefficiency and corruption. Like many other intellectual workers, he remained on the sidelines although he voted for the process.

When we reached the bottom of the mountain, we walked another kilometer to Juan Luis’ “summer house”, delicately resting on an incline and partially hidden by skinny trees. He and his girl friend come to this rustic place most weekends. While Juan Luis and his lover prepared seafood snacks, a neighbor boy, who watches over their place and a handful of chickens, made coffee a lá fagón—fireplace style—which tasted especially stimulating after 25 kilometers walking in thin tennis shoes.

Carlos and I planned another trip soon. I spent the next days learning, looking forward to our next trip, this time to the very top.

Atop this 2000 meter mountain sits a unique town, Colonia Tovar. The 3,500-hectar area was settled by German farmers from Bavaria, in 1843. To this day, the well-maintained, colorfully painted buildings have Bavarian characteristics. The town is unusually clean and quiet, reflecting a European life style albeit none of the 6,000 residents are actually German, and nearly no one even speaks German.

We had climbed seven hours straight up. We passed the abandoned coffee farm, then some fruit trees cared for by a lone farmer, and stopped at a cluster of houses served by one little store. It was crammed with cartons of Yankee products: Colgate, Nestle, Toms, and, of course, Coca-Cola. The Colombian store-keeper was unaware of the boycott against the Death Squads’ Drink. Carlos’ young cousin was with us this time; he deferred to my request and drank a national soda instead of the all time favorite sugar drink.

We pushed onward and upward. I was surprised how well I—a smoker—kept up with a man in his mid-40s and another in his mid-20s, but the going was tough. Our legs were never planted straight, always stretching at an incline, sometimes required to jump onto rocks laid across the stream, which frequently criss-crossed our path.

As we neared the top, we saw small plots of land planted in strawberries, potatoes, coffee and peaches. Carlos wished to visit one such farm. As part of an education mission for which he had volunteered, he had once taught a girl who lived here. We soon found the house, quite unmistakable for its handsome and solid even stately character.

Pedro and his wife are the owners. His grandfather had built the two-story house and it was long ago paid for. His two teenage daughters, one had been Carlos’s student, also live here. Pedro showed us his 1.5-hectar farm. He was proud of his sweet-tasting peaches and strawberries, and nutritious potatoes. He and his family earned a decent living from this small farm. They had a jeep, two TVs, refrigerator, stove, washing machine, all the modern necessities. They ate some of their produce, including chickens and eggs, and sold the rest. They had enough money leftover to buy a CD or DVD from time to time. True, they had no rent and all the residents in this municipality get their water and electricity free. The house was clean, and decorated with flowers from the garden. It looked so different from the eye sore, dirty house I stayed in.

The family supports Chavez, as do the majority in this area, despite their German heritage and being private farmers. How one man, with family help at peak times, can till just one-and-one-half hectares of land on a steep incline, keeping it cleared of weeds, and earn enough for all they owned and not be in debt—while the two cooperatives I had visited were so far from nearing this accomplishment—is such a big question that I can’t enlighten anymore than I have: discipline, dedication, sense of ownership responsibility.

Once at the welcoming arch-gated entrance of Colonia Tovar, and despite our tiredness, we three men of three generations dashed for the tavern selling its own brew, a lá Bavarian. Cool, light, distinguished taste. The tavern blended the cleanliness and order of Germany, the flowers and warmth of Venezuela. Unfortunately, we had only time for two of their local brew. After the day’s trek, we weren’t about to walk down the mountain. The last bus to town left at 16:00, so we had to rush.