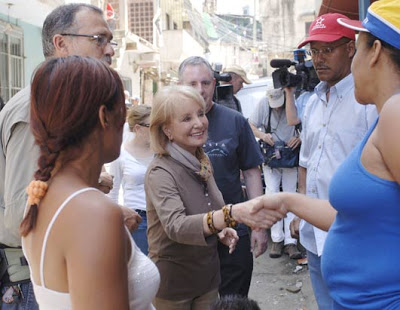 ABC News’ Barbara Walters, to prepare for an interview with Chavez, visits Santa Criz del Este, a famous barrio in Caracas. Jose Gregorio Cedeno, in the red cap, is president of the community council. Doris Seren, in blue, is a teacher and member of the council. Credit: Donna Svennevik/ABC. Source.

Participatory democracy: people actively organizing in the communities and attending meetings where local issues are discussed and solutions are proposed and voted on—is a major element of the Bolivarian Revolution. By August 2007, 2.2 million citizens were organized in 25,000 community councils (CC). In February 2008, community councils, their elected spokespersons and municipal officials and advisors engaged in lively meetings to evaluate progress and lay a course for the future. These meetings were followed by gatherings of two of the three largest and most important political parties backing this process: the new PSUV and Venezuela’s oldest, the Communist Party (PCV). I attended some of these events.

In Las Mercedes district, where I lived, nearly 100 members of five CCs gathered at a local hall. A large majority were women, mostly 40 years old and over. They met to consolidate their social organizing and take a position on a structural change proposal. Direct participation had allowed each CC to take individual directions but this was leading to a bit of chaos: differences in how to use resources, what programs took priority, which CC should house the local bank that distributes the funds allocated for community councils. Most of these funds come from the federal government, some from municipalities. These authorities were proposing that the structure be changed to accommodate a bit of centralization and control, which could lead to greater effectiveness.

I was surprised and impressed with how people openly complained about the failure of the municipal government to disseminate adequate information and provide basic training for community leadership and organizers, and about how people’s admiration for Chavez did not hinder several in objecting to the new proposal. A few rose in opposition to the mancomunidades proposal, which would bring several CCs inside an umbrella body that would work with authorities from “above” the individual CCs, as some viewed this.

“There is nothing in the law under which community councils operate that mandates such a direction,” said one opponent. “On the contrary, it speaks of direct power, and resources going directly to each council. Some of the municipal advisors are saying things here that is not the law, nor what Chavez has said.”

Another man spoke sharply from the podium:

“We lack training. We lack information from our local leaders. Some do not know how to manage administratively, either our projects or the moneys allocated. Too many of us are still driven by egoism. We have to learn how to motivate our councils, the spokespersons and our neighbors.”

The issue of where the bank administering CC funds should be located led to a hefty debate. The majority wished to move it from the CC where it was, because that council was not active and there was suspicion that the funds were not well utilized. Representatives from one council said the money they should have received was not forthcoming.

Solutions to these matters would be decided upon at another round of meetings and after street debate.

That evening I attended a local PSUV meeting. The main topic was the current round of CC meetings and the issue of mancomunidades. The general attitude among these one dozen members, mostly over 45 years old, was that “a small group tried to sabotage the assembly”, as the chairman characterized the protest. Not all were caught up in heavy-handed terminology and limited condemnations, and some saw the need to struggle internally to solve significant problems not being addressed by their local government. Among those was the lack of caring and adequate medical treatment at the hospital, which was raised by a retired doctor who volunteers at the local hospital.

After the meeting, five of us went to a café to imbibe in national brews. They asked my opinion on a variety of issues, and what did I see as the number one problem within the revolutionary process. I hesitated to render conclusions after such a short time observing, but they insisted. My spontaneous answer was: the lack of follow through.

Everyone agreed. Example after example plopped onto the wobbly table. I presented one and asked their opinion about the cause. I recalled what a young taxi driver had told me. As a supporter of the Chavez government, Gabriel had applied to take a Francisco Miranda course in Cuba. The idea behind this mission is to create a civilian cadre, which would form a military reserve for defense. The volunteers were often sent to Cuba to acquire a political understanding of revolution and some discipline. So far about 3000 had participated. My driver told me that when he returned from three months “enjoying the generous hospitality of Cubans, not the least the women”, there was nothing to incorporate into, there was no follow up at home. What little he considered he had learned in the brother nation he had forgotten with disuse. Gabriel was so disgruntled he said he would not vote for Rosa León again, albeit mayors have nothing to do with this mission.

Yes, that was all too familiar, the PSUV activists replied. “Lack of infrastructure; most people look after self-interests; some generals don’t want an independent militia; too much talk-not enough action.”

I encountered the same problem with the voceros. At the weekly meeting for all spokespersons of the more than 100 CCs, 17 showed up. They spoke about problems in advancing some projects, about too many activists meeting late or abstaining, problems balancing family, a job and volunteer work. One of the agenda items was an invitation for me to hold a lecture-seminar about communication, how to better reach people in the neighborhoods.

Many spoke enthusiastically about the need for learning. I could also offer advice about a newsletter soon to be launched. Agreement was reached on a day session with lunch and a date set. I prepared for this important initiative. I heard nothing in the week to come. The day before the event, I phoned the municipality’s paid coordinator of the voceros. Oh, he said evenly, no one arranged anything. He did not understand my disappointment and dismay of the frivolous manner of unfulfilling decisions.

Why is making a revolution so difficult?

Ah, imagine your neighbor Sarah. She gets her news from the national and international corporate media. She does what pleases her. If she doesn’t see the fun in doing something she doesn’t do anything. Yeah, we know a lot like her. It might even ring a bell inside. So, what does it take to have Sarah change into a person who wants to cooperate with many others, taking her time, using her energy to create something new, something great for everybody, if everybody works at it? Just what are the tools we need—mental and spiritual as well as physical and emotional ones—and how do we develop them? That is not so easy to conceive let alone practice and transform society in a few years, right?

Already, through the energy generated by the mass behind the committed leadership, wonders have been created. Alongside those I’ve portrayed earlier in these writings, is an essential and historical one. Vicente Vallenilla, the Venezuelan ambassador to Denmark, told me before I departed for his homeland:

“We say that what is happening now is real sovereignty, and for the first time in our history. We are taking our natural resources into our own hands. We are transforming from the sole objective of profit-making for a few to greater distribution of the wealth, commonly created, replacing the raw materialism of today with a more spiritual life tomorrow, one of sovereignty and independence, of wholeness in fellowship and, thus, happiness.”