Man, just read what this piece says: “… Conyers had negotiated with Rove’s attorneys for more than a year …” This says everything I need to know about the meaning of Congress. 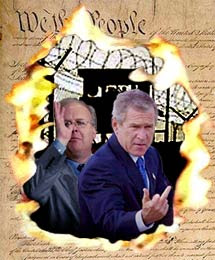 Accusations of politics influencing decisions at the department led to the resignation last year of Bush’s attorney general, Alberto Gonzales.

It’s unclear whether Rove will ever be forced to testify. The White House refuses to let him or other top aides testify about private conversations with Bush, citing executive privilege to block Congress’ demands.

The subpoena orders Rove to appear before the House panel on July 10. Lawmakers want to ask him about the White House’s role in firing nine U.S. attorneys in 2006 and the prosecution of former Gov. Don Siegelman of Alabama, a Democrat.

House Judiciary Chairman John Conyers had negotiated with Rove’s attorneys for more than a year over whether he would testify voluntarily.

“It is unfortunate that Mr. Rove has failed to cooperate with our requests,” Conyers, D-Mich., said in a statement. “Although he does not seem the least bit hesitant to discuss these very issues weekly on cable television and in the print news media, Mr. Rove and his attorney have apparently concluded that a public hearing room would not be appropriate.”

Conyers added: “Unfortunately, I have no choice today but to compel his testimony on these very important matters.”

Both Rove and his attorney, Robert Luskin, declined to comment.

This entry was posted in RagBlog and tagged U.S. Government, White House. Bookmark the permalink.