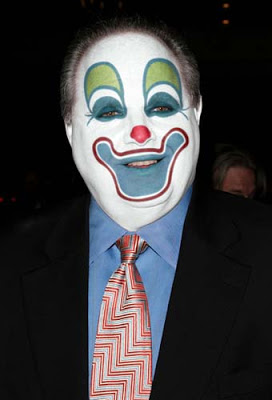 There’s one in every classroom. Competing with the teacher for attention, cracking jokes, disrupting the course of study. It doesn’t matter if few other students laugh along with him, a couple will do.

Later they meet in the recreation yard to idolize their rebel leader. This is the guy who will save them from having to read books and consider other people’s points of view, save them from being educated, indoctrinated into the modern adult order. Later, this is the kid who will hopefully give them a job, even though they never got a diploma, when he inherits his father’s auto dealership.

Who do you want to be like, the cool fat kid who mouths off in class or the poor hysterical obviously underpaid teacher? Disrespect can definitely work to make you respectable in the USA. Anti-intellectualism is still very often the smart way to go. We got this far being wrong, who’s going to stop us now?

That’s why so many people worship the ground Rush Limbaugh tramples on.

Rush to judgment (off the radio).

Rush to the hospital. In Hawaii, one of only two states in the Union to have fully socialized medicine. But that’s alright folks, Rushie’s rich and he has made sure to tell everyone that he is self-insured and paying his own way. Being rich will also protect him from having his insurance cancelled for having a problem with a “pre-existing condition.”

Just a few days ago he was castigating Obama for being in Hawaii, possibly not even really part of the USA. (That’s a fallback position in case it turns out BO was actually born there.) But that’s also okay, because Class Clown thrives on being able to drive inconsistencies home by force of his personality. Being wrong and still always sounding right is the best act he’s (we’ve) got. In America, relentless self confidence in the face of adversity/reality is the mechanism that has so far never failed to unlock the gold rush.

After the Gold Rush?

Word has it that Limbaugh’s words were halting and slurred when he called in to his guest-hosted radio show yesterday. Perhaps the man has had a stroke. Obesity, hard drug use and a generally apoplectic personality will eventually add up, even with the best of them.

Although he would never do the same himself for any of us, we would like to join the other members of the liberal blogosphere to wish Rush Limbaugh a speedy recovery.

Free speech is what we should all respect the most. In the world of words, being wrong is far better than being silent or being suppressed. If we are busy hiding lies we may just as soon be hiding the truth.

Class Clown should always have a place in our education system. Let the teachers stop the class to reason it out with the young person. Create a debate. Perhaps the heckler is right. (I sure thought I was. Still do.)

If we learn to take our time in the field of education we might not have so many “children left behind.” People with obvious intelligence but also an eternal ax to grind.