Ruthy and the Pedal People : Taking Out the Trash 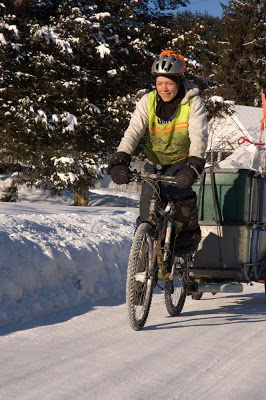 I like Ruthy’s special combination of valuing personal independence and community interdependence. I’ve rarely met a young woman who seems as fearless and sanguine about the world, even though she is wise to the hard things in life.

This week, my partner and I had a most interesting house guest. Ruthy Woodring arrived Monday night by train and made her own way to our house via foot power. She travels light, with her home-made back-pack, a small sleeping bag and a folding scooter. In past trips, she has sometimes traveled with her folding bike. She’s not only a bicycle advocate, she has helped create a bicycle-powered livelihood.

I had met Ruthy a couple of times before — once in Chicago when she was living at a Catholic Worker house. I remembered the beautiful garden she was cultivating there at the time, a productive plot of earth tucked into the urban landscape. Now, she and her partner, Alex Jarrett run a bicycle powered trash and recycling pick-up service in Northampton, MA. They began the business in 2002 and call themselves Pedal People.

Check them out on the web. They’ve established a brilliant niche in a green economy. Northampton doesn’t have municipal trash pick-up, so Ruthy and Alex entered the market by offering to take trash and recycling to the city’s transfer center via bike trailer — year-round. We’re talking winter in Massachusetts, and that’s serious business when you’re hauling 250 pounds through slush and snow. A page on their web site describes what they wear for the weather. If they can carry loads by bike all year in that climate, there is not much standing in the way of other such businesses operating in smallish towns all over.

Ruthy borrowed my bike while she was here to explore Austin, and she was quite impressed with our trails. The home she and Alex bought in MA was chosen because it backs up to a Rails-to-Trails corridor. Their household also has experimented with solar energy — using a single solar panel that they can move around, which powers their fridge (a chest-style, low-energy model) and a couple of LED lights. They have a garden and compost intensely.

I like Ruthy’s special combination of valuing personal independence and community interdependence. I’ve rarely met a young woman who seems as fearless and sanguine about the world, even though she is wise to the hard things in life and has been willing to give up her own freedom for a time when she spent 6 months in a federal prison for crossing the line at the School of the Americas. She thinks carefully about the resources she uses — food, water, even small, day-to-day materials. She left us with some colorful, home-made envelopes she had created during her train trip (she travels with a few tools, like scissors and a bike wrench) from pages of calendars she’d retrieved from her recent recycling pick-ups (a winter bonus).

Check out this article about Pedal People published in the last issue of Orion magazine. And here’s a quote from Ruthy I like from one of the interviews posted on the Pedal People site. When asked if she sometimes uses cars, Ruthy responds,

“Oh, sure, sometimes I carpool, hitch, take the bus or the train. But I try to keep my transportation simple and nonviolent. When I’m in a car, looking out at the houses and trees speeding by, I feel for those whose lives I’m unknowingly impacting — the people who live next to the highway who never hear quiet, the people who have to breathe the air I’m polluting, the people who lost their land to highway construction, their farms to sprawl and strip malls, the animals who can’t roam because they can’t cross the highway… I don’t think any of us uses resources in a way completely consistent with our beliefs. But for me, since I can bike and I like it, this is one way I can minimize my complicity in the violence done to our planet.”

Ruthy took off for Mexico on a late-night Greyhound, and we hope to hear about her adventures when she passes back through Austin on her way north next month. Since her visit, my partner and I have been even more aware of our own footprint on the earth, thinking about ways we can, like Ruthy and Alex, creatively problem-solve to live more compatibly with our neighborhood and planet. As always, the power of example is the greatest teacher, and Ruthy opened us to a wellspring of happy possibility.