Same Path of Intervention and Domination in Iraq 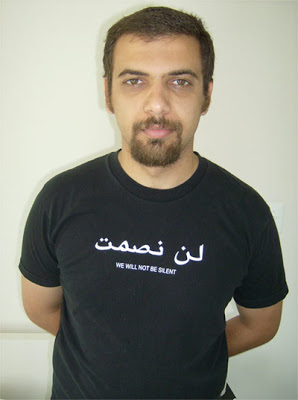 Raed Jarrar in the T-shirt that got him barred from a flight until it was covered
US-Iraqi agreement: leaked
By Raed Jarrar / September 1, 2008

I read about a leaked copy of the US-Iraqi agreement a few days ago when a radio station in Iraq mentioned some of its details, then it was mentioned in some Arab newspapers like Al-Qabas and Al-Sharq Al-Awsat. A couple of days ago, one Iraqi website (linked to an Iraqi armed resistance group) published the leaked draft on their web page for less than a couple of days before their website went offline. (Thankfully, I downloaded the 21 pages agreement and saved them before their server went down)

I spent this weekend translating it, and just finished now. you can read the 27 articles August 6th draft by clicking here or here or here. The title of this draft is “Agreement regarding the activities and presence of U.S. forces, and its withdrawal from Iraq”, but this is the same agreement that is referred to as a “status of forces agreement” or “SOFA” or framework or whatever. It’s the result of months of negotiations after Bush and Al-Maliki signed the “Declaration of Principles for a Long-Term Relationship of Cooperation and Friendship Between the Republic of Iraq and the United States of America” by the end of last year.

This leaked draft is a treasure of information. It’s the first time any document related to this topic is made public. It shows how weak the Iraqi negotiations team is (it is really pathetic to read their “suggestions” on how to fix the disaster of an agreement).

There are many outrageous articles in the agreement that violates Iraq’s sovereignty and independence, and gives the U.S. occupation authorities unprecedented rights and privileges, but what has draw my attention the most (so far) are three major points:

1- the agreement does not discuss anything about a complete US withdrawal from Iraq. Instead, it talks about withdrawing “combat troops” without defining what is the difference between combat troops and other troops. It is very clear that the US is planning to stay indefinitely in permanent bases in Iraq (or as the agreement calls them: “installations and areas agreed upon”) where the U.S. will continue training and supporting Iraqis armed forces for the foreseeable future.

2- the agreement goes into effect when the two executive branches exchange “memos”, instead of waiting for Iraqi parliament’s ratification. This is really dangerous, and it is shocking because both the Iraqi and U.S. executive branches have been assuring the Iraqi parliament that no agreement will go into effect without being ratified by Iraq’s MPs.

3- this agreement is the blueprint for keeping other occupation armies (aka Multi-national forces) in Iraq on the long run. This explains the silence regarding what will happed to other occupiers (like the U.K. forces) after the expiration of the UN mandate at the end of this year.

It is really disturbing to read how the U.S. government is still going down the same path of intervention and domination in Iraq.

This agreement will not be accepted by the Iraqi people and their elected representatives in the Iraqi parliament, and if the U.S. and Iraqi executive branches try to consider it valid anyway it will lead to more violence in Iraq.

Source / Raed in the Middle