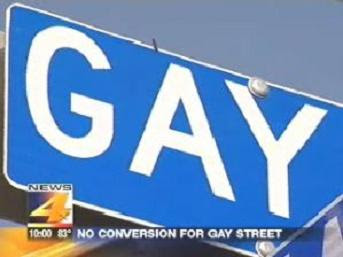 According to WOAI, the NBC affiliate in the Alamo City, San Antonio City Council has denied Second Baptist Church’s request to change the name of the street on which their church resides.

As the report points out, “Gay” is the name of a community activist of significance to the surrounding community, which wants the name of the street to remain Gay Street.

We think instead that the church should move a few blocks south to the corner of Gay/Hub.

A street on the East Side is in the spotlight because a church wants to change its name. But now it looks like that won’t be happening anytime soon.

News 4 looked into why this one request is getting so much attention.

It seems like a simple process. Second Baptist Church wants to change the name of the street that runs next to it, to Second Baptist Way. But it’s the name they’re trying to change it from that’s raising some eyebrows.

If Second Baptist wanted to change Edna Street or Bob Street, most involved in the debate wouldn’t bat an eye.

But the street they are trying to convert isn’t just any street, it’s Gay Street. Many people questioned why they wanted to change that street’s name.

Second Baptist said they simply wanted to reach out to the community more by changing the street to the church name.

“They could reach out into the community just leaving it the way it is,” said Gonzales. “I don’t see how changing the name of a street is going to help their community outreach efforts whatsoever.”

Those outreach efforts by the church ended right where they began on Thursday, at City Hall.

City Councilwoman Sheila McNeil requested that the name change be denied and the council agreed. By almost an unanimous vote, the name Gay Street was left as is.

McNeil said the neighbors who live around Gay Street want the name to stay.

According to neighbors, the street was actually named after a community activist. They say that’s part of the reason the name has stayed and why the want it to continue.