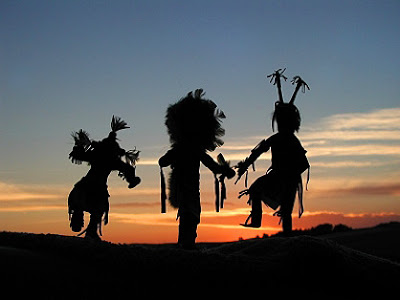 Native American dancers in Arizona.
‘Ruling in the case to protect the environmental and cultural integrity of Arizona’s San Francisco Peaks’
By Brenda Norrell / August 9, 2008

The federal court’s decision to reverse the earlier ruling magnifies the reality of the collapse of both U.S. democracy and the separation of powers in the United States three branch government. The separation of powers was designed to prevent the executive branch from interfering in the decisions of the high court.

Further, the federal court’s decision violates U.S. federal laws and the recently adopted U.N. Declaration on the Rights of Indigenous Peoples, pointedly Article 12 which states Indigenous Peoples have the right to carry out their ceremonies and culture.

In Flagstaff, the Save the Peaks Coalition released a statement after the Ninth Circuit Court of Appeals issued the long awaited ruling Friday in the case to protect the environmental and cultural integrity of Arizona’s San Francisco Peaks. “The split decision overturned a previous court ruling and has temporarily denied attempts by tribes and environmental groups to stop Arizona Snowbowl Ski Resort from expanding development and making fake snow from treated sewage effluent on the holy mountain.”

“The cultural survival of more than 13 Indigenous Nations is directly intertwined with the environmental integrity of the holy San Francisco Peaks,” said Jeneda Benally, a volunteer with the Save the Peaks Coalition. “Today’s decision not only places these ways of life in peril but sets the stage for an ecological and public health catastrophe. We have no choice but to uphold our commitment to protect the holy San Francisco Peaks,” continued Benally.

The United States Forest Service manages the San Francisco Peaks as public land and has faced multiple lawsuits by the Navajo Nation, Hopi, White Mountain Apache, Yavapai Apache, Hualapai, and Havasupai tribes, as well as the Sierra Club, Flagstaff Activist Network, Center of Biological Diversity, and others after it initially approved the proposed ski area development in 2005.

The Coalition pointed out that in the most recent ruling, the Court found that using reclaimed sewer water to make snow for skiing on an admittedly sacred site posed no ‘substantial burden’ on the Plaintiffs’ exercise of religion in this case.

American Indian Nations primary arguments focused on religious issues by utilizing the Religious Freedom Restoration Act (RFRA), which they had hoped would provide the necessary legal protection where other laws such as the American Religious Freedom Act have failed.

“The opinion is unfortunate and, in my opinion wrong,” stated Howard Shanker, who represents Navajo Nation, Havasupai Tribe, White Mountain Apache Nation, Yavapai-Apache Nation, Sierra Club, Center for Biological Diversity, and the Flagstaff Activist Network. “The Court places itself in the position of judging the legitimacy of Native American beliefs and practices. It becomes the arbiter of religion which is not the proper role for the courts. The evidence clearly shows that the Peaks are important to 13 of the Tribes in the southwestern United States and that using sewer water to make snow on them constitutes a significant burden on the Tribe’s ability to practice their religion.”

“In this country Native Americans have no First Amendment rights when it comes to government land use decisions,” stated Howard Shanker, who is also running for Congress in Arizona’s Congressional District 1. “The federal government likely holds thousands of acres of land that Tribes hold sacred. This case was the last, best chance for the Tribes to be able to provide some legal protection to those lands. In a nation that prides itself on religious liberty, it is unconscionable that Native American beliefs are not respected under the law or the Constitution. We anticipate petitioning the U.S. Supreme Court for review of this matter,” said Shanker.

“This ruling sets a negative precedent that impacts the future of Native American religious practice,” said Francis Tso of the Save the Peaks Coalition. “We will seek to reverse this appalling decision.”

The three dissenting Judges from the en banc Court argued that, “Religious exercise, invariably, and centrally, involves a ‘subjective’ spiritual experience.” The dissenting judges further provided that, “The majority’s misunderstanding of the nature of religious beliefs and exercise as merely “subjective” is an excuse for refusing to accept the Indians’ religion as worthy of protection under RFRA.” As noted by the dissent, “RFRA was passed to protect the exercise of all religions, including the religions of American Indians. If Indians’ land-based exercise of religion is not protected by RFRA in this case, I cannot imagine a case in which it will be. I am truly sorry that the majority has effectively read American Indians out of RFRA.”

“This decision is a painful affirmation of the lack of protection for our religious freedom,” said Alberta Nells with the Youth of the Peaks. Nells continued, “It is a bitter reminder that not all citizens are equal in this country, but just as the civil rights movement did not give up when courts delivered blow after blow, we will not give up until our rights are fully upheld. We, the youth, will continue to stand up for our cultural survival.”

“Federal land management policies are inconsistent when addressing Native American religious practice relating to sacred places. This case underscores the fact that we need legislative action to guarantee protection for places held holy by Native American tribes”, stated Klee Benally of the Save the Peaks Coalition. “The deeply held religious beliefs of hundreds of thousands of citizens of this country have been trumped by a single for profit private business operating on public lands. What I keep wondering is ‘How is that considered justice?'” continued Benally.

Environmental groups argued that the Forest Service violated the National Environmental Policy Act. “Eight of eleven judges decided to completely ignore the issue of ‘What happens if a child were to eat this snow?'” said Rudy Preston of the Flagstaff Activist Network and a plaintiff in the case. Preston continued saying that, “The court dismissed the whole health issue on a procedural error thereby refusing to comment on the true health impacts of this fake snow, which has been proven to contain harmful pharmaceuticals and personal care productions, on our children. The court has obviously cast off this responsibility, and we will continue to demand accountability for our children and the land.”

Environmental groups are concerned with the health hazards of using treated sewage effluent to make this snow, and are committed to continuing to challenge this ruling. “We obviously disagree with ruling-snowmaking with sewage is still plainly a bad idea,” said Taylor McKinnon, Public Lands Director with the Center for Biological Diversity, “We’ll keep fighting along side our partners. This ruling only emboldens our resolve.”