Sarah Palin and the Anti-Abortion Terrorists 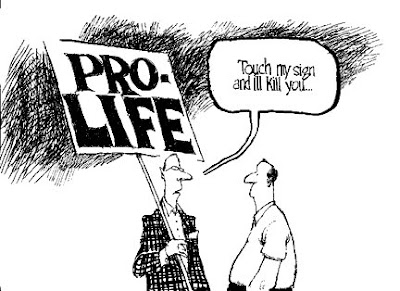 Sarah Palin gave anti-abortion terrorists ‘a wink and a nod.’
by MissLaura / October 25, 2008

n. The unlawful use or threatened use of force or violence by a person or an organized group against people or property with the intention of intimidating or coercing societies or governments, often for ideological or political reasons.

Sarah Palin, as Meteor Blades wrote, gave anti-abortion terrorists a wink and a nod when she refused to use the word “terrorist” to describe clinic bombers.

At Blue Hampshire, Mike Caulfield has a list of their victims:

What’s chilling is that that list was compiled from an anti-abortion site. As Mike pointed out to me in an email, when people look at the escalating rhetoric around the McCain-Palin campaign and directed at Obama, and say “this could lead to violence,” they ignore that it has already led to violence.

Clinic bombers and shooters don’t just intend to kill or maim — they intend, entirely literally, to terrorize. To make others too fearful to provide or seek abortions. It is an act of violence with the intent of intimidation or coercion, for ideological or political reasons — the very definition of terrorism.

And it’s working. Restrictive state laws are not the only reason 87 percent of American counties lack even one abortion provider. No, the threat of terrorism is largely responsible for that.

And this once, Sarah Palin’s outrageous answer came not from ignorance but from knowing intent. It’s one more reason it’s so important to do more than merely defeat her on November 4. We have to repudiate everything she stands for.

Opponents of a woman’s right to choose are doing everything they can to take away that right. While this post focuses on violent means, they are also seeking to overturn Roe v. Wade. Right now, South Dakota is the front line in that battle. You can help by giving to the South Dakota Campaign for Healthy Families through the Orange to Blue list.