Sarah Palin : Dinosaurs and Men on Earth Together 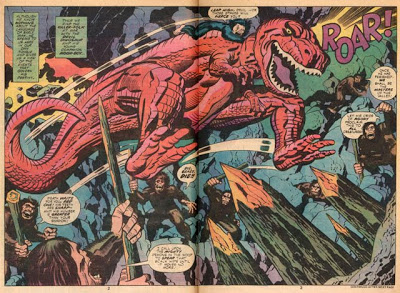 Devil Dinosaur #2.
According to Palin the two species coexisted 6,000 years ago, about 65 million years after dinosaurs are believed to have become extinct.
By Rachel Weiner / September 28, 2008

Soon after Sarah Palin was elected mayor of the foothill town of Wasilla, Alaska, she startled a local music teacher by insisting in casual conversation that men and dinosaurs coexisted on an Earth created 6,000 years ago — about 65 million years after scientists say most dinosaurs became extinct — the teacher said.

After conducting a college band and watching Palin deliver a commencement address to a small group of home-schooled students in June 1997, Wasilla resident Philip Munger said, he asked the young mayor about her religious beliefs.

Palin told him that “dinosaurs and humans walked the Earth at the same time,” Munger said. When he asked her about prehistoric fossils and tracks dating back millions of years, Palin said “she had seen pictures of human footprints inside the tracks,” recalled Munger, who teaches music at the University of Alaska in Anchorage and has regularly criticized Palin in recent years on his liberal political blog, called Progressive Alaska.

The idea of a “young Earth” — that God created the Earth about 6,000 years ago, and dinosaurs and humans coexisted early on — is a popular strain of creationism.

Though in her race for governor she called for faith-based “intelligent design” to be taught along with evolution in Alaska’s schools, Gov. Palin has not sought to require it, state educators say.

In a widely-circulated interview, Matt Damon said of Palin, “I need to know if she really thinks that dinosaurs were here 4000 years ago. I want to know that, I really do. Because she’s gonna have the nuclear codes.”