Sarito Carol Neiman : Healthcare on the Ground II: The Angels 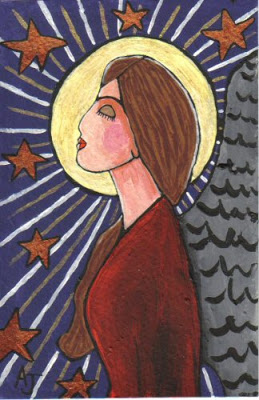 The angels are the ones who are doing more than just their jobs.

[Shredding the Envelope (“Ruminations on news, taboos, and space beyond time”) is Sarito Carol Neiman’s (occasionally) regular column for The Rag Blog. This is the second in a series. Read Part I here.]

My brother called them “angels” in his email dispatches from the surgery waiting room. By this, I know now that he meant the ones who look you in the eye, who respond to your questions directly and without evasion. Without hollow boilerplate responses, meant to reassure those anxiously awaiting some news or a verdict that nobody yet has.

The angels are the ones who are doing more than just their jobs.

Being a guy, and more specifically a guy who loves understanding the workings of things, my brother was also impressed by the airport-like, huge computer display on the wall of the waiting room that showed which operating room was occupied by which surgeon, how much longer it was expected to be in use… it functioned as a reassurance in itself, like the clock displays on the crosstown Manhattan L line that tell you how many minutes away a train is from where you’re standing.

He and my sister… and whoever else might have been there from the family (who will no doubt forgive me for not remembering just now)… could watch, as the slot representing Dad kept getting extended. From the initial four to a total of seven hours, by the time it was all said and done.

Scott & White has a reputation for being one of the best in Texas. High-tech, computerized in all its dimensions, there is a mini-version of air traffic control opposite each nursing station, where selected vital signs of each patient in each room are on live display, broadcast from a little monitor each of them wears (or not, as needed, I assume) in a pocket sewn into their gowns, with its wires and sensors silently attached to their bodies and capturing heartbeat, respirations, temperature. When a nurse comes into the room, tasks completed and supplementary notes are entered via keyboard and screen attached to the wall next to the door, not on the iconic hospital “clipboard.”

All very reassuring, even laudable. But for the patients themselves, and their families, it’s the angels who count.

I have met many, so far, in the course of this journey. I’d say the majority of them have been “new”… interns, nurses in training, residents. (Maybe “the system” tends to beat angelhood out of people who are in it too long. I sense I should camouflage their names to protect their innocence.)

R, whose extraordinary sensitivity and respect toward Dad, on what had started as a really difficult day, seemed to help him tap into a new reservoir of strength within himself to turn things around by the end of the day.

B, whose eagerness to learn and clear enthusiasm for finding out what was broken and fixing it was so infectious, it earned him immediate forgivenesss for stepping on Dad’s toe the first time he approached his chair. When he came in the next day, clearly with an “assignment” to ask the patient a couple of questions, I saw B’s future as a great among angels reflected in my Dad’s honest, simple responses.

Dad is generally the sort of guy who will say “I’m fine” while bleeding to death from a gunshot wound. He’s also very perceptive. If he figures you don’t REALLY want to know, he will say, “I’m fine.”

B stood exactly in front of Dad, looked him in the eye, and said:

B: “Do you have any questions at all about your treatment that haven’t been answered?”

B: [Clear, simple response to describe Dad’s condition, and the surgery he had just undergone, and why. A nod from Dad. Understood, at last, beyond whatever descriptions he had been given, and had only abstractly/theoretically comprehended, before he went under the knife.] “Is there anything else you want to know?”

Dad: “Why am I not getting better?”

To which B responded that it takes time, it had been a huge ordeal, and actually Dad was doing remarkably well under the circumstances, better even than might be expected. Other people had said the same words, but B really knew those words were true. For the first time, Dad had been told the reality as certainly as it could be known, by a person so transparently honest and sincere that he could take a deep breath and move on to crossing the next river.

There are angels among the oldtimers, as well. Notably “Ida sweet as apple cidah” as Dad introduced her to me (referencing an old song he knows), an ageless woman with a huge presence that just lights up the room when she walks in. I don’t feel the need to protect her innocence, because her face tells you she’s seen it all – and I’m pretty sure the gods of the nursing angels have her under their fiercest protection, or she wouldn’t still be around. Just as she has all “her” patients under her protection, to the extent she’s able.

Or T, who hasn’t yet seen it all but has seen a lot for someone as young as she is, and who doesn’t have such a big sunny presence as Ida but is more the silent and subtle breeze who comes and goes without creating a disturbance, and whose eye never misses the smallest detail of expression on a face indicating that something might be amiss. She catches things even before they happen, an invaluable gift.

Most angels seem to live toward the middle of the healthcare food chain – they are the nurses, or the interns and residents who haven’t yet been professionalized into wearing the straightjacket of “lawsuit aversion” so many doctors seem to have around them, like an invisible shield against genuine human contact.

On the bottom of the food chain are those who are just passing through a minimum-wage job until they can find something better. There are notable, and wonderful exceptions to the “check it off the list” insensitivity of many aides in the modern, large-hospital system. Those exceptions, in my experience of them, are very special angels indeed. Just really, really good folks who love taking care of people and their environments, and making both the person and the environment as comfortable as possible. We should pay them what they deserve, so they can keep doing that priceless work without having to take a second job to support their families.

I feel a third part to this series coming on. And that is to take a look at what are the “anti-angel” forces at work in the system. What they are made of, both on a “systemic” and a human level. It’s going to need a bit of research on the system level (nothing fancy) and maybe a bit more distance on the human level than I can manage right now.

Right now, I need to get back to my Dad’s room in the hospital, and make sure he has something to eat that he enjoys for “dinner” (in real life outside the hospital, dinner for my Dad is usually a light snack. Hospital “nutrition departments” don’t operate in that mode.) And that he’s settled in comfortably for the night.

2 Responses to Sarito Carol Neiman : Healthcare on the Ground II: The Angels