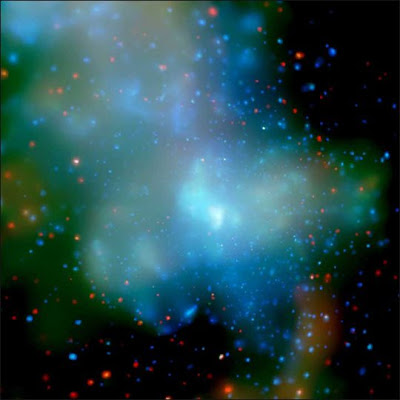 This image was produced by combining a dozen NASA Chandra X-ray Observatory observations made of a 130 light-year region in the center of the Milky Way. When microwaves created by the Big Bang pass through large galaxies, they appear to pick up energy. The reason, say astronomers, is dark energy. Photo courtesy of NASA.
‘May be the clearest detection of dark energy to date’
By Irene Klotz / August 5, 2008

Scientists don’t know much about the mysterious phenomenon known as dark energy, but they do have a picture of what it’s doing to the universe, namely, driving it apart.

In what may be the clearest detection of dark energy to date, astronomers at the University of Hawaii looked at microwaves left over from the beginning of the universe some 13.7 billion years ago. The scientists grouped the rays depending on whether they had passed through massive clusters of galaxies or bee-lined to Earthly detectors through areas largely lacking galactic real estate.

The premise was that these “background” microwaves would pick up a little energy as they entered the clusters, urged on by the forces of gravity. But if gravity had a monopoly on the game, the rays would lose that snap as they pressed through the other side, rendering the energy gain a transitory phenomenon.

So how to explain that the microwaves passing through super-sized galaxy clusters got to keep a bit of unearned gain?

István Szapudi and colleagues believe it is because dark energy, which sometimes is referred to as anti-gravity or vacuum energy, had spread out the galaxy clusters, as it is doing to all space. By the time the microwaves exited, there was proportionally a bit less mass to deal with, leaving the rays with a slight energy advantage.

“It’s kind of like if you have a car on a hill,” explained Gary Hinshaw of NASA’s Goddard Space Flight Center in Greenbelt, Md. “You pick up energy as you’re going down, but you give it all back up again when you go up.

“What is happening here,” he added, “is that the acceleration of the universe is forcing the gravity wells to be less strong…so over the time it takes for energy to cross the cluster, the strength of the cluster has diminished.”

The measurements are difficult to make because tiny variations in the Big Bang remnant waves are larger than the observable effects of intervening galaxy clusters and voids. But by grouping together data from background radiation maps of the 50 largest galaxy clusters and the 50 largest voids, researchers were able to come up with a finding they say has only a one in 200,000 chance of being a statistical fluke.

The data was taken from Sloan Digital Sky Survey, which has mapped the distribution of galaxies in about 25 percent of the sky.

Previous dark energy studies have a one in 20 chance of being statistically coincidental, Szapudi said.

Dark energy was discovered about 10 years ago and is considered the leading outstanding puzzle in cosmology today.

Szapudi’s research will be published in an upcoming issue of The Astrophysical Journal.

This entry was posted in RagBlog and tagged Astronomy, Dark Matter, NASA, Science, The Universe. Bookmark the permalink.