SCIENCE / Next Generation Lighting on the Horizon

OLED light sources. The devices are flat – another reason they are desirable as light sources.
Flat-screen light bulbs switch on
By Jason Palmer / May 15, 2009

The result brings closer the prospect that OLEDs will be the flat-screen light sources of choice in the future.

The limited lifetime of the blue-emitting part of the devices means they survive for just hours, but new blue-emitting materials are on the horizon.

The results are published in the journal Nature.

There has been significant work in OLEDs in recent years, so that small displays and even televisions based on the technology are beginning to come to market.

Though much of the technology would be the same for lighting, the key word for light bulbs is efficiency – and OLEDs had not, until now, passed the efficiency benchmark set by fluorescent bulbs.

Two different types of organic polymers can be used in the devices: phosphorescent and fluorescent.

While fluorescent materials – the kind used in OLED displays and televisions – are significantly longer-lived, they are only one-fourth as efficient.

Recent research has therefore focused on optimising the efficiency and lifetime of devices based on phosphorescent materials.

“I think if you went back five or 10 years and said this is where we’re going to end up, there would’ve been all-round scepticism.” John de Mello, Imperial College London

Now, Karl Leo of the Institute for Applied Photophysics in Dresden and his colleagues have made the first devices to outperform fluorescent bulbs in the efficiency stakes.

To do that they had to reduce the sources of loss – stages in which electrical energy goes in but does not exit in the form of usable light.

They did this first by optimising the design in the emitter layer, where losses happen because charge carriers recombine rather than dumping their energy into the polymers that give rise to coloured light.

Another significant source of loss happens at the edge of the diode structure where the light is actually produced; if it is not extracted efficiently, photons can bounce around inside it or be re-absorbed.

The team solved that problem by designing a particularly efficient, nano-structured interface to suck out more light than previous efforts.

“The combined result is that we achieve an efficiency which is for the first time higher than a fluorescent tube,” Professor Leo told BBC News.

Also, unlike previous white OLEDs, that efficiency does not decrease as the devices are turned up to produce higher-intensity light.

Very much like prior white OLEDs, however, the significant problem is that the devices degrade within an hour or two, because the polymers that produce the blue part of the light are unstable.

“I’m personally convinced that it may take a few years, but chemists will solve this problem and find materials which are stable enough,” he said. 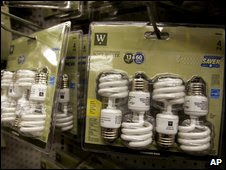 “I think if you went back five or 10 years and said this is where we’re going to end up, there would’ve been all-round scepticism,” he said.

“But they’ve shown that by taking existing materials and known methods, tweaking them a little bit, and addressing several issues in parallel you really can bring efficiencies up to parity with fluorescent tube lighting.”

Professor Leo suggested that by further improving the design of the part of the OLEDs that whisks the light out, efficiencies up to twice that of fluorescent bulbs could be reached.

For the moment, the devices are comparatively expensive because of the manufacturing methods the group employs.

But OLEDs, when the materials and designs are right, can be produced in so-called “roll-to-roll” manufacturing in which vast sheets are made, making them economical on a commercial scale.

“Commercially this is really an opportunity,” said Professor Leo.

“I’m pretty convinced that in a few years OLEDs will be a standard in buildings.”

This entry was posted in RagBlog and tagged Green Technology, Science. Bookmark the permalink.

1 Response to SCIENCE / Next Generation Lighting on the Horizon