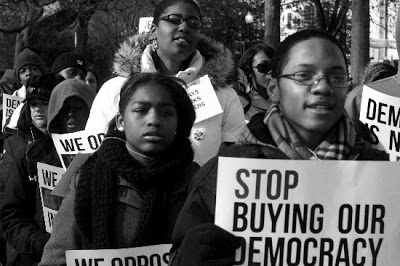 Rallies throughout the country are designed to pick up the mantle of Dr. Martin Luther King, Jr.’s dream.

In 16 cities around the country, ministers from African-American churches offered a unified set of demands as they served notice that they are joining the Occupy movement. The demonstrations took place at Federal Reserve banks because, as the organizers explained, it was the Fed that bailed out the banks and Wall Street while Main Street was left to suffer.

In Washington, D.C., the Reverend Jamal Bryant of the Empowerment Temple AME Church in Baltimore spelled out the demands in front of the Federal Reserve headquarters.

The first demand is campaign finance reform. Rev. Bryant said elections should not be about who can raise the most money, and for any reform to come out of Washington money has to be removed from the equation.

The second demand is to expand Pell Grants so our youth will no longer be burdened by debt from student loans. Rev. Bryant said, “It is a travesty that there is more student loan debt in this country than there is credit card debt. There are more students struggling to pay their debt than people paying off their flat screen TVs.”

Occupy the Dream’s third demand is an immediate moratorium on foreclosures. Rev. Bryant said current estimates are that four million families will lose their homes between now and April. The demand is for foreclosures to halt until a plan is put in place to assist the victims of predatory lending.

The fourth demand is for Congress to allocate $100 billion to put people back to work. They are calling for the money to be allocated in three areas: job training, seed money for entrepreneurs, and money to rebuild our infrastructure.

Occupy the Dream Youth Coordinator Farajii Muhammad speaks in front of the Federal Reserve in Washington DC, January 16, 2012. Photo by Scott Galindez / RSN.
These rallies were designed to pick up the mantle of Dr. Martin Luther King Jr.’s dream. Many in Dr. King’s family believe that one of the reasons he was killed was that he was planning to occupy the National Mall until the Vietnam War ended. Rev. Bryant said this year, instead of “…resting and reflecting on the past, we are honoring Dr. King by making history, and beginning a new push to achieve his dream.”

Another focus of the Occupy the Dream movement will be to hit the banks where it will hurt. They are calling for everyone to move their money from the big banks to minority-owned or community banks and credit unions. February 14th will be the day of the initial push. They will then extend the effort to professionals in the African-American community — doctors, lawyers, and others. The third push will encourage churches to move their money. Rev. Bryant said the goal was to “Let the banks know that it’s our money and they need to treat us with respect.”

Occupy the Dream is also building a National Mobilization to Washington DC, which is scheduled for April 4-7.

1 Response to Scott Galindez : Black Churches to ‘Occupy the Dream’