SDS Olympia Fights Back Against the Police State 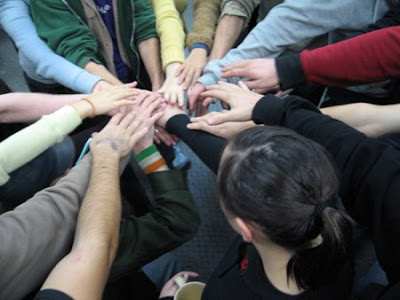 A police car was overturned during a ruckus with local and campus police following a hiphop concert by the group Dead Prez at Evergreen Sate College in Olympia WA. The Evergreen branch of Students for a Democratic Society (SDS) was suspended by the college administration from the campus. The suspension of SDS was a reaction to the organization’s refusal to go along with an edict from the administration banning public events at the college.

Evergreen College, commonly referred to as Evergreen, is a progressive college founded by a Republican governor of Washington in the early 1970s. It already has a legacy of activism that runs deeper and stronger than many other US colleges with much longer histories.

Filemón Bohmer-Tapia and Courtney Franz are students at Evergreen and members of SDS. Filemon is also involved in MEChA de Evergreen.and is a community organizer in the immigrant rights and anti-war movements. Courtney is a sophomore at Evergreen State College, where she is studying Political Economy, Social Sciences, and writing. I recently contacted them and asked a few questions regarding the situation at the college. They emphasized that they spoke as members of SDS, not for SDS.

Can you explain the series of events that led up to the suspension of Olympia SDS by the Evergreen State College administration? More to the point, what is your take on the so-called riot by some people that attended the concert by Dead Prez?

Filemon: First, I want to thank Dead Prez and Umi for coming out to Olympia and giving a great concert that promoted social justice and revolutionary change. They are welcome in Olympia anytime. There has been a lot of negative press surrounding the events at the Dead Prez concert. I think it’s important to clear up some of the distortions that have been promoted in the media.

In actuality, members of an unofficial security team, which had no visible identifiable labels, abused their power and started a fight in the crowd. Some fought back in self-defense and an African- American man, Kaylen Williams, attempted to break up the fight. After the scuffle was over members of the security team, uninjured and primarily white, ran to the police (and a couple of them) pointed out Mr. Williams, who was then immediately and unjustly arrested by an Evergreen State College police officer. As the officer was arresting him, members of the crowd and even other members of the security team told the officer that she had the wrong person and that he was only trying to break up the fight. The officer refused to listen and took Mr. Williams out of the concert in handcuffs. Many people began to question the officer’s decision and demanded that she release him. The officer refused and placed Mr. Williams in the back of the police car directly outside of the concert exit. As the concert ended, people began leaving the concert venue and saw that there was a black man under arrest and a growing number of people demanding his release. The police car was surrounded by this time and the crowd of about 300 was chanting “Let Him Go!”

The Olympia police then barged in swinging their clubs indiscriminately and dowsing the crowd with pepper spray. One Evergreen student landed in the Emergency room with internal bleeding. The crowd then began protecting themselves with any material available, throwing bottles, rocks, and sticks at the police. There was already a lot of bad blood between (much of) the Olympia community and the Olympia Police Department as a result of police brutality during the Port of Olympia protests when protesters tried to prevent military weapons and materials from being shipped to Iraq. The crowd was now very unified in the mission of freeing the prisoner and kicking the police off of our campus. The police were forced to release Kaylen Williams and had to retreat as the crowd grew in numbers and intensity. As the police escaped, they left one of their patrol cars behind, and the people took out their frustration on it.

Whether or not people agree with the destruction of the police car, it is important to realize the context in which it happened. There was an unjust and what many would call a racist arrest, and police violence against a peaceful crowd before any there was any property damage. That night, the Olympia community stood in solidarity against the abuse of power that is synonymous with police behavior.

Courtney: Shortly after the “riot,” Evergreen President Les Purce and Vice President of Student Affairs Art Constantino met with representatives from the four jurisdictions of police who were directly involved (Evergreen State College Police, Thurston County Sherriff’s Department, Olympia Police Department, and Washington State Patrol). We learned from a reliable source that when the police asked them to point to likely suspects, the administrators told them to investigate students involved in the port protests, especially members of SDS.

Opinions within SDS vary on the specific tactics protesters used, but everyone understands their motivation; antiracism is in our mission statement. It is vital to remember that a group of students started a spontaneous uprising in response to police actions. It is ludicrous to imply, as the administration has, that SDS or any other student group planned or instigated these actions.

After the melee and subsequent sensationalist coverage of the event in the local media, the Evergreen College administration banned public events. What was their reasoning for this somewhat drastic reaction? What was the general opinion of students and staff to the ban?

Courtney: The Evergreen State College administration did not ban public events per se – they issued a (so-called) “moratorium on student-sponsored concerts and other events that involve substantial safety and security considerations until processes are improved” through a review committee. Students and the public found out about this through this press release and subsequent articles in (the local daily)The Olympian, the Cooper Point Journal (the campus newspaper), and other media. It was never an official written policy. There was substantial confusion about this among students. The administration either reserved the right to review events on a case-by-case basis, simply ignored other musical events following the concert (including one with over 300 attendees), or selectively applied these different standards.

The administration claimed, then, that the problem was safety procedures. From what I understand, some people on the safety review committee have tried to bring up the fundamentally unsafe police violence and racism that instigated the events. It appears that the committee has not yet come to a conclusion; a separate campus police review committee found no racism in the arrest. The attached report details their inadequate response.

Radical views have long been a target for the administration, but SDS knew that the situation would worsen after the concert. We had been planning the San Francisco 8 event and the subsequent performance for months. After the moratorium was announced, members of SDS approached the administration and were told that the event could continue. Shortly before the events were scheduled, the administration went back on its word and cancelled them. It claimed that because one of these two events involved music and both were advertised on the same flier, neither could continue. After much deliberation within our group and with the panelists and guests, we decided to hold the events anyway.

Filemon: The Evergreen administration’s reason for the ban on concerts, called the concert moratorium, was to prevent any future ‘violence’ at future events. Many students, staff, and faculty were outraged with this decision, made solely by the President, Vice President, and the Dean of Student Services. The Evergreen administration has been aggressively cooperative with local police in the investigation that has five people facing felony charges as a result of the events after the Dead Prez concert. Olympia SDS officially criticized both the police actions on the night of the Dead Prez event and the concert moratorium. The concert ban was never actually put into effect though, because the week after it was announced, a musical performance was held at Evergreen with the administration’s knowledge and without any interference.

When the members of the San Francisco 8 came to speak and were told about the ban, what was their response? I know that you all went ahead with the program and it was well attended. Can you give a summary of how the administration and campus police reacted that evening and in the immediate aftermath? Also, how many people are in Olympia SDS?

Courtney: Olympia Students for Democratic Society (SDS) meetings are usually attended by up to twenty-five people, and about fifty people total come attend some meetings. Hundreds of people have come to our events, cosponsored them, or helped us with our activism.

The San Francisco 8 panelists told us they were proud of us as young activists and expressed support for our resistance against police actions and racism as well as our work in defense of free speech. They largely agreed that the police were a fundamentally and systematically oppressive force.

Campus police monitored the events from outside the building and talked to a few people, but there was little direct interaction at the event itself; things appeared to be going fine. Shortly after the panel and performance, the administration sent us a letter notifying us of our suspension. We held an initial appeal, which was well attended by other students and student groups, and were informed that our suspension was shortened. We have filed a letter of intent to appeal a second and final time.

Filemon: (Regarding the banned event) SDS went ahead with promoting a panel discussion that had been planned for months with the San Francisco 8, former Black Panthers who had been tortured by U.S. Government agencies and were victims of the COINTELPRO campaign (now on trial for charges related to the murder of a police officer in 1971-charges that were thrown out in 1975 in part because confessions were extracted under police torture-Ron). We were also promoting an acoustic performance by David Rovics, Danny Kelly and Mark Eckert that would serve as a benefit for anti-war activist Carlos Arredondo, whose son was killed in Iraq. Two days before both separate events were to occur; the administration abruptly informed SDS that the two events were canceled, because “they were advertised as a concert.” The panel discussion was in no way a concert, and the second, separate event was an acoustic performance, hardly a concert. The decision was obviously politically motivated because there had already been another musical performance (as noted above) since the so-called concert moratorium had began. SDS and many other student groups deemed the cancellation illegitimate, and we decided to proceed with both events. Both the panel discussion with the San Francisco 8 and the later acoustic benefit performance by David Rovics ran smoothly and were very well attended. Both the San Francisco 8 and David Rovics have been very supportive of SDS and were appreciative that we went ahead with the scheduled events. The next week, the Evergreen Administration informed SDS that we were temporarily suspended until they could come to a decision. Eventually they decided to suspend SDS’s group status for an entire year.

Read all of it here. CounterPunch / The Rag Blog

This entry was posted in RagBlog and tagged Dissent, SDS. Bookmark the permalink.

1 Response to SDS Olympia Fights Back Against the Police State