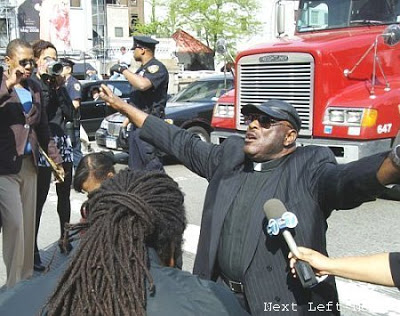 Civil Disobedience actions shut down the Brooklyn, Manhattan and Queensboro Bridges today during rush hour. The protests were called by Reverend Al Sharpton and his National Action Network as part of a campaign to force a Department of Justice investigation of the Sean Bell shooting case. The NYPD reported over 200 protesters were arrested, including Sean Bell’s widow, Nicole Paultre Bell, Sharpton, and shooting survivors Joseph Guzman and Trent Benefield. After his release from police custody Sharpton told reporters, “Today the Sean Bell Movement was born.” — Thomas Good.

NEW YORK — Local anti-war activists and citizens joined on the streets of New York City yesterday to condemn the ruling handed down by Justice Arthur Cooperman declaring the three police officers who killed Sean Bell and wounded Joseph Guzman and Trent Benefield innocent of any wrongdoing. Hundreds of people gathered at five locations around the City demanding justice for the death of Bell, and the Bell family.

On 60th Street and 3rd Avenue, just outside Bloomingdales, we gathered our forces starting at 3 PM and over the course of 40 minutes had a few hundred people chanting and marching outside the shopping doors. Signs counting the shots fired “1, 2, 3, 4, 5, 6….50″ were carried, as well as “WE ARE ALL SEAN BELL, THIS WHOLE DAMN SYSTEM IS GUILTY!” About 3:45 PM the crowd, surrounded by police, justice department officials, and some other people in unidentifiable uniforms, marched in the direction of 2nd Avenue. The police looked dumbfounded and asked where we were going. Once on 2nd Avenue, the street captain, Cynthia from Reverend Al Sharpton’s “National Action Network”, shouted for us to cross the street and circle in front of the 59th Street Bridge off ramp. 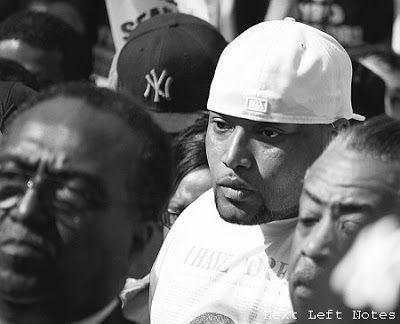 Joseph Guzman outside One Police Plaza, just before his arrest. Photo by Thomas Good / NLN.
Those of us who had already committed to participate in non-violent civil disobedience knelt down and held hands in front of oncoming traffic, joined by some others who peeled off after the second warning by the cops. Cynthia told us we were the smallest group that had gathered around the city, but we were determined to slow down traffic.

About 50 of us knelt there, tractor-trailers a few feet away from our faces. A line of cops stood between us and the trucks as we chanted, “Justice for Sean Bell!”, “No Peace, No Justice,” and “We are all Sean Bell.” We counted to 50, signifying the number of shots fired, and held our ground in the street. A Reverend with NAN prayed with us and asked that justice be served for the Bell family.

The Lieutenant in charge gave us the warnings to move, and it took about 15 minutes before he gave the order to arrest. In the meantime, oncoming traffic on the bridge was backing up into Queens, and horns were blowing wildly to get us to move. We kept shouting, and locked arms. From the traffic moving down 2nd Avenue we could hear lots of honks of approval and people yelling “justice!”

All in all we had the traffic stopped for about 30 minutes on the bridge. A small price to pay for commuters considering the horrific injustice in the massacre and shooting of Sean Bell, Joseph Guzman and Trent Benefield.

Once downtown, we were all herded into 1 Police Plaza, and it was party time! All of us there, many first time arrests, met each other, exchanged phone numbers, sang, laughed and were pleased that we could participate.

This was a historic day. It was the first major collaborative civil disobedience action joining the anti-war movement, civil rights activists and war veterans. The last time this happened was 40 years ago to the month, and our action had the feel of the seeds of revolutionary change.

People from every walk of life participated; women and men in suits just coming from work; young students whose backgrounds were ranging from Muslim, Jewish, Greek, and Latino; The New York Grannies; segments of different anti-war groups such as the War Resisters League, Hunter College SDS, World Can’t Wait and Activist Response Team (A.R.T.), even shoppers left stores and grabbed signs to walk with us.

Keep watching for more actions, who knows, there’s something happening and it’s good!