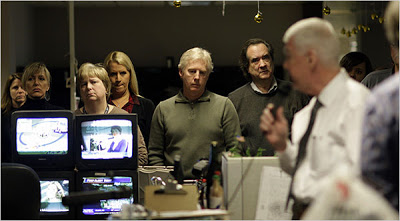 SEATTLE — The Seattle Post-Intelligencer will produce its last printed edition on Tuesday and become an Internet-only news source, the Hearst Corporation said on Monday, making it by far the largest American newspaper to take that leap.

But The P-I, as it is called, will resemble a local Huffington Post more than a traditional newspaper, with a news staff of about 20 people rather than the 165 it had, and a site with mostly commentary, advice and links to other news sites, along with some original reporting.

Other newspapers have closed and many more are threatened. But the transition to an all-digital product for The P-I will be especially closely watched in an industry that is fast losing revenue and is casting around for a new economic model.

For one thing, the closing may end up putting greater pressure on the surviving and financially struggling Seattle Times, because of the end of a joint operating agreement between the two papers. It may even bring closer the day when Seattle has no local paper at all.

And the way The P-I is changing might hint at a path for future newspaper closings. To some extent, in shifting its business model, it will enter a new realm of competition. It will compete not just with the print-and-ink Times, but also with an established local news Web site, Crosscut.com, a much smaller nonprofit organization that focuses on the Northwest. The move shows how some newspapers, in the future, may not vanish but move the battle from print to the digital arena.

“The bloodline will live on,” Roger Oglesby, the paper’s publisher and editor, told the employees Monday morning in the newsroom. The Web site will remain at the paper’s address, SeattlePI.com, and assume its new form on Tuesday.

Under the decades-old joint operating agreement, The Times handled all non-newsroom operations for both, like printing, delivery, advertising and marketing. Hearst executives said they were dissolving that agreement, but it was not clear how that would affect the money-losing Times. It will no longer have to share revenue with Hearst, but it will also be unable to share expenses — the same situation The Denver Post found itself in after its rival, The Rocky Mountain News, folded late last month.

For their part, Times executives said that the end of The P-I was a short-term challenge, but a potential lifeline in the long run. “Had Hearst not made this decision, the survival of The Times was unlikely,” said Jill Mackie, vice president for public affairs at The Times.

The new P-I site has recruited some current and former government officials, including a former mayor, a former police chief and the current head of Seattle schools, to write columns, and it will repackage some material from Hearst’s large stable of magazines. It will keep some of the paper’s popular columnists and bloggers and the large number of unpaid local bloggers whose work appears on the site.

Among those survivors is Monica Guzman, 26, who writes The Big Blog, which she describes as tapping into “the conversation about news in Seattle, whatever stories are getting buzz, whatever people seem to be most interested in talking about.”

Sitting at her desk surrounded by departing reporters who packed boxes quietly or sipped whiskey, Ms. Guzman said it was “more than this hunk of paper” that she would miss, but her colleagues and their encyclopedic knowledge and instincts. “To go on without some of that, it’s a little scary,” she said.

The P-I lost $14 million in 2008. Hearst announced in January that if it could not find a buyer, it would cease printing. Few people expected a buyer to emerge.

Hearst hopes to capitalize on the healthy Web traffic The P-I already has, about 1.8 million unique visitors a month, according to Nielsen Online. It usually outranks the online readership of The Times, despite much smaller print circulation, 118,000 on weekdays last year, compared with 199,000 for The Times.

“We clearly believe we are in a period of innovation and experimentation, and that’s what this new SeattlePI.com represents,” said Steven R. Swartz, president of Hearst’s newspaper division. “We think we’ll learn a lot, and we think the Seattle market, being so digitally focused, is a great place to try this.”

The new P-I will be led by Michelle Nicolosi, executive producer of the site since 2005, who has been an editor and prize-winning reporter. David McCumber, the managing editor, and Mr. Oglesby will not stay with The P-I, but will remain with Hearst in some capacity, executives said.

Hearst said it would offer severance packages to about 145 employees. Because the newspaper has had no business staff of its own, the new operation plans to hire more than 20 people in areas like ad sales.

David Brewster, the publisher of Crosscut, praised Hearst for “creating new journalism,” rather than completely shutting down The P-I. “There’s definitely room,” he said. “Seattle will be quite a vital place.”

Ruth Teichroeb, an investigative reporter who was among those who lost their jobs, said she worried about what would be lost. “The thing that’s always been closest to my heart is The P-I’s coverage of the underdog, people who are invisible,” she said. “Those people who have the least voice in society are losing access to another part of the mainstream media.”

This entry was posted in RagBlog and tagged Bankruptcy, Internet, Journalism, Mainstream Media. Bookmark the permalink.