See the Superhero Inside Yourself 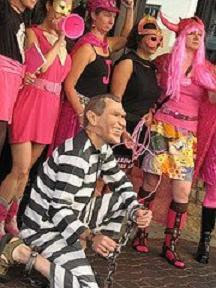 Early Saturday morning, 19 July 2008,five super sheroes and a shackled Bush in striped prison garb gathered outside a restaurant in Austin, Texas and put together a loose strategy of street theater and flyering at the Netroots Nation conference down the street. We strode in confidently and gave flyers to the largely sympathetic crowd waiting to be allowed into the auditorium where Speaker of the House Nancy Pelosi was to speak.

Security was not as tight as we had feared. We strode around easily and quickly exhausted our supply of flyers. We did a little theater chasing Bush the war criminal around the lobby. Then the organizers took us aside to be assured we wouldn’t disrupt things once inside. Not realizing that not all of us had passes, this gave us a de facto invitation to enter the hall and when the doors opened, we did. We strode through the crowd shouting slogans such as “Our powers are your powers. Use them.” In response one woman said to me sarcastically, “What do you think we’re going to do, sit quietly by?” Well, indeed, and really to my surprise, that is what I saw unfold.

The control of dissent was masterfully orchestrated, really. First, all questions were taken through a website where anyone could post a question. On the days leading up to the talk, users voted on the “best” question. The NetRoots moderators then would ask these hard-hitting questions. So far so good, right? Well, in theory, yes. Some of the authors of the chosen questions were even there to ask them in person. However, there was no follow up question, and, certainly, no interrupting the prestigious Speaker who, in response to a question about FCC regulations, I think it was, took us back to the days of Lewis and Clark! No one called her on the carpet for evading the questions. People clapped when she referred to change coming in 107 days. She’s been Speaker for two years, people! I really wanted to shout, to rant…at the liberal –or are they supposed to be left of liberal? – bloggers in the audience. Then, and here comes the coup de grace, the rumored secret guest makes his entrance: none-other-than Al Gore. Phew! Pelosi is off the hook. No more questions. Gore has a prepared speech and gets 3 of the 4 allowed and controlled questions after it. (Though there were apparently more after we left.) 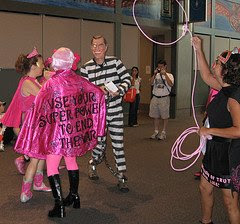 Through most of the proceedings we Sheroes, with Bush in tow, stood silently at the back aisle in the auditorium. We held peace signs aloft and some strolled around the room, keeping security on their toes. As Pelosi began on the last question – though, again, she not-so-deftly avoided answering it – we began to stroll through the hall and began shouting for the bloggers to make her be accountable and call her on her lies. Then, we walked on out, security trailing after.

It is actions like these and more confrontational ones that bring questions from within the movement as well as from others of “Why be disrespectful?” “Why disrupt?” “Aren’t we just alienating people who would otherwise be our friends?” I have contemplated the effectiveness of our actions frequently and Cintra Wilson recently wrote a piece about Code Pink tactics which was posted on Salon.com. My experience at NetRoots convinced me of the need for the actions and here’s why.

Many of the conference attendees gave us the thumbs up as they passed us. One woman early in Pelosi’s talk urged us to “Make some noise…” though making every effort to be indiscrete herself. As I later read the bloggers’ chats taking place during the event on the Daily Kos and Netroots Nation sites I was amazed to see how many were as disgusted with her responses as we were and there were some comments about wishing we would do something and they were glad we were there. You certainly wouldn’t know it standing in the hall, watching the respectful silence as she droned on, and enthusiastic applause as she spouted liberal truisms as well as lies. Here’s the thing, it was their conference! This was a largely sympathetic crowd and we were mindful of not alienating our allies. This was their conference to disrupt. It was their job as independent media to demand real and thoughtful answers of Pelosi and not demagoguery. And to expect the organizers to focus less on control and more on facilitating true dialogue.

I think of our work this way: according to the diffusion of innovations theory and Malcolm Gladwell’s the Tipping Point, (please forgive my gross simplification here) you have to have a critical mass of adopters of a thought or behavior before mainstream acceptance of it. Do some of our allies cringe at CodePink tactics? Sure, but, believe me, Pelosi isn’t refusing to initiate the impeachment process just to spite Code Pink. By being among the many groups that keep antiwar sentiment in the news, CP provides pressure on public opinion towards

• ending the war,
• bringing the troops home,
• impeachment, and, goddess forgive,
• keeping our troops and Israel’s bombs out of Iran.

If the anti-war movement were purely a fringe movement, we could be said to be ineffective, but “fringe” tactics on an issue that at least two-thirds of Americans support keeps the ideas out there and encourages people to use more mainstream strategies such as letter-writing, signing a petition, calling a representative or making a donation to a citizen lobbying organization, for example. That is, perhaps people will make the same point in the best way they know how and feel comfortable.

Perhaps this morning, in this we failed: Our signs should have/could have been more specific if they couldn’t hear our words. So, if you were there and didn’t get it, and I’m not being facetious here:

We are the Code Pink Super Sheroes. Our powers are: Truth, Justice, Peace, Reason, Observation, Organizing, Love and more. And these, indeed, are everyone’s powers. We want everyone to see the superhero inside them and use their powers.

You can do it in costume if you want or from your computer as many of the NetRoots Nation attendees do, but don’t rag on us for calling for accountability among our elected officials and the media, including independent media. If you wanted Pelosi to be accountable and answer the questions and know that you wanted a real answer, you could have stood with us. Can you imagine the effect if even a third of the room had gotten up and stood silently with us? Blogging is great and necessary, an important tool in the political discourse, but it is not enough, just as putting on a pink dress and gold mask isn’t going to change the world today. It takes both of us and all of us and action beyond these.

Okay, now I’ve done what you do (though it’s taken me much longer than you no doubt), maybe you can do a little of what I do toward the same end. You don’t have to wear a tiara when you do, but you might have more fun if you do!

[Disclaimer: These opinions are mine and I don’t speak for Code Pink.]

This entry was posted in Rag Bloggers and tagged Netroots Nation, Peace Movement. Bookmark the permalink.