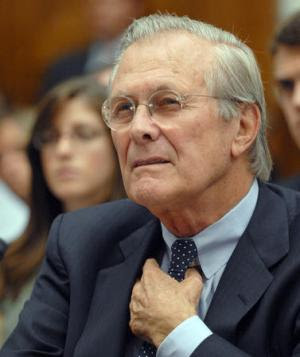 Rummy the Impaler. Photo by Roger L. Wollenberg / UPI
Senate places blame on Rumsfeld:
‘The abuse of detainees in U.S. custody cannot simply be attributed to the actions of “a few bad apples” acting on their own.’
By Joby Warrick / December 11, 2008

WASHINGTON – A bipartisan Senate report released today says that former Defense Secretary Donald Rumsfeld and other top Bush administration officials are directly responsible for abuses of detainees at Guantanamo Bay, Cuba, and charges that decisions by those officials led to serious offenses against prisoners in Iraq and elsewhere.

The Senate Armed Services Committee report accuses Rumsfeld and his deputies of being the principal architects of the plan to use harsh interrogation techniques on captured fighters and terrorism suspects, rejecting the Bush administration’s contention that the policies originated lower down the command chain.

“The abuse of detainees in U.S. custody cannot simply be attributed to the actions of ‘a few bad apples’ acting on their own,” the panel concludes. “The fact is that senior officials in the United States government solicited information on how to use aggressive techniques, redefined the law to create the appearance of their legality, and authorized their use against detainees.”

The report, released by Sens. Carl Levin, D-Mich., and John McCain, R-Ariz., and based on a nearly two-year investigation, said that both the policies and resulting controversies tarnished the reputation of the United States and undermined national security. “Those efforts damaged our ability to collect accurate intelligence that could save lives, strengthened the hand of our enemies, and compromised our moral authority,” it said.

The panel’s investigation focused on the Defense Department’s use of controversial interrogation practices, including forced nudity, painful stress positions, sleep deprivation, extreme temperatures and use of dogs. The practices, some of which had already been adopted by the CIA at its secret prisons, were adapted for interrogations at Guantanamo Bay and later migrated to U.S. detention camps in Afghanistan and Iraq, including the infamous Abu Ghraib prison.

“The Committee’s report details the inexcusable link between abusive interrogation techniques used by our enemies who ignored the Geneva Conventions and interrogation policy for detainees in U.S. custody,” McCain, himself a former prisoner of war in Vietnam, said in a statement. “These policies are wrong and must never be repeated.”

White House officials have maintained the measures were approved in response to demands from field officers who complained that traditional interrogation methods weren’t working on some of the more hardened captives. But Senate investigators, relying on documents and hours of hearing testimony, arrived at a different conclusion.

The true genesis of the decision to use coercive techniques, the report said, was a memo signed by President Bush on Feb. 7, 2002, declaring that the Geneva Convention’s standards for humane treatment did not apply to captured al-Qaida and Taliban fighters. As early as that spring, the panel said, top administration officials, including National Security Adviser Condoleezza Rice, participated in meetings in which the use of coercive measures was discussed. The panel drew on a written statement by Rice, released earlier this year, to support that conclusion.

In July 2002, Rumseld’s senior staff began compiling information about techniques used in military survival schools to simulate conditions that U.S. airmen might face if captured by an enemy that did not follow the Geneva conditions. Those techniques – borrowed from a training program known as Survival, Evasion, Resistance and Escape, or SERE – included waterboarding, or simulated drowning, and were loosely based on methods adopted by Chinese communists to coerce propaganda confessions from captured U.S. soldiers during the Korean war.

The SERE program became the template for interrogation methods that were ultimately approved by Rumsfeld himself, the report says. In the field, U.S. military interrogators used the techniques with little oversight and frequently abusive results, the panel found.

“It is particularly troubling that senior officials approved the use of interrogation techniques that were originally designed to simulate abusive tactics used by our enemies against our own soldiersand that were modeled, in part, on tactics used by the Communist Chinese to elicit false confessions from U.S. military personnel,” the report said.

Defenders of the techniques have argued that such measures were justified because of al-Qaida’s demonstrated disregard for human life. But the panel members cited the views of Gen. David Petraeus, now the head of U.S. Central Command, who in a May, 2007 letter to his troops said humane treatment of prisoners allows Americans to occupy the moral high ground.

“Our values and the laws governing warfare teach us to respect human dignity, maintain our integrity, and do what is right,” wrote Petraeus, who at the time was the top U.S. commander in Iraq. “Adherence to our values distinguishes us from our enemy.”

This entry was posted in RagBlog and tagged Bush Administration, Congress, Department of Defense, Guantanamo, Rumsfeld, Torture, War on Terror. Bookmark the permalink.