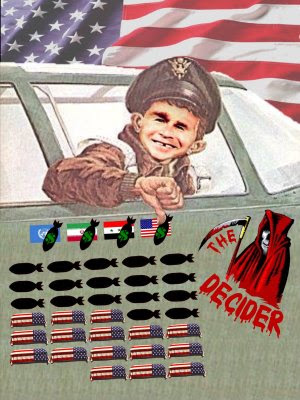 NEW YORK — The George W Bush administration plans to launch an air strike against Iran within the next two months, an informed source tells Asia Times Online, echoing other reports that have surfaced in the media in the United States recently.

Two key US senators briefed on the attack planned to go public with their opposition to the move, according to the source, but their projected New York Times op-ed piece has yet to appear

The source, a retired US career diplomat and former assistant secretary of state still active in the foreign affairs community, speaking anonymously, said last week that the US plans an air strike against the Iranian Revolutionary Guards Corps (IRGC). The air strike would target the headquarters of the IRGC’s elite Quds force. With an estimated strength of up to 90,000 fighters, the Quds’ stated mission is to spread Iran’s revolution of 1979 throughout the region.

Targets could include IRGC garrisons in southern and southwestern Iran, near the border with Iraq. US officials have repeatedly claimed Iran is aiding Iraqi insurgents. In January 2007, US forces raided the Iranian consulate general in Erbil, Iraq, arresting five staff members, including two Iranian diplomats it held until November. Last September, the US Senate approved a resolution by a vote of 76-22 urging President George W Bush to declare the IRGC a terrorist organization. Following this non-binding “sense of the senate” resolution, the White House declared sanctions against the Quds Force as a terrorist group in October. The Bush administration has also accused Iran of pursuing a nuclear weapons program, though most intelligence analysts say the program has been abandoned.

An attack on Iraq would fit the Bush administration’s declared policy on Iraq. Administration officials questioned directly about military action against Iran routinely assert that “all options remain on the table”.

The US and Iran have a long and troubled history, even without the proposed air strike. US and British intelligence were behind attempts to unseat prime minister Mohammed Mossadeq, who nationalized Britain’s Anglo-Iranian Petroleum Company, and returned Shah Mohammad Reza Pahlavi to power in 1953. President Jimmy Carter’s pressure on the Shah to improve his dismal human-rights record and loosen political control helped the 1979 Islamic revolution unseat the Shah.

But the new government under Ayatollah Ruhollah Khomeini condemned the US as “the Great Satan” for its decades of support for the Shah and its reluctant admission into the US of the fallen monarch for cancer treatment. Students occupied the US Embassy in Teheran, holding 52 diplomats hostage for 444 days. Eight American commandos died in a failed rescue mission in 1980. The US broke diplomatic relations with Iran during the hostage holding and has yet to restore them. Iranian President Mahmud Ahmadinejad’s rhetoric often sounds lifted from the Khomeini era.

The source said the White House views the proposed air strike as a limited action to punish Iran for its involvement in Iraq. The source, an ambassador during the administration of president H W Bush, did not provide details on the types of weapons to be used in the attack, nor on the precise stage of planning at this time. It is not known whether the White House has already consulted with allies about the air strike, or if it plans to do so.

Sense in the Senate

Details provided by the administration raised alarm bells on Capitol Hill, the source said. After receiving secret briefings on the planned air strike, Senator Diane Feinstein, Democrat of California, and Senator Richard Lugar, Republican of Indiana, said they would write a New York Times op-ed piece “within days”, the source said last week, to express their opposition. Feinstein is a member of the Senate Intelligence Committee and Lugar is the ranking Republican on the Foreign Relations Committee.

Senate offices were closed for the US Memorial Day holiday, so Feinstein and Lugar were not available for comment.

Given their obligations to uphold the secrecy of classified information, it is unlikely the senators would reveal the Bush administration’s plan or their knowledge of it. However, going public on the issue, even without specifics, would likely create a public groundswell of criticism that could induce the Bush administration reconsider its plan.

The proposed air strike on Iran would have huge implications for geopolitics and for the ongoing US presidential campaign. The biggest question, of course, is how would Iran respond?

Iran could flex its muscles in any number of ways. It could step up support for insurgents in Iraq and for its allies throughout the Middle East. Iran aids both Hezbollah in Lebanon and Hamas in Israel’s Occupied Territories. It is also widely suspected of assisting Taliban rebels in Afghanistan.

Iran could also choose direct confrontation with the US in Iraq and/or Afghanistan, with which Iran shares a long, porous border. Iran has a fighting force of more than 500,000. Iran is also believed to have missiles capable of reaching US allies in the Gulf region.

Iran could also declare a complete or selective oil embargo on US allies. Iran is the second-largest oil exporter in the Organization of Petroleum Exporting Countries and fourth-largest overall. About 70% of its oil exports go to Asia. The US has barred oil imports from Iran since 1995 and restricts US companies from investing there.

China is Iran’s biggest customer for oil, and Iran buys weapons from China. Trade between the two countries hit US$20 billion last year and continues to expand. China’s reaction to an attack on Iran is also a troubling unknown for the US.

Three for the money

The Islamic world could also react strongly against a US attack against a third predominantly Muslim nation. Pakistan, which also shares a border with Iran, could face additional pressure from Islamic parties to end its cooperation with the US to fight al-Qaeda and hunt for Osama bin Laden. Turkey, another key ally, could be pushed further off its secular base. American companies, diplomatic installations and other US interests could face retaliation from governments or mobs in Muslim-majority states from Indonesia to Morocco.

A US air strike on Iran would have seismic impact on the presidential race at home, but it’s difficult to determine where the pieces would fall.

At first glance, a military attack against Iran would seem to favor McCain. The Arizona senator says the US is locked in battle across the globe with radical Islamic extremists, and he believes Iran is one of biggest instigators and supporters of the extremist tide. A strike on Iran could rally American voters to back the war effort and vote for McCain.

On the other hand, an air strike on Iran could heighten public disenchantment with Bush administration policy in the Middle East, leading to support for the Democratic candidate, whoever it is.

But an air strike will provoke reactions far beyond US voting booths. That would explain why two veteran senators, one Republican and one Democrat, were reportedly so horrified at the prospect.

Former broadcast news producer Muhammad Cohen told America’s story to the world as a US diplomat and is author of Hong Kong On Air (www.hongkongonair.com), a novel set during the 1997 handover about television news, love, betrayal, high finance and cheap lingerie.