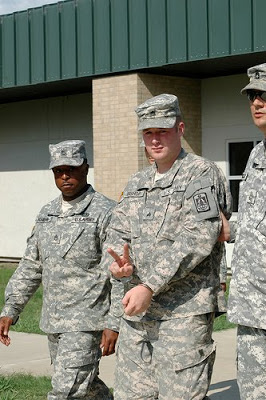 War resister Sgt. Travis Bishop flashes peace sign to supporters as he is taken to the Bell County (Texas) Correctional Unit after being sentenced to one year in prison at court martial on August 14, 2009. Photo by Eric Thompson.
Afghanistan War refuser:
Ft. Hood’s Travis Bishop gets reduced sentence

Sgt. Travis Bishop has learned that the 12-month sentence he is serving at Fort Lewis will be reduced by three months. Sgt. Bishop was sentenced at Fort Hood near Killeen, Texas, in August 2009 for refusing orders to deploy to Afghanistan.

Sgt. Bishop, a Kentucky native and country singer, enlisted in 2004. He was deployed to Korea and then to Iraq. He had served five years of active duty when he refused orders based on religious reasons.

One of the people testifying against Bishop at his court martial was the chaplain he had hoped would listen to his concerns. Instead, Lt. Col. Ronald Leininger had reduced the amount of time scheduled for their original interview and then repeatedly took phone calls during the session. In his official statement, the chaplain said that people with Bishop’s religious heritage were “generally pro-military service with no pacifist tendencies in doctrine or practice.”

In large part, the reduction in sentence is due to the dogged perseverance of GI rights attorney James Branum, and the public pressure that was brought to bear. Sgt. Bishop’s clemency request included 433 letters (signed by a total of 538 people from 21 different countries). Many came from pastors who disagreed with the military chaplain’s view on their churchs’ support for conscientious objection.

Through his attorney, Sgt. Bishop relayed his thanks to all his supporters. He said he had no regrets and urged others who are feeling moral conflicts with war to follow their conscience, but not to wait as long as he did to get help.

Attorney James Branum released the news of Sgt. Bishop’s early release and ackowledged many supporters, including the GI coffeehouses, Under the Hood in Killeen and Coffee Strong near Fort Lewis in Washington, Amnesty International’s London office and Courage to Resist. Sgt. Bishop’s release is expected to be no later than March 31, based on the amount of good behavior credit he has earned.

Supporters of Sgt. Bishop can find instructions on writing him at www.couragetoresist.org.