Shelby Knowles :
METRO | Pulling the rug on the
Rundberg promise

Funding has dried up for an ambitious community policing program that has been a huge success. 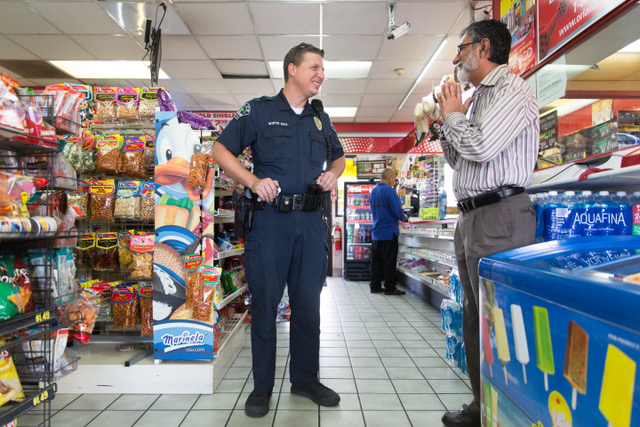 AUSTIN — Austin cop Taber White enters a gas station on the corner of Interstate 35 and Rundberg Lane and is welcomed with a joyful “Good Morning!” by the cashier, a man named Mohammed (who didn’t want his last name used).

White has been visiting this gas station, and walking the streets in this neighborhood, for more than three years as as part of an ambitious community policing program called Restore Rundberg. The project started three years ago as a way to have officers like White walk the beat, talk to residents, and be the “human face” of the police department.

It was meant to be, hopefully, a way for Austin to avoid the kinds of fiery, violent, eruptions that have plagued Ferguson, Missouri, and other places where relations between the cops and the community reached a breaking point.

By almost all measures, the program was a huge success: Since April 2014, violent crime in the neighborhood fell five percent and property crime decreased by 14 percent, according to data from the University of Texas at Austin.

Officers like White will continue to walk
the beat, but only once a week.

But funding for the effort dried up in September. Moving forward, officers like White will continue to walk the beat, but only once a week. Instead of focusing solely on community policing efforts, officers’ attention is diverted to more immediate concerns.

And almost everyone — including cops, residents and experts — says the area could suffer setbacks once the program ends. In fact, now that the program has been curtailed, it is already starting:

The area is beginning to see more crime, says Michael Lauderdale, a UT-Austin social work professor who has been advising the program. “This will happen if you remove well-trained officers and give them less time to deal with problems. Crime rates will increase naturally.”

The cops who walk the beat know, firsthand, what it means:

“Where’s the time for problem solving when we are just trying to keep order?” says Officer White.

Once a week, White goes business to business, checking on employees and greeting residents, many of whom know him by name. Outside Harmony Science Academy, children run to the fence to say hello from the playground. He continues down the street with a nod and a smile.

He’s here for the community — one of the most overlooked, neglected, in the city.

White passes a man in a wheelchair at a bus stop, holding a can of beer wrapped in a brown paper bag. White reminds him that open containers of alcohol are not permitted in public, but without issuing a citation or written warning, he continues down the street. White says he isn’t in the neighborhood to write tickets and make arrests, he’s here for the community — one of the most overlooked, neglected, in the city. 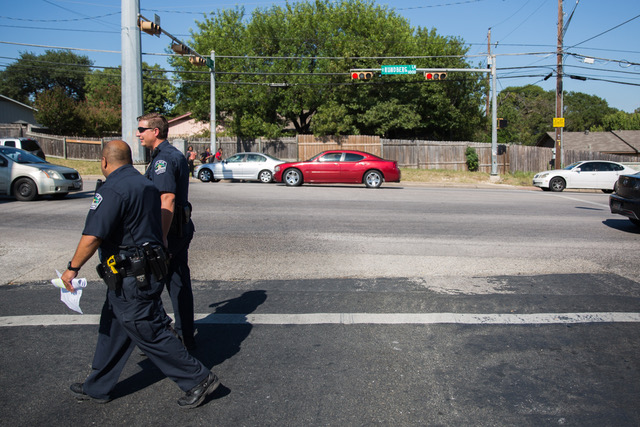 The Rundberg neighborhood, a six-square mile area in northeast Austin, accounts for five percent of the city population while contributing 11 percent of all violent crime and 34 percent of all prostitution in the city, according to Austin Police Department data.

“People saw it as: If you want some cocaine and prostitutes, you go to Rundberg,” said White.

That began to change in 2012, when APD received the million dollar, three-year grant to begin the “Restore Rundberg” project, highlighted by the “Mobile Walking Beat” and an all-volunteer “Revitalization Team.” The grant was scheduled to end in November 2015, but was extended until this September.

The new approach aimed to engage the community in the conversation.

The idea was always simple: reduce crime and improve the neighborhood. Traditional strategies — traffic stops and arrests —  hadn’t been working. The new approach aimed to engage the community in the conversation.

When the project began, only 34 percent of those asked said they felt secure in the neighborhood. A year later, 74 percent of residents reported feeling safer.

But getting that conversation started was difficult, according to Lauderdale.

“[The] first thing we had to do is realize that people up here are going to be very anti-police,” said Lauderdale. A University of Texas research team established a survey to determine who lived in and around Rundberg and what their attitudes were towards the police. Rundberg is home to a diverse population, with immigrants from the Middle East to Asia to Africa to Central America. A 2013 study showed that the area is more than 60 percent Hispanic, but has large Middle Eastern, African, and Asian pockets.

Some of the community’s distrust of law enforcement stems from dishonest policing systems in some native countries, where the ironic joke was that “you don’t want to trust cops, you want to leave them a tip,” according to Lauderdale.

The Rundberg area also has a homeless population, some lower than average housing prices, and a number of refugees. According to census data, 30 percent of Rundberg residents live below the poverty line and 64 percent speak a language other than English — and that led to the cops consulting with social service workers to figure out ways to best help the community.

“The actual root issues, [the police] don’t have anything to fix that. Some things should be handled at a city, state, and federal level, not at a law enforcement level,” said White. “Asking us to solve the problem with handcuffs is a temporary fix.”

Rundberg officers coordinated with the city to fix the street lamps in order to help people feel safer.

White recalls community members feeling uncomfortable about how dark the streets were. Although not a police matter, he and other Rundberg officers coordinated with the City of Austin to fix the street lamps in order to help people feel safer.

In one zone around Rundberg, the homeless population was involved in 44 percent of violent crimes, either as victims or perpetrators. In response, the Restore Rundberg team contacted homeless advocates to assist in reconnecting residents with family or to find housing. A year later, violent crime in the Rundberg area dropped by 44 percent, with zero crimes reported involving a homeless person.

“When I started working [at the gas station] three years ago, the crime rates were very high at the time,” said Mohammed. “The police told us to call them at any time, so we did it.”

Mohammed moved to Chicago from Pakistan 27 years ago and then moved to the Rundberg area in 2000. Although he no longer lives in the area, the gas station where he works is located in a “hotspot” that once had some of the worst crime rates in the city, according to White.

Restore Rundberg emerged in the wake of previous, failed initiatives that had only deepened community skepticism. According to Lauderdale, the project sought to change the mindset of the community through constant communication — a difficult feat for a population that tends to distrust police. The police needed to be viewed as “individuals who are trying to assist families and individuals in having a better life in the community, not as an occupying army,” he said. 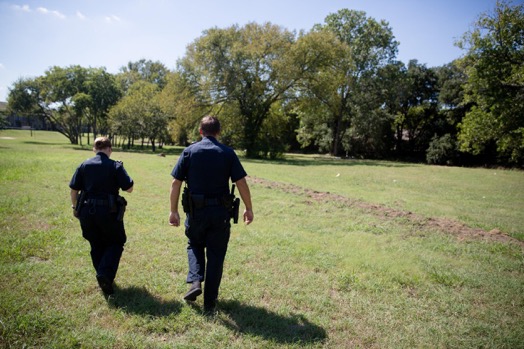 Cops investigate a report of a naked, homeless, woman –- but they might not be walking the beat anymore. Photo by Shelby Knowles /
The Rag Blog.

One part of the Restore Rundberg project — the volunteer, resident-led Revitalization Team — will try to continue without the grant money. The 15-member group works with businesses, service organizations, and city staff in order to do community cleanups and beautification projects.

“We’ve got to keep this initiative going, otherwise this is going to be another failed attempt to restore the community,” says Monica Guzmán, one of the Revitalization Team residents. “We are just now beginning to remold how we are going to do things.”

The team is trying to figure out how to
keep the police engaged.

The team is trying to figure out how to keep the police engaged — perhaps by inviting an officer to be a permanent member of the Revitalization Team advisory board. The debate continues, with some Rundberg residents confident they don’t need the police over-influencing a community-based organization: “Now that we are post-grant, I think [the community] would like to see us separate from APD… Some community activists think APD is controlling too much,” she said. 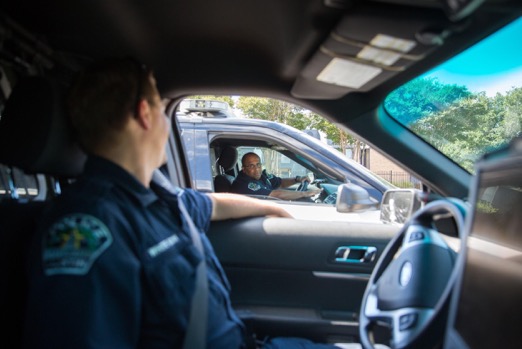 The cops along Rundberg are back to patrolling in their cars. Photo by Shelby Knowles / The Rag Blog.

In a fit of massive irony — considering the program is no longer being funded — Restore Rundberg was named a runner-up for the Herman Goldstein Award for Excellence in Problem-Oriented Policing. The award recognizes innovative programs around the nation and world. Meanwhile, other cities have expressed interest in replicating the Restore Rundberg program, including San Antonio, where the local housing authority recently received the same grant that once funded Restore Rundberg.

Nationwide, high profile deaths of minorities while in police custody throughout the country — Tamir Rice in Cleveland, Michael Brown in Ferguson, Freddie Gray in Baltimore — have resulted in increased police-community tensions and alarmingly low public trust in law enforcement. Police in Austin are currently under intense scrutiny for several officer-involved shootings, especially against non-white citizens.

In February, the city saw outrage after police shot and killed an unarmed black teenager: 17-year old David Joseph, who had been naked and acting erratically. A study released by the Center for Policing Equity — a University of California, Los Angeles research and think tank — found that Austin Police used force against the city’s African-American population more often than it did against white or Latino residents.

White knows that not all residents view the police as impartial and unbiased.

White knows that not all residents view the police as impartial and unbiased. It’s a tall order in the current, charged atmosphere. For now, as the clock winds down on the time he’ll spend walking the beat on Rundberg, he holds out hope that his contribution will be lingering:

“You have to have that involvement and trust has to be made,” says White. “Even if it’s incredibly difficult.”

[Shelby Knowles is a graduate student at the University of Texas at Austin where she studies journalism and visual storytelling. She previously did a year-long photo editor fellowship with The Texas Tribune. She is a graduate of Nutritional Science from Texas A&M University, where she worked as photo editor for The Battalion. Her work has appeared in The Texas Tribune, The Houston Chronicle, and The Austin-American Statesman.]

1 Response to Shelby Knowles :
METRO | Pulling the rug on the
Rundberg promise