Shepherd Bliss :
Neighbors come together to build the village 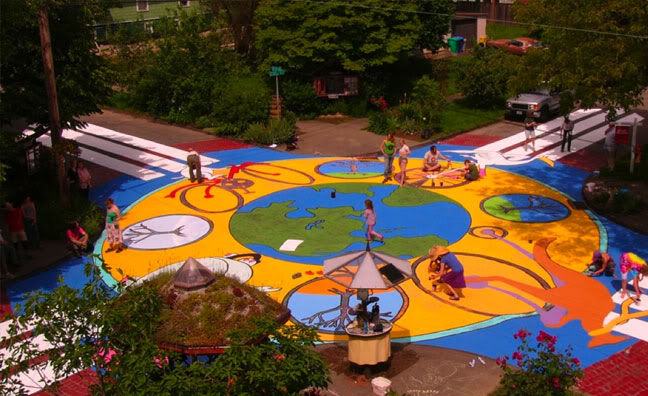 The Village Building Convergence is “an annual collaboration and cross-pollination of neighbors, groups and civic partnerships” that involves citizens “coming together to shape their common spaces” with projects that “may take the shape of benches on corners, street painting projects, sharing kiosks, natural building projects and a multitude of other ways to inspire neighbors to gather in public spaces.”

A 10-day Village Building Convergence has taken place in Portland, Oregon, for the past 14 years,  and for six years in East Montpelier, Vermont.

After an hour-long discussion at its August 5 regular meeting, the Sebastopol City Council voted unanimously to permit the VBC to occur on public property from September 12-September 21, 2014. Some local merchants have welcomed VBC to beautify their places. In addition to art and natural building “place-making” projects, there will be a series of community events and festivities hosted at various sites.

Planning Director Kenyon Webster began with a staff report supporting the 10-day festival and its “community process,” which includes seven place-making projects in various parts of town. The VBC website describes place-making as “the act of locals coming together to shape their common spaces in a way that promotes beauty and community.”

A major art installation will be done by Cittaslow Sebastopol, one of the 180 Cittaslow cities around the globe. It plans to paint murals on parts of McKinley Street, creating a stronger connection between the plaza/downtown and The Barlow, a recently developed complex of restaurants, art galleries, and stores. Other projects include contributing to the library landscaping, painting Community Market’s stage bordering on Highway 12, and a parade to conclude the festivities. The VBC seeks to support local merchants and attract customers to their operations.

“VBC is a like a dream come true,” commented Councilmember Sarah Gurney. She added, “Let’s talk about next year to continue the momentum.” Councilmember Una Glass added, “This is a great project that brings the community together.” Councilmember John Eder appreciated “this large number of purpose-driven people.”

Around two-dozen VBC, Cittaslow, and other activists attended the meeting and about a dozen spoke about VBC’s importance. Cassandra Ferrera began the public discussion with a slide show revealing some of the art that the VBC plans to install. That art includes natural images of both animal and plant life.

“It is truly awesome to feel the support of the City Council and staff to bring into fruition what the people of Sebastopol are so excited about,” wrote Ferrera the day after the meeting. “The VBC is a powerful vehicle for civic engagement, as together we co-create our commons” 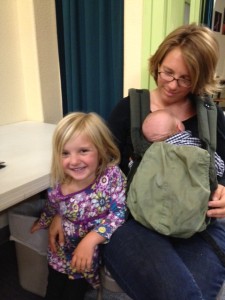 “I like painting,” three-year-old Tulsi Jennings commented while being lifted to the microphone by her father Sean, as her mother Mary cared for her infant brother Walker. All four had attended a VBC planning meeting the day before at Community Market, where the children brought delight to the meeting as they played on the nearby lawn.

Councilmember Eder added how glad he was to see young children and family members at Council meetings. At a previous presentation to the Council, VBC initiators Sebastian and Jeanna Collett brought their infant Obie. Sebastian is an architect who brought the VBC concept to Sebastopol from Portland, where a group called City Repair has hosted VBCs for the last 14 years. The Colletts live on a four-generation family compound in Sebastopol.

City Repair founder Mark Lakeman will offer both a talk and a workshop on September 21. The afternoon workshop is entitled “Healing Village” and is described as learning how to “receive healing touch and support (and) talk about how to bring healing more mainstream into our culture.”

‘I am thrilled to see a community activity that engages Sebastopol in improving our town and having fun at the same time!’

“I am really excited about the VBC,” wrote Councilmember Glass the day after the meeting. “I am thrilled to see a community activity that engages Sebastopol in improving our town and having fun at the same time! I am especially glad to see young people learning the ropes of civic engagement, so we can transition our governance to new generations. We need to welcome and encourage more youth, young families, and diverse cultures to participate in our community life. The VBC is a perfect vehicle for building a strong, happy, diverse and prosperous community,” Glass added.

The VBC proposal is a community-driven effort by Sebastopol residents and their Sonoma County allies. One man came from Ukiah in nearby Mendocino County and testified in support of the VBC, which expects to attract people from throughout California’s North Coast and beyond. This contrasts with building projects by developers from outside. This effort is by the community, of the community, and for the community.

Among the groups collaborating to create the VBC are Daily Acts (based in Petaluma), the Permaculture Skills Center, Sebastopol Grange, Cittaslow Sebastopol, Ceres Community Project, Transition Sebastopol, and Transition US.

“The international Cittaslow (Slow City) movement holds to six priorities, one of which is creating community-friendly infrastructure,” writes Co-Chair of Cittaslow Sebastopol, Tasha Beauchamp. “We were immediately attracted to the VBC because of its grassroots artistry and the way that it mobilizes the community to create the solutions they need for their neighborhoods. The results of a community meeting in Sebastopol identified a need for a stronger connection between downtown and The Barlow. Painting street murals was an obvious and fun way to do this.”

“Transition US seeks community-engagement models to replicate nationally,” said Transition US co-director Carolyne Stayton. The national office of the over 150 Transition initiatives is based in Sebastopol. “Village Building Convergence could just be one of these” efforts to go national, according to Stayton. 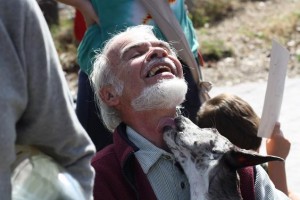 “The Grange actively supports projects such as the VBC, which is inspired by young people. We are doing that with the Farmers Guild, Global Student Embassy, 4H and now the VBC,” commented Sebastopol Grange treasurer Gary Abreim. The Grange is the oldest agriculture-based group in the United States, going back some 150 years and is currently experiencing a renaissance in California.

“Among the important issues discussed was the role of public education and permaculture design to make our water use more sustainable in light of the drought,” pointed out Marissa Mommaerts from Transition and the Post-Carbon Institute. She later wrote the following:

VBC organizers have been collaborating with the Sebastopol mayor and City Council to identify and work toward shared goals, including creating a more cohesive and walkable downtown; supporting existing City projects and local non-profits, including the development of a public food forest; and community engagement.

VBC activists spoke about having a tent for meditation.

Councilmember Patrick Slater advocated “the need for a place for introverts who do not like loud things like parades. Creating a safe space for introverts would be important.” At a celebration after the meeting at Hopmonk Tavern, VBC activists spoke about having a tent for meditation.

Among the events VBC discussed were a Share Fair where items would be exchanged, as well as bike repair, hair cutting, massage, and clothing repair. A Family Day is scheduled, as well as pot-luck meals. A tour of the La Tierra intentional community is planned, as well as puppets on site and conversation cafes. An Equinox Ritual will close the 10 days, drawing attention to natural seasonal changes. Live music, poetry, and other art forms will be presented.

A Village Building Convergence may soon come to your town or city, perhaps guided by the successful models. VBC is a positive alternative to toxic things happening in the world. Come visit existing VBCs in Portland, Sebastopol, Vermont, or elsewhere where they are likely to spring up. Then you can organize one in your place.

[Shepherd Bliss (3sb@comcast.net) has taught at various villages, including Findhorn in Scotland, Hollyhock in Canada, Sonoma State University, and CIDOC in Cuernavaca, Mexico. He has operated the Kokopelli Farm in Sebastopol for the last two dozen years. Read more articles by Shepherd Bliss on The Rag Blog.)