Sherman DeBrosse : An Economic Enema to Chill the Meltdown 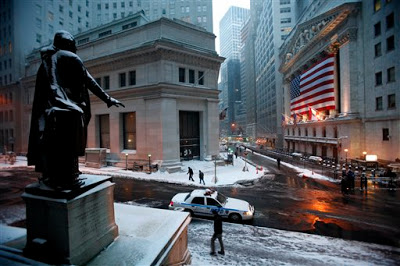 People walk to work in the snow as they pass the flag-draped New York Stock Exchange Monday, March 2, 2009. Photo by Mark Lennihan / AP.

The Geithner Plan may be good economics but it probably is terrible politics.

The Dow and Obama

Last night, an evening news anchor said that the plunging Dow registered investors’ belief that President Barack Obama’s policies were not helping the economy or fixing the financial system meltdown. The fact is that the Dow does not reflect what is going on in the economy, and it does not reflect political opinion.

This line of reasoning demands that Obama be a miracle worker. In the last twenty months, about half the world’s wealth has evaporated, and Obama is supposed to fix it in a matter of weeks!

Obama cannot be blamed for the insolvency of the banks. That was a result of Republican economics. Yes, some Democrats bought into the new ideas, but it was largely Reaganism and Phil Gramm economics. Now John McCain, a big Gramm backer, wants to investigate what happened! What a joke! But if this disaster goes on too long, current Republican efforts to blame him will pay them big dividends.

The Dow is going down because investors know the financial system is broken and insolvent, and they fear that the fix will be painful for them. Some, of course, have listened too much to talk radio and Republican interviews on the cable stations. They fear “nationalization” and “socialism” but would be hard pressed to define either. The obverse of these fears is that the bank managers have done a wonderful job so far.

Headlong panic could doom the Geithner Plan, no matter how excellent it may be.

Setting aside their fears and the real “panic” that exists in the investment world, they have a point in wanting to know exactly what the Geithner Plan is, what banks will be reorganized, and how shaky assets will be assessed. He has kept to very broad outlines because he shares the fear that there is insolvency across the board and because he needs flexibility in addressing it.

The problem is that panicked investors are incapable of patience or even thinking clearly about this. So long as these questions are not answered, the market will plunge over the several months needed to conduct the “stress tests” and for the banks to, probably unsuccessfully, seek private refinancing.

As long as there is uncertainty, investors will stay on the sideline watching the bloodbath and shareholders will keep dumping their stocks.

The continued dramatic drop of the Dow will further reduce confidence in the economy and will begin to rapidly chip away at confidence in the Obama Administration. It will make recovery so much more difficult and will, though unfairly, do infinite damage to Obama and the progressive cause. Republicans are busy talking down recovery efforts and claiming Obama has “cooked the books” when pointing to any sign of hope.

We now know that the Obama Administration thinks another $700 billion is needed to continue the bail-out. If the market continues to plunge, it will be exceedingly hard to get votes for this. Moreover, the folks in Congress do understand the absolute rage most people feel toward the banks.

The current Geithner Plan and the proposed new TARP must be considered together. Maybe this writer has been wrong in saying an approach modeled on what happened in Japan was wrong. Assume a Japanese-style rescue approach is theoretically correct. The fact seems to be that it will take too long to implement and will drive the Dow and public confidence to an unacceptable level. Phase two of this effort seems to be raising another $700 billion to continue the bailout. Finding votes for that will be very, very tough and will cost many Democratic seats in November, 2010. Unless the Democratic leadership and Obama people are sure the GOP will provide half the votes for the Second TARP, a course change is absolutely necessary.

The near impossibility of getting another TARP might save us from just sustaining “zombie banks” through what has been called “the shovel method” and producing a lost decade.

The Geithner plan makes some sense, but it is a political time-bomb and unworkable without a huge second TARP. We need a second best plan that passes the political tests.

A few of the deans of the punditocracy write that great presidents can get beyond partisanship and that Obama should continue to reach out to the GOP. So far we saw a near brick wall of opposition to the stimulus package and GOP’s, led by Corker and Shelby, trying to push GM and Chrysler into bankruptcy, throwing millions out of jobs. Even FDR could not have charmed these blind partisans. Obama should follow Ronald Reagan’s advice, “Trust but verify.”

We need “Plan B” now — sort of an economic enema

If the current plan is creating too much uncertainty and cannot be completely carried out, we need to think about a second-best approach that can be performed quickly and decisively. Hopefully, its implementation would commit the taxpayer to far less immediate debt.

To buy time and perhaps stimulate growth, four steps—three of which are usually anathema to progressives—could be tried to, promote confidence, buy time and slow the slide.

“Plan B” should simply build on the existing plan. Given that Paul Voelker is a key Obama advisor, a good guess is that the Geithner plan is designed to slowly release the remaining air from the Bush bubble. The problem is that the fear out there was underestimated.

We read that the “stress tests” do not take into account exotic assets and liabilities. They must be thoroughly examined. There is a New Deal lesson we must heed. Conservative scholars may be correct in saying that hundreds of millions were wasted trying to recapitalize insolvent banks. It might be better to just let them sink, more or less at once.

When the tests are done, Geithner should announce that the most insolvent banks must be left to bankruptcy. Market forces must be permitted to do their work. Weak banks can be restructured and combined, with losses being carried by stockholders.

If the second TARP is unattainable, the only recourse is to move swiftly to let market forces quickly and decisively resolve the situation. It might mean more pain for the GOP’s constituencies—banks and bankers, but it will speed the recovery.

To the extent possible, the FDIC will guide restructured banks, and they can be partly recapitalized with money from the Fed. All the bad assets must be identified, purged, and revalued. If there is no TARP money to purchase them, they should be given current market value and placed on contingency basis in a federally operated aggregator bank.

Make a distinction between the everyday banks that loan money for things we can see and use and those at the top of the pyramid that engage in issuing exotic instruments and casino capitalism. Focus on fixing the former and seeing that any aid advanced to them cannot be sent up to whatever is left of the bank holding companies.

Of course, the U.S. needs banks at the top end, but we can build around those we have already subsidized.

When all the smoke clears, borrow a Republican idea and introduce a new insurance scheme for banks and phase it in gradually, perhaps with partial premium write-offs at first.

It will be very messy for some time, and the Dow will fall to new lows. This was going to happen anyhow under Plan A. But the purge could well work if it is sufficiently thorough. There does not seem to be any other choice given the strong possibility that the Congress and public simply will not accept borrowing hundreds and hundreds of billions to bail out the irresponsible bankers.

It is a shame we could not fix the banking and securities sector in several weeks as did FDR, but the problem is so much greater and more complicated.

Take out some insurance — plan for more setbacks

The GOP is banking on a deepening crisis

The political dimensions of this are fascinating. One cannot help but wonder if the Bushies warned the GOP on the hill that the problem was so darned big that there was no clear solution. A long banking crisis means a long depression, and that most likely would provide political dividends for the GOP.

We see every day that Rush Limbaugh, who calls for Obama’s failure, has become the party’s most important spokesman. Former Speaker Newt Gingrich has emerged from retirement as their most important tactician. Remember when he and his followers called opponents “traitors;” now he says the “secular left” is driving “God out of the secular affair.” We can only imagine the line he will take on the Bush depression. His rule or ruin, scorched earth, take no hostages obstructionism was rewarded by the American people in the election of 1994 with turning over the House of representatives to him and his party. Previously, his approach took years of throwing monkey wrenches into the machinery of government. This time, a few years of obstruction might be enough for many voters to give up on this creative, bright and idealist president and go back to the party of trickle down economics.

It is doubtful if most Republicans think beyond blocking useful legislation, demanding more tax cuts for the rich and reciting easily understood but childlike bumper-sticker formulae. But some, like Gingrich, would seize the opportunity to scrap entitlement programs, privatize as much as possible, slash taxes for the rich and resume using our armed forces to pursue abroad the economic objectives of the great interests on Wall Street. They would also have the internal security apparatus begun by Ronald Reagan and Ollie North and vastly increased by George W. Bush to subtly cripple their opposition.