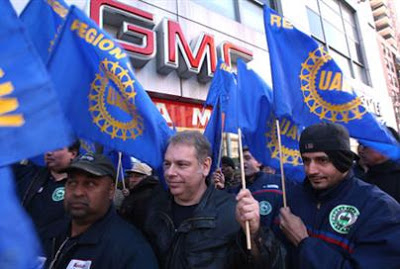 The U.S. economy is so fragile that the Congress must extend a bridge loan to the Big Three automakers. The loan should give the government part ownership in the industry and guarantee that cost-cutting and modernizing measures will be undertaken immediately. To do otherwise is to risk greatly deepening the recession and putting at least three million people out of work. That is a conservative number, when we consider the goods and services purchased by parts manufacturers and their employees. In a very fragile economy, the ripple effects of shutting down the domestic auto industry could be enormous and take years to repair.

Most Americans believe that the Big Three have made many poor decisions, but the matter of a bridge loan should be decided on the basis of whether this is a good time to punish Detroit. The important questions are: Is it safe to risk the collapse of the domestic automobile industry at this time? Is it in the interest of the United States to have a domestic auto industry? Does having a domestic automobile industry have anything to do with national security? (Hint — think of World War II.) Is its existence key to our “industrial policy?” Some will say we have no industrial policy, but we have one that is clearly written into the tax code and other legislation.

The heads of the Big Three were foolish to come initially to Washington in private jets, and appear so ill-prepared to answer tough questions. These execs came to Washington expecting to be treated like the heads of AIG and CitiCorp — few questions and an open checkbook. As far as we know, the financiers who received help were not grilled or asked for recovery plans.

As inept as they appeared, there is evidence that these huge firms had finally gotten on the track of improving their companies. They cannot be entirely blamed for the present crisis. It was a result of a recession that has been growing worse since October, 2007 and then a credit lockdown that came about as the financial system almost completely imploded. The financial crisis has driven auto sales down 60% in the United States. The European auto industry is also on the ropes and is about to receive over $50 billion in government bailouts.

Yes, they should have been making more efficient cars and fewer SUVs, but the customers wanted the SUVs. Even recently, SUV sales went up when gas prices declined. We cannot blame the Big Three for having short-sighted customers.

Many of the opponents of a bailout mention the industry’s failure to produce energy-efficient cars as proof that Detroit’s leadership simply come up with products that people want today. There is much merit to this argument, and we all recall what happened to the ill-fated electrical car in 1999. But the Republicans who raise this argument usually were not friendly to raising fuel efficiency standards in the past.

Richard Shelby of Alabama is their main spokesman. Some other Republicans, like Shelby, have an interest in seeing the Big Three go under because their states have invested millions in helping foreign auto producers set up shop here.

The unnoticed elephant in the room is Republican dislike of unions. Republicans often overlook recent UAW concessions and complain about wages and severance and retirement packages. The fact that more than 41 Republican senators have agreed to filibuster a bridge loan is rooted in ideology and dislike of unions. Now some of the Republicans say the UAW should shoulder more of the burden of health benefits for retired workers in return for equity in the companies. And of course, we are told that the UAW would have to accept wage cuts down to the level of workers in Japanese-owned plants here. Truth is that the UAW has already accepted a portion of the burden of retiree benefits and has made concessions that will bring wages to the level of employees in Japanese owned-plants. The UAW claims that its wages are already at the level of one of the Japanese manufacturers in the US.

We are hearing that there could be a compromise package offering considerably less that 20 billion — just enough to get the companies to March, when the new administration will be able to help. No matter what the package engineered between the execs, White House, and Congressional leadership might be, it will be very difficult to head off a Republican filibuster. This might be the last chance to smite the UAW with a filibuster as we now know that it is legal to use funds from the $700 bailout package to rescue the nation’s largest industry. The Obama administration can use that money without dumping on the UAW. Another option would be to use Federal Reserve funds for the bailout; that too is legal. Chairman Ben Bernanke has been absolutely silent on the subject. A FED bailout would move the matter out of the political arena. It would be a judgment made purely on the basis of economics.

If the matter must be resolved in Congress, Democratic supporters of assistance will have to swallow steep wage and benefit cuts. If President-Elect Barack Obama is forced to specifically endorse a short-range plan that inflicts great pain on the workers, he has spent precious political capital and probably hurt himself with those workers. There are still many UAW folks who detest their leadership for previously making concessions that were absolutely unavoidable.

At the moment, 60% of the American public opposes any bail-out. Much of this is bail-out fatigue mixed with anti-union sentiment. Many who work for wages far below union scale resent other workers getting a bigger slice of the American dream, and many traditional Republicans simply cannot understand why any worker should want more than $15 an hour. Then there is the old argument about how best to reignite an economy. Most Democrats believe the depression of 1929 was caused by underconsumption, and think it best to put money in the hands of ordinary working families. On the other side, we are again reading arguments that all of FDR’s public works accomplished little. The remedy is to place a still larger share of the money supply in the hands of people at the top of the economic pyramid because they will almost certainly hasten to use it to create new jobs. The former view is informed more by ideology — economic theology — than solid analysis.

The fact is that the financial system still needs a great deal of repair; that is why the banks and other credit institutions are not making loans. Many of them are leveraged over 100% and invested in toxic mortgage and other questionable assets. The recession got a lot worse as soon as it was clear that the financial system was cratering. Half a million jobs were lost in November alone, and experts just found that job losses in previous months were far worse than reported. If GM and Chrysler are forced into bankruptcy, unemployment will explode–this is all about the velocity of money. The fear and panic created by the loss of much of the domestic auto industry will send the real economy into an absolute tail spin. Ten percent of the domestic bond and preferred securities market is in the automobile industry. The collapse of much of the auto industry could create a situation on the markets that could take decades to repair.

All of this should boil down to what is best for millions of workers. It’s the old saw about economics being made for people and not visa versa.

Much will depend upon whether Republican senators are guided by pragmatism or ideology and economic theology. This week, we will know if a compromise is possible or if the FED will give all of us a way out of this dangerous situation. Much will depend on whether the GOP can keep in line 41 pro-filibuster Senators. Auto parts suppliers are in many states, and troubled dealerships are everywhere. Should the filibuster strip people of their incomes, it is hard to imagine Republicans not losing more than a few votes among people directly and indirectly tied to the automobile industry. It could even happen that people who see no connection between themselves and the industry will be hurt, and some of them might possibly figure out what happened to them.

If there is no relief, the Big Three would be well advised to take any steps necessary to curtail spending so that they can remain in place for federal assistance next January or February. The new Congress will have larger Democratic majorities, and passage of a suitable bail-out will be more feasible.

1 Response to Sherman DeBrosse : Big Three Bailout a Must