Hundreds of civilians die each month in the failed state of Iraq, they have no potable water, no power on a regular basis, inflation runs rampant, and crime has become a way of life for many. But our military planners, in their infinite wisdom, have the time to plan a fucking golf course for the Green Zone in Baghdad. If that’s not a sign of a sick society (and I am talking about Amerikkkan society, not Iraqi), I don’t know what is … 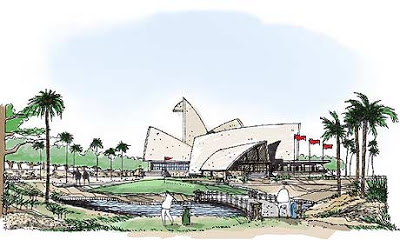 A plan by US military planners for the “Tigris Woods Golf and Country Club” in the Green Zone in Baghdad, Iraq. Photograph: US Army/AP

Luxury hotels and golf: welcome to the Green Zone
By Michael Howard / May 6, 2008

Picture, if you will, a tree-lined plaza in Baghdad’s International Village, flanked by fashion boutiques, swanky cafes, and shiny glass office towers. Nearby a golf course nestles agreeably, where a chip over the water to the final green is but a prelude to cocktails in the club house and a soothing massage in a luxury hotel, which would not look out of place in Sydney harbour. Then, as twilight falls, a pre-prandial stroll, perhaps, amid the cool of the Tigris Riverfront Park, where the peace is broken only by the soulful cries of egrets fishing.

Improbable though it all may seem, this is how some imaginative types in the US military are envisaging the future of Baghdad’s Green Zone, the much-pummelled redoubt of the Iraqi capital where a bunker shot has until now had very different connotations.

A $5bn (£2.5bn) tourism and development scheme for the Green Zone being hatched by the Pentagon and an international investment consortium would give the heavily fortified area on the banks of the Tigris a “dream” makeover that will become a magnet for Iraqis, tourists, business people and investors. About half of the area is now occupied by coalition forces, the US state department or private foreign companies.

The US military released the first tentative artists’ impression yesterday. An army source said the barbed wire, concrete blast barriers and checkpoints that currently disfigure the 5 sq mile area would be replaced by shopping malls, hotels, elegant apartment blocks and leisure parks. “This is at the end of the day an Iraqi-owned area and we will give it back to them with added value,” said the source, who requested anonymity.

Potential investors are being encouraged to take a punt that years ahead, Baghdad’s fortunes may mirror former war-torn cities such as Sarajevo and Beirut that have risen from the ashes.

Marriott International has already signed a deal to build a hotel in the Green Zone, according to Navy Captain Thomas Karnowski, the chief US liaison. Also in the pipeline is a possible $1bn investment from MBI International, a hotel and resorts specialist led by Saudi sheikh, Mohamed Bin Issa Al Jaber.

One Los Angeles-based firm, C3, has said it wants to build an amusement park on the Green Zone’s outskirts. As part of the first phase, a skateboard park is due to open this summer.

American officials stress that final decisions about reconstruction and development rest with the Iraqi government. Karnowski added that as well as the benefits of renovating and demilitarising an important area of Baghdad, the blueprint would help to create a “zone of influence” around the massive new US Embassy compound being built on the eastern tip of the Green Zone. The $1bn project to move the embassy from Saddam’s old presidential palace is planned for completion later this year.

“When you have $1bn hanging out there and 1,000 employees lying around, you kind of want to know who your neighbours are. You want to influence what happens in your neighbourhood over time,” Karnowski told Associated Press.

He acknowledged that any project would face formidable difficulties: “There is no sewer system, no working power system. Everything here is done on generators. No road repair work. There are no city services other than the minimal amount we provide to get by.”

There is also the not insignificant matter of the dire security situation. Shia militants under attack from US and Iraqi forces elsewhere in the capital have been launching volleys of rockets on the Green Zone for much of the last month.

Despite the apparent Pentagon enthusiasm, other US officials in Baghdad seemed more sceptical. “We approach this with perhaps a dose of realism,” offered one. “These are issues for the Iraqis to discuss. We do not own the International Zone, and its future is really up to the Iraqis.”

For many Baghdad residents, the Green Zone has been a no-go area for years, first under Saddam and now under the occupation. “What do I care?” shrugged one, Ahmed Hussein. “I don’t have electricity, I don’t have fresh water and I don’t have a job.”

This entry was posted in RagBlog and tagged Iraq. Bookmark the permalink.