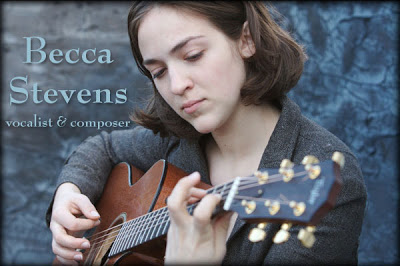 Becca Stevens was born into a musical family in North Carolina and was on stage by the age of two performing her father’s music. When she was ten she starred in a year-long national tour of The Secret Garden. Becca graduated from high school at the N.C. School of the Arts as a classical guitar major, and graduated college in ’07 studying vocal jazz and composition at The New School University in Manhattan. Outside school, Becca plays solo performances in New York and writes and arranges music for the Becca Stevens Band (BSB). Aside from her own band, Becca is the regular singer with Travis Sullivan’s Bjorkestra. Becca collaborates with other musicians in the city and has written lyrics for and recorded with Frank LoCrasto on his record “When You’re There” (released in 2006 on Max Jazz), and for Jeremy Pelt’s band “Wired” (also released on Max Jazz, ’07). Becca has also recently recorded with Sam Sadigursky (The Words Project), Andy Milne’s “Dapp Theory”, Travis Sullivan’s Bjorkestra, and on The Solos Unit’s “Electric City” (released in 2007). Becca teaches suzuki guitar and Music-in-the-Box at the Greenwich Suzuki Academy in Connecticut. Music-in-the-Box is a music readiness program for very young children.

This entry was posted in RagBlog and tagged Music, Singers. Bookmark the permalink.