A good Friend introduced me to this remarkable musician recently, and I felt compelled to share her here. Joanna Newsom’s style is unique in my experience, but her wit is appropriate for the Rag Blog. The tune is Inflammatory Writ, from the album The Milk-Eyed Mender. I hope you enjoy her as much as I do. 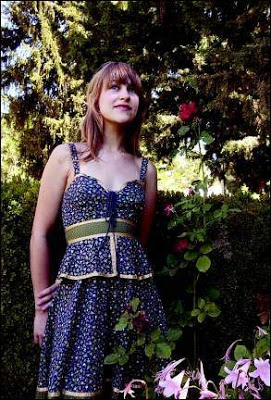 Newsom was first taught to play the Celtic harp by a local teacher in Nevada City. Later on she moved on to the pedal harp and started composing.

After touring with Will Oldham, she was quickly signed to Drag City and released her debut album The Milk-Eyed Mender in 2004. Shortly thereafter, Newsom toured with Devendra Banhart and Vetiver and made an early UK appearance at the Green Man Festival in Wales, returning to headline in 2005.

Newsom’s work has become prominent on the indie rock scene, and her profile has risen, in part due to a number of live shows and appearances on Jimmy Kimmel Live on ABC.

Her second album Ys was released in November 2006. The album features orchestrations and arrangements by Van Dyke Parks, engineering from Steve Albini, and mixing by Drag City label-mate Jim O’Rourke. On a road trip, Bill Callahan recommended she listen to the album Song Cycle by Parks, which led to his being chosen to arrange her work on Ys.

During her 2007 fall tour, Newsom began performing a new as yet untitled seven-and-a-half-minute song. In January 2008, Newsom debuted another new composition in Sydney, Australia. Then in July 2008 she debuted her third new song, a 7-minute piano piece at Latitude Festival in Suffolk, England, and later the same day debuted a fourth new piano composition in London.

Although her harp playing is not completely divorced from conventional harp techniques, she considers her style distinct from that of classically focused harpists. She has been strongly influenced by the polymetric style of playing used by West African kora players.[2] Her harp teacher, Diana Stork, taught her the basic pattern of four beats against three, which creates an interlocking, shifting pattern that can be heard on Ys, particularly in the middle section of “Sawdust & Diamonds.”

The media have sometimes labeled her as one of the most prominent members of the modern psych folk movement, although she does not acknowledge ties to any particular musical scene.[3] Her songwriting incorporates elements of Appalachian music, avant-garde modernism, and African kora rhythms.

Newsom’s vocal style (in the November 2006 issue of The Wire she described her voice as “untrainable”) has shadings of folk and Appalachian shaped-note timbres. Newsom has, however, expressed disappointment at comments that her singing is “child-like.”

Thanks to Betsy Gaines / Source of biographical information / Wikipedia