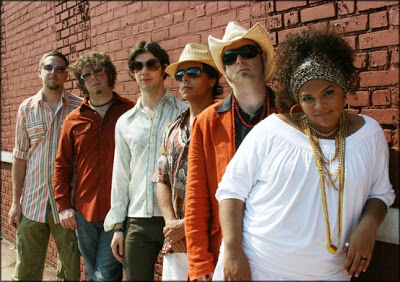 Which nation, and which beat? What makes this group special is that it offers no simple answers. They are rhythm gatherers, harvesting the fruit of 500 years of cultural crossbreeding, which is why the sounds of the northeast of Brazil and the southern United States blend together so seamlessly; NPR’s All Things Considered music writer Banning Eyre calls them “the most original and alluring fusion group I have heard in years.”

At the heart of Nation Beat’s Legends of the Preacher lies a totally original 21st century fusion between thunderous Brazilian maracatu drumming and New Orleans second line rhythms, Appalachian-inspired bluegrass music, funk, rock, and country-blues. Their explosive live show — which is frequently known to burst into crowd-wide Carnaval-style drumming and singing — is attracting music fans from a wide demographic: bluegrass and country music fans, Brazilian music lovers, outdoor festival-goers, and pretty much anyone who loves to dance and loves great music.