Single-Payer Health Care: Some Reasons to Do It 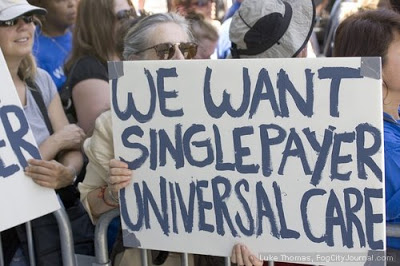 “The Americans will always do the right thing . . . After they’ve exhausted all the alternatives.” — Winston Churchill

PART I
After carefully following all the lies, partial truths, myths and wrong ideas I would like to offer some facts and my interpretation based on fifty years as a physician.

First I will try to list facts so you can judge my recommendations.

Our elected leaders have very little collective knowledge about health care and mainly listen to monied lobbyists rather than constituents.
I strongly encourage calling, emailing and writing your deciders; make them listen, that is your job and theirs in a Democracy. Having said that it does seem that they don’t listen to citizens, only to corporate cash.

The AMA is often cited as a voice for American physicians. Only about 19% of physicians belong to the AMA and many of these are retired or belong for the educational benefits. Most physicians genuinely put patient care first. After twenty four to thirty years of education some payback is fair. With the extreme delaying of gratification, few go into medicine purely for money. Most physicians put in fourteen or more hours a day and most work weekends as well. I say all this because about sixty percent of American physicians back a Single Payer system even though it may decrease their income.

We talk of preventive care. Some recent glib TV ads suggest that medical care is only needed for those who smoke, are over weight or don’t eat right. And anyone else should either not be covered or pay a penalty. This is a fairy tale and spending some time in an ER will promptly reverse this thought. First, accidents can happen to anyone. Infectious diseases are no respecter of the fit or unfit. Type I diabetes, Rheumatoid arthritis, much coronary disease, and hypertension are either chronic conditions not caused by poor diet or it’s only one factor. Even if poor fitness was a primary cause, few people live the perfect life and this argument for insurance charges are higher for people who deviate from certain eating standards they should also be higher for football players, race car drivers, divers and those who jog alone at night or have to drive a lot for work.

In all the bizarre recent babble about health care several words and phrases keep coming up. How about “Socialized Medicine,” “care plan unique to America” or “it costs too much.” This is only because Single Payer is off the congressional table and all the new plans require the insertion of private health insurance between the patient and physician with a 30% commission coming off the top.

Some ads suggest one can only retain choice freedom by remaining with private health insurance. Is that what they mean when they give you a list of providers and tell you to choose one for primary care even if your personal physician is not on the list? Medicare is available from any willing provider.

Socialized medicine is what they have in the UK. There physicians are salaried and the hospitals are owned or contracted by the government. This is similar to our VA and military medical systems and was chosen by President Bush and Vice President Cheney during their administration. This system works in spite of problems and has better overall outcomes than does our private insurance system with 18% of the population left out.

The Single Payer is a system with one insurance company: the government. This is like the Canadian system, our Medicare and Medicaid. While Single Payer is unmentionable in the media and in Washington there is no shortage of howling about cost of the plans under consideration. The Republicans say that a small repeal of the Bush tax cuts on the ultra-wealthy is too much of a burden for them to do for their countrymen even as they are relatively under-taxed . The super-rich already have tax breaks that the average American never sees.

If someone mentioned a way to save 30% on all health care covered by insurance it should get attention. Well, it’s Single Payer. The private companies have a 30-33% overhead, Medicare a 3% and the Canadian system is 1.5%. Thirty cents of every dollar you give your insurance company is not giving you care. Ninety-seven cents of the Medicare dollar works for you. You can see where outrageous corporate salaries in the eight figure range drain your dollars. (blogs.webmd.com/mad-about-medicine/2007/08/ceo-compensation-who-said-healthcare-is.html)

I’m sure you have heard the uninformed lately tell us that the American system is the best in the world. While the best we can do in research, education and care potentially can be as good as any country, it has to be averaged for all citizens; when this is done the US falls to 35th to 50thth place in the W.H.O. and other studies.

While those with money or the best insurance get excellent care, read Congress and the President, those with no or poor insurance drag the average down. The Single Payer system will give care to all, raising our overall level to compare with other first world countries. Having one payer will give some price control as Medicare does now.

Citizens must have access to screening procedures such as colonoscopy and mammograms because failure to detect these early cancers early can have devastating results and both diseases are curable with early detection.

The present plans to continue the use of health insurance companies will continue the waste of the first 30% of the health care dollar. Some in Congress suggested that we force all citizens to have private insurance giving the insurance companies another windfall from new clients, with some premiums paid by the government. This continues the welfare to the super rich and a drain on the Treasury.

One foolish Republican Congressman recently suggested that all, even the poor, be forced to purchase some basic kind of insurance. This will make the insurance companies happy, but the client’s inexpensive policy with a deductible of $10,000 will actually have no insurance value because they will not be able to meet the deductible and co-pay leaving them just as they were, but with more money in the pockets of the corporations that steal from the poor and give to the super-rich. This is a very Republican idea.

There are endless examples of the inefficiency of other country’s health care but ask these people for facts; have they talked with those citizens? Do they have an outcome analysis? Have they really looked at and compared with our system? One hears complaints about waiting. In the USA with money any visit or test is immediately available whether needed or not. This is rationing based on money. In Canada there are waits for elective procedures but immediate care for urgent conditions. Yes, it is rationing, but one based on medical need rather than money. There are some in this country who wait forever for any basic or preventative care.

Horror stories abound about delayed care in Canada or the UK but these are more illustrative of error by the primary physician than of the system. Physicians do make judgment errors here as well as in other countries. Watch the TV program, “Medical Mysteries on the Discovery Health network for our own examples of missed diagnosis, delayed treatment and poor care. A recently shown TV ad example discusses a delayed brain tumor in Canada treated promptly in the US. The “tumor” was actually a benign cyst and the ad very misleading. A few minutes on Google will document these falsehoods.

For some good recent discussions see:

Cost of Health Care Reform : Wails of Indignation from the Right and other “RAG BLOG” articles by Dr. Steven Keister and

To reach Dr. McAdoo, e-mail him at hwmcadoo@hotmail.com.

4 Responses to Single-Payer Health Care: Some Reasons to Do It