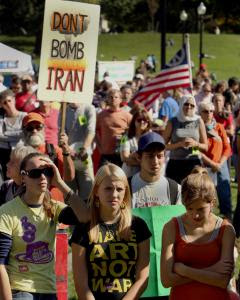 Carlos Arredondo has traveled across 20 states with his portable memorial to his son, a Marine who died in Iraq during his second tour of duty in 2004. But yesterday, Arredondo was home in Boston, where he shared his memorial of hundreds of scrap-wood crosses, combat boots, synthetic flowers, and photographs of Alexander Arredondo at an antiwar rally.

Hundreds of protesters, some carrying “war is terrorism” posters, others wearing fluorescent yellow “stop the war” stickers, gathered on Boston Common for a National Day of Action Against the War rally, on the sixth anniversary of the congressional vote that authorized the invasion of Iraq. Veterans, student activists, and politicians were among those who spoke against the war.

“As a father it is my responsibility to honor my son, to let people know how I feel about it,” Arredondo, 48, of Roslindale, said as he gazed at his son’s 20-year-old face staring out from poster-size photographs hanging at his booth. “That’s how wonderful the democracy in this country [is] – why we are all here today.”

Dozens of antiwar groups set up booths to sell T-shirts and hand out pamphlets. In the background, bands and solo performers performed on stage.

Jabbar Magruder, who served as a sergeant with the National Guard in 2005, came from Los Angeles to work as the coordinator for Military Families Speak Out, a Boston antiwar group. Magruder, 25, said he is working to debunk the glorified “Hollywood image” of war that too many people believe to be reality.

He said he felt deceived as a soldier in Iraq, where he said he thought he was defending the Constitution against foreign enemies, when the real threat to democracy was politicians at home who didn’t see his service in the same way.

President Bush has insisted that the invasion of Iraq, which began in March 2003, has made the world better and the United States safer.

But yesterday, local activists and politicians, including District 7 Boston City Councilor Chuck Turner, said the money spent on the war would be better used to benefit Americans, going to such issues as education and healthcare.

Turner encouraged people to look beyond a troop withdrawal. “We can create change, but not just by ending the war, but by pulling the roots out,” Turner yelled into the stage microphone. The roots, he said, is “a foreign policy that does not focus on peace” and an inflated military budget.

Liza Behrendt, a sophomore at Brandeis University, weaved through the crowds of antiwar paraphernalia and protesters dressed in a white Haz-Mat jumpsuit with a bright pink peace sign painted on the front and a Sharpie marker taped to the back. Behrendt said her “walking petition” outfit – she collected signatures on her back – was her effort to meet like-minded people outside her student group.

“Even if [the rally] doesn’t make concrete change, it energizes people,” said Behrendt, 19, who was disappointed only 13 students from her school attended. “How can people not be angry?”

Gabriel Payan, who said he deserted the Army in 2005 while in Germany, was angry. Profanities peppered the 29-year-old veteran’s speech about why he was “sick and tired of this war that has claimed the lives of my brothers and sisters.”

Despite his frustration, Payan said he speaks out because he thinks it gives people hope of change and encourages them to take action themselves.

“I’m not relying on my vote November 4th to make change,” said Payan, referring to the presidential election.

He said he believes it will be the footwork of Americans that brings peace.

This entry was posted in RagBlog and tagged Peace Activists, Peace Movement, Protest. Bookmark the permalink.