Skateboarders, Bloggers and Cops : One Little Victory for the People 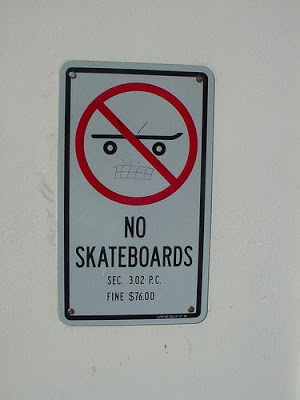 Gerry Storm, aka Dr. Mesmo, is a former Austin musician, activist and union leader who now lives in rural New Mexico. His interests combine the political with the spiritual.

He recounts here a triumphant parable of skateboarders and cops, and the role local bloggers play in one little victory for the people.

Gerry’s dispatch grew out of an exchange on the Rag Blog Group, a listserv that brings together contributors to and followers of The Rag Blog in a spirited discussion of our little mag, its role and potential in the besieged world of today’s journalism.

‘All the cops are fat, some are really fat, in tight shiny black outfits with bright buttons which reveal their waistlines and fat asses, with not quite shaved heads, and utility belts that include a pistol, handcuffs, etc.’

I live in (or rather, outside) a small community (10,000) in New Mexico that has a regular blog with activists using it, sometimes quite effectively. Lots of posts announcing local events, political rants, newcomers getting acquainted, the High Desert Gardening Club, various Messiahs, and healers, etc. Desert people’s activism often involves long rides but events are often well attended. Recently a city council meeting drew an over capacity crowd (over 200) on an issue that was talked up on the blog. There was open discussion of the council members and their reputations, times and places to be, names to remember, agendas, etc. Much of the fervor that was whipped up can be credited to the blog.

Last year the state came up with some money and built a skateboard park in Silver City. It is an attractive design, naturally landscaped, big curves with concrete surfaces, very nice shadows. The kids love it, first time they have seen government work for them personally; it built them a place to play. It cost over $700,000, a big deal in this little town. The old park had been a disgrace, rickety wooden ramps, the ramshackle wooden and concrete fence and all other paintable surfaces covered with less than artistic graffiti.

This is a town with almost equally sized Mexican American and Anglo communities. It has a sizeable retiree population. The white kids are about equally divided between straight and hippie origins. Home schooling is quite common, especially among families that live a good distance from town. The Mexican kids are generally from families that work at the copper mine which has been supporting the community for well over 100 years. There is little tension between the communities and much inbreeding over the years. The county has voted Democratic forever and the mine has had a powerful union presence for generations.

Meanwhile, back at the new skateboard park, the local constabulary moves in. As is the custom in places that are dominated by Mexican American traditions, the law operates under wide suspicion. Some of the cops have old family issues and allegiance to traditions that they remain more loyal to than their badges, not to mention their image. The park is too popular and they have to claim it. It is too free.

Couple of cop cars pull up and announce that they are enforcing the “helmet law,” everyone must wear a helmet. Of course helmets are a symbol of sissyhood among the boys. Morning after the announcement, a Saturday, a cop car shows up and busts a kid for not wearing a helmet. He attempts to handcuff the prisoner who resists. The cop tackles the kid (about 13) and attempts to straddle him. Kid’s big brother is watching. He blindsides the cop. Brothers run away. Within minutes there are a dozen cop cars on the scene, lights flashing. One of the brothers is located and arrested for whipping a cop’s ass. The park is closed. Next day kids are arrested for trespassing when they attempt to skate. Kids are very disappointed, can’t use their park. What government giveth, government taketh away. But wait…

Among the skateboarders are sharp kids who attend hippie schools. They do their research and discover that the “law” being enforced is the Child Helmet Safety Act of 2007. This act is designed to persuade and educate bicycle riders and other riders of recreational vehicles to wear helmets. Yes, even though it was designed for bicycle safety, it applies to skateboards as well. What is the sentence for violators under this law? A $10 fine.

Turns out that someone at city hall feared for the potential of a law suit by a party injured at the skateboard park and instructed to police to enforce the helmet law. The police, ignorant of the intent of the law and seeing an opening to establish a presence at the park, simply overreacted. They made up their own law.

There is an annual downtown puppet parade shortly after the attempted arrest. The boys from the skateboard park show up carrying signs — “Save Our Park,” “Police Brutality,” etc. This appearance not only stirs up the cops who raid the parade, cornering and bluffing the protestors, forbidding them the right to march, but inflames much of the crowd which includes activists, it stirs up old resentments against the cops in general.

Who is the old papa-san witnessing much of this through the window of the cafe, a sidewalk away from the action? My goodness, it’s Dr. Mesmo in a rare visit to town on a Saturday and even rarer visit to the restaurant which revived all the reasons why these visits are rare. But history was being made and there I was with a ring side seat. All the cops are fat, some are really fat, in tight shiny black outfits with bright buttons which reveal their waistlines and fat asses, with not quite shaved heads, and utility belts that include a pistol, handcuffs, etc. Ninety percent are Hispanic. At first I thought they were a comedy act, a part of the parade. Then I realized that they were real, disgustingly real.

They were trying to run but could only shuffle forward, what a strange dance, quite entertaining. The most shocking thing about the spectacle to me was how small the boys are, none of them over 18 and many only 13 or 14. I have been proclaiming for some time now that the kids born in the early ‘90’s will change it all when they come of age. The most amazing generation since the kids born in the early 1940’s, they have a Neptune/Uranus conjunction, a very rare and powerful aspect that has not been seen on Earth for hundreds of years. Sure enough, here they are, in Silver City no less, demonstrating for a cause, in the face of the local police. Their face is the skateboarder cult. How appropriate! And they are as non-violent as Martin Luther King in Selma.

The local blog comes alive with indignation over the affair. All the details are revealed, freedom of speech, etc. For all I know the kids have their own blog. Anyway, on the adult blog it looks like MoveOn.com. People are really inflamed. By the time the city council meets the next week the cops are on the spot. Overflow crowd, dozens turned away. Citizens testify and ask hard questions, some of the boys testify (eloquently). The consensus is that cops are a general pain in the ass, bullies with bad attitudes who need to be taken down a few notches, given a crash course in the constitution, and that the park should be opened immediately and the cops should forget the helmet law. It also turns out that the city already has insurance that will cover any lawsuit over injuries at the park. In general the council and chief of police apologize and free the park.

Charges against the brothers and trespassers are dropped. Couple of local attorneys put up $10,000 to pay for educating the kids on helmet safety and provide them with free helmets. The park is livelier than ever, now, no doubt, the place to find kids who are simpatico. Democracy in action. It is on my weekly route so I have watched it develop, albeit at a distance. Now I am proud of it too.

Without the community blog, it is doubtful that the rescue would have happened. It took years for the blog to develop but one man in particular, a devotee of community awareness, stuck with it and made it into a rather impressive forum. No big deal, but well done.

To tell the truth I find the blog to be quite boring most of the time. There are more than a few crazies among the membership, people who live in isolation in the desert and develop some extreme ideas about society and community, some very spiritual with a broad understanding of the natural and others who are seemingly always looking for a fight…not always the brightest lights in the block and easy to inflame.

So I skim it very rapidly as a rule. But I do value it and can see its potential as an organizing forum of progressive thinkers and activists. Communication, Communication, Communication. And I pray that these kids, raised on cell phones and international connections, myspace and ipods, completely at home with computers and skateboards, inheriting a society which is coming apart in an economic crisis, will have the awareness and the courage that will enable them to create a new way, an alternative and constitutional society.

This entry was posted in Rag Bloggers and tagged Police Harassment, Skateboarders, Youth. Bookmark the permalink.

1 Response to Skateboarders, Bloggers and Cops : One Little Victory for the People