Skeletor Is Gonna Be Watching You 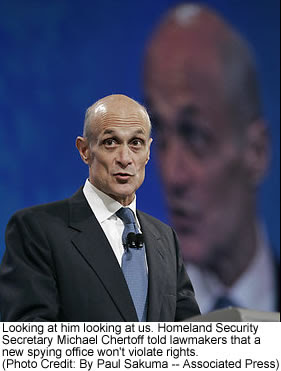 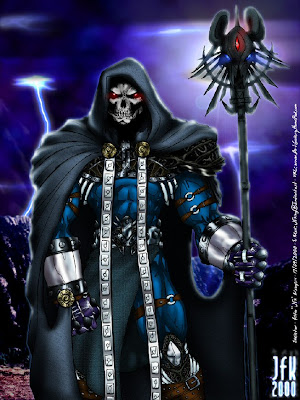 Administration Set to Use New Spy Program in US
by Spencer S. Hsu

The Bush administration said yesterday that it plans to start using the nation’s most advanced spy technology for domestic purposes soon, rebuffing challenges by House Democrats over the idea’s legal authority.

Sophisticated overhead sensor data will be used for law enforcement once privacy and civil rights concerns are resolved, he said. The department has previously said the program will not intercept communications.

“There is no basis to suggest that this process is in any way insufficient to protect the privacy and civil liberties of Americans,” Chertoff wrote to Reps. Bennie G. Thompson (D-Miss.) and Jane Harman (D-Calif.), chairmen of the House Homeland Security Committee and its intelligence subcommittee, respectively, in letters released yesterday.

“I think we’ve fully addressed anybody’s concerns,” Chertoff added in remarks last week to bloggers. “I think the way is now clear to stand it up and go warm on it.”

His statements marked a fresh determination to operate the department’s new National Applications Office as part of its counterterrorism efforts. The administration in May 2007 gave DHS authority to coordinate requests for satellite imagery, radar, electronic-signal information, chemical detection and other monitoring capabilities that have been used for decades within U.S. borders for mapping and disaster response.

But Congress delayed launch of the new office last October. Critics cited its potential to expand the role of military assets in domestic law enforcement, to turn new or as-yet-undeveloped technologies against Americans without adequate public debate, and to divert the existing civilian and scientific focus of some satellite work to security uses.

Democrats say Chertoff has not spelled out what federal laws govern the NAO, whose funding and size are classified. Congress barred Homeland Security from funding the office until its investigators could review the office’s operating procedures and safeguards. The department submitted answers on Thursday, but some lawmakers promptly said the response was inadequate.

“I have had a firsthand experience with the trust-me theory of law from this administration,” said Harman, citing the 2005 disclosure of the National Security Agency’s domestic spying program, which included warrantless eavesdropping on calls and e-mails between people in the United States and overseas. “I won’t make the same mistake. . . . I want to see the legal underpinnings for the whole program.”

Thompson called DHS’s release Thursday of the office’s procedures and a civil liberties impact assessment “a good start.” But, he said, “We still don’t know whether the NAO will pass constitutional muster since no legal framework has been provided.”

DHS officials said the demands are unwarranted. “The legal framework that governs the National Applications Office . . . is reflected in the Constitution, the U.S. Code and all other U.S. laws,” said DHS spokeswoman Laura Keehner. She said its operations will be subject to “robust,” structured legal scrutiny by multiple agencies.