Some Fundamental Changes in Decision-Making in Germany and the USA 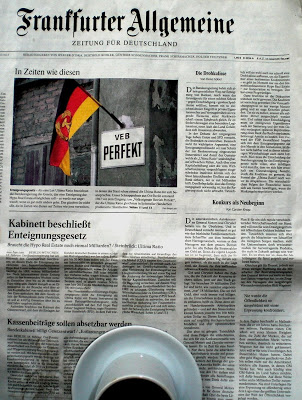 THIS IS SATIRE on the front page of “Frankfurter Allgemeine Zeitung.” Photo by David MacBryde.
Some fundamental changes in decision-making in Germany and the USA — pointed at by the Rag Blog Berlin correspondent
By David MacBryde / The Rag Blog / March 11, 2009

News in Berlin: Germans debate and draft legislation to enable bank expropriation if necessary for the public good.

(A) Acting now in the capital market crisis, the decision about this specific legislation marks a seismic change in Germany about economic decision-making. For a comparison to the USA, Joseph Stiglitz’s article “Capitalist Fools” is helpful.

BERLIN – Something new and something old: The conservative “Frankfurter Allgemeine Zeitung” (FAZ) on 19 February 2009 headlines the cabinet decision on legislation that would enable bank expropriation if that becomes necessary for the common good. The editorial expresses concern, but acknowledges the decision.

The front page picture by Helga Lade, in an attempt at humor in these times, is titled “In Times Like These” and shows a 1987 photo of the communist East German flag flying at the “Peoples’ Own Enterprise” ( “Volkseigenebetrieb”, VEB) PERFEKT – a factory, rather dilapidated, making crash helmets. THIS IS SATIRE.

What is at stake here? Who is being satirized? What changes are happening?

First, something old, and what is NOT happening: While the FAZ jokes with a flash-back to monopoly state socialism, that is not what is happening and is not the issue. Indeed the conservative FAZ satires and explicitly chastises the few residual neo-liberal extreme market fundamentalists who try to attack the current democratic government decision about expropriation by trying to paint it as some kind of a march back to monopoly socialism. The conservative FAZ editors, and most people in Germany, view such attacks by residual market fundamentalists as untenable and not helpful in the current work for solutions.

What is now happening is a lot: — A nation-wide warning strike by 700,000 public employees. Brief, Successful. — The passage of a second anti-depression stimulus package, after extensive and intense debates. – Local school districts deciding about their stimulus efforts. — The decision to change motor vehicle tax to include exhaust emissions. — Emergency European meetings acting on the capital market crisis, and working towards the international economic summit decisions scheduled for April. — Considerable anger at General Motors management, with concern about what to do with the GM subsidiary in Germany , Opel. — And more, such as the exciting Berlin Film Festival. The specially featured opening film, out of competition, was appropriately “The International”, a finance system crime thriller. The Golden Bear best film prize (the Berlin mascot is a bear) was awarded to a film from Peru — about a mother’s trauma — raped by paramilitary mercenaries — affecting her daughter.

What I want to focus on is one particular change in decision-making processes here. The decision was made to draft legislation specifying and enabling the decision-making process involved in bank expropriation. The particular acute problem now only involves one bank, the Hypo Real Estate Bank. Germany already has publicly owned banks in the “mixed” economy here. The issue is not having publicly owned banks. (And it should be noted that there have been some cases of disastrous mismanagement in “publicly owned” banks here, and convictions.) The issue now at hand is what happens when there is a conflict between a privately owned bank, private capital, and the public interest as represented by an elected government. Can, and with what due processes under law, a government force a takeover, expropriate, a private bank? (WARNING: it may be a disastrous mistake to actually proceed and take over a “bad bank”, depending on what is in the bank.) The issue here now is not whether to actually take over this one bank, or others, without knowing what possible disasters might be hidden in the bank. The issue is about having a legitimate process for forced expropriation, if and when that needed in the public interest. Significantly, now even the conservatives use the “e” word – expropriation. The current government here is a coalition of the two largest political parties. The news is that the conservative party, CDU, did not block, as in the past, but finally agreed with the progressive party (SPD) on creating this new decision-making process.

It marks a recognition and acceptance, even by conservatives here, that the capital market crisis is indeed a crisis of market failure, investment decision failure, and that democratically legitimate action on and intervention in “the market” including expropriation of private capital, can be needed and justified in the public interest.

For comparison to the USA, Joseph Stiglitz’s article “Capitalist Fools” is helpful:

“A Dangerous Moment ahead of us”:

Behind the debate over remaking US financial policy will be a debate over who’s to blame. It’s crucial to get the history right, writes a Nobel-laureate economist, identifying … key mistakes … and one national delusion.

There will come a moment when the most urgent threats posed by the credit crisis have eased and the larger task before us will be to chart a direction for the economic steps ahead. This will be a dangerous moment. Behind the debates over future policy is a debate over history – a debate over the causes of our current situation. The battle for the past will determine the battle for the present. So it’s crucial to get the history straight.” As Stiglitz concludes about the causes of the crisis we are now in: “The truth is most of the individual mistakes boil down to just one: a belief that markets are self-adjusting and that the role of government should be minimal.” (ob cit. “Capitalist Fools”)

So let us briefly review some of the history we have just been living through:

Within the economy: The capital market and investment decision processes broke down. (As one measure: the Asian Development Bank estimates as of 9 March 2009 that some 50 Trillion US$ have been destroyed so far in the crisis, the equivalent of one year of total global gross domestic product.)

Within the US government: some sudden massive seismic shifts occurred, with three events in mid-September 2008 that I wish to remind us of:

That would have established what can accurately be called executive branch economic tyranny, adding to the other extensive (and sometimes secret) executive branch powers claimed by the Bush-Cheney administration. Let us call it “Paulson´s Panicky Punt”, or the “Paulsonite Republican Bailout”.

3 – But the crises in the economy was continuing, and there was a basic choice:

3A – Do nothing. Many of the Republicans in Congress, in contrast to the Paulsonites in the administration, adopted the opposite position, call it the “Hooverite Ploy”, to let the crisis happen basically without government action and relying on their extreme market fundamentalism.

3B – Act by trying, although the Bush-Cheney administration still held executive power, to change away from a “bailout for the banks” towards an “investment by and for the people” — to move in the direction of developing oversight and accountability and ways to enable democratic government activity. As one first step, the Congressional Oversight Committee was created, with Elizabeth Warren as chair, to start public hearings.

The basic point is that the breakdown of the capital market and of investment decision-making, and the September 2008 events, certainly raised issues about decision-making.

But the changes in decision-making in the USA have only started — and, as Stiglitz warns, the outcomes are not clear.

At least there was one bright day in Germany recently as some decisions were made. But what is the forecast — the weather forecast and the economic forecast? 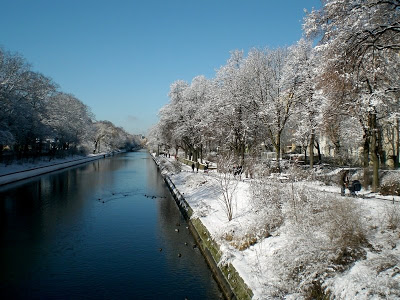 On one bright day some substantial decisions have been made in Berlin. Will there be more bright days? Weather forecasts are difficult. Photo: David MacBryde.

I am trying to grow my understanding of what is happening, and will try to write more also in this blog on some philosophical and economic questions.
Here I will formulate one question. (Remember you first saw the question formulated this way here.)

U – an historically traditional “cyclic” downturn followed by an upturn – one question being how long the bottom of the U is. (One thing is clear: the kind of “growth” on into the future will not be the kind of growth that aims at getting four cars in every garage on the planet.)

I – a rapid decline to social disintegration, and irreversible.

Or can we get to an E with different kinds of economic activities and growth.

– To achieve sustainable energy and physical resources use.
(For instance not depleting but sustaining and improving soil, “permaculture”, and maximizing full cycle recycling of various minerals.)

– To develop positive growth, possibly rapid, and unlimited over time.
(For instance how much music, how many songs, can there be? What other activities, over time, have no limits?)

So to get “beyond” the crises, what kinds of activities need to be reduced, what kinds need good stewardship to be sustainable, what kinds can be grown?

Doing that will involve lots and lots of decisions. So one bright spot while we get, pun intended, a crash course in the economy is the opportunity to open up, enrich, decision-making about and within the economy.

A few changes in decision-making processes are already happening.