Someone Will Have to Be Held Accountable

Financial Collapse will End the Occupation: And it won’t be “A time of our choosing”
By Mike Whitney / April 14, 2008

“Come and see our overflowing morgues and find our little ones for us…
You may find them in this corner or the other, a little hand poking out, pointing out at you…
Come and search for them in the rubble of your “surgical” air raids, you may find a little leg or a little head…pleading for your attention.
Come and see them amassed in the garbage dumps, scavenging morsels of food…
Come and see, come…” Flying Kites Layla Anwar 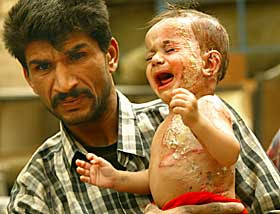 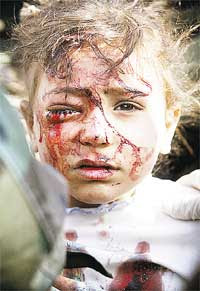 The US Military has won every battle it has fought in Iraq, but it has lost the war. Wars are won politically, not militarily. Bush doesn’t understand this. He still clings to the belief that a political settlement can be imposed through force. But he is mistaken. The use of overwhelming force has only spread the violence and added to the political instability. Now Iraq is ungovernable. Was that the objective? Miles of concrete blast-walls snake through Baghdad to separate the warring parties; the country is fragmented into a hundred smaller pieces each ruled by local militia commanders. These are the signs of failure not success. That’s why the American people no longer support the occupation. They’re just being practical; they know Bush’s plan won’t work. As Nir Rosen says, “Iraq has become Somalia”.

The administration still supports Iraqi President Nouri al Maliki, but al-Maliki is a meaningless figurehead who will have no effect on the country’s future. He has no popular base of support and controls nothing beyond the walls of the Green Zone. The al-Maliki government is merely an Arab facade designed to convince the American people that political progress is being made, but there is no progress. Its a sham. The future is in the hands of the men with guns; they’re the ones who have divided Iraq into locally-controlled fiefdoms and they are the one’s who will ultimately decide who will rule the state. At present, the fighting between the factions is being described as “sectarian warfare”, but the term is intentionally misleading. The fighting is political in nature; the various militias are competing with each other to see who will fill the vacuum left by the removal of Saddam. It’s a power struggle. The media likes to portray the conflict as a clash between half-crazed Arabs–“dead-enders and terrorists”—who relish the idea killing their countrymen, but that’s just a way of demonizing the enemy. In truth, the violence is entirely rational; it is the inevitable reaction to the dissolution of the state and the occupation by foreign troops. Many military experts predicted that there would be outbreaks of fighting after the initial invasion, but their warnings were shrugged off by clueless politicians and the cheerleading media. Now the violence has flared up again in Basra and Baghdad, and there is no end in sight. Only one thing seems certain, Iraq’s future will not be decided at the ballot box. Bush has made sure of that.

How Will It End?

The Bush administration has decided to pursue a strategy that is unprecedented in US history. It has decided to continue to prosecute a war that has already been lost morally, strategically, and militarily. But fighting a losing war has its costs. America is much weaker now than it was when Bush first took office in 2000; politically, economically and militarily. US power and prestige around the world will continue to deteriorate until the troops are withdrawn from Iraq. But that’s unlikely to happen until all other options have been exhausted. Deteriorating economic conditions in the financial markets are putting enormous downward pressure on the dollar. The corporate bond and equities markets are in disarray; the banking system is collapsing, consumer spending is down, tax revenues are falling, and the country is headed into a painful and protracted recession. The US will leave Iraq sooner than many pundits believe, but it will not be at a time of our choosing. Rather, the conflict will end when the United States no longer has the capacity to wage war. That time is not far off.

The Iraq War signals the end of US interventionism for at least a generation; maybe longer. The ideological foundation for the war (preemption/regime change) has been exposed as a baseless justification for unprovoked aggression. Someone will have to be held accountable. There will have to be international tribunals to determine who is responsible in the deaths of over one million Iraqis.

Read all of it here. Information Clearing House / The Rag Blog

This entry was posted in RagBlog and tagged Economy, Iraq, Middle East. Bookmark the permalink.