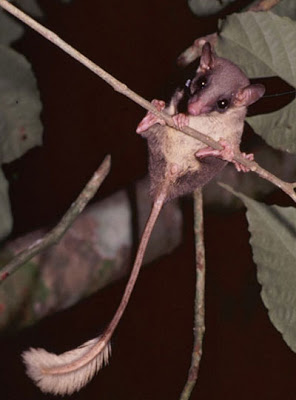 Heavy Drinker: A pen-tailed treeshrew is shown wearing a radio collar. The clawed, big-eyed treeshrews were observed slurping up a beer-like brew from flowers of the bertam palm in the West Malaysian rainforest. The natural brew contains up to 3.8 percent alcohol, which is very close to the alcohol content of most human-manufactured beers. Photo by Annette Zitzmann.

Even the most ardent beer fans would have trouble subsisting on their favorite brew day in and out, but scientists have just discovered that the pentailed treeshrew lives off a frothy, fermented nectar that smells like beer and has its same alcohol content.

Humans previously were thought to be the only animals that regularly imbibed alcohol, but the soft-furred, slender treeshrews drink far more than most humans ever could for their body weight, and have been doing so for up to 55 million years.

But are the treeshrews forever tipsy?

“They show no obvious signs of drunkenness when observed from only 9.8 feet away away,” lead author Frank Wiens told Discovery News. “However we do not rule out psychopharmacological effects induced by alcohol.”

“On the contrary, I believe that some psychological effects induced by alcohol, such as effects on the brain, mood and learning, are crucial in this system,” added Wiens, a researcher in the Department of Animal Physiology at the University of Bayreuth in Germany.

Wiens and his team made the discovery, outlined in the latest Proceedings of the National Academy of Sciences, after first detecting a “strong alcoholic smell reminiscent of a brewery” from flowers of the bertam palm in the West Malaysian rainforest Segari Melintang Forest Reserve in the State of Parak. Nectar from this plant frequently frothed up and out of the palm’s long, tubular flowers.

The researchers conducted video surveillance of visitors to the plant and determined that many species bellied up to the bar-like scene, particularly at night, when the number of visits more than doubled. Nocturnal imbibers included the gray tree rat, the Malayan wood rat, the chestnut rat, the slow loris and the pentailed treeshrew.

The latter two animals spent far more time than the others did moving up and down the palm flowers and licking off the available nectar and pollen. The shrews stayed an average of 138 minutes per night, while the lorises fed for an average of 86 minutes each night.

The natural brew contains up to 3.8 percent alcohol, which is very close to the alcohol content of most human-manufactured beers. Given variations in alcohol content and amounts consumed, Wiens and his team say the clawed, big-eyed treeshrews would have a 36 percent chance of being drunk, by human standards, on any given night.

Wiens said there are even “reports of Malaysian indigenous people harvesting the nectar in former times,” with these people getting “a buzz from the nectar.”

While he suggested the treeshrews might also experience some kind of pleasant sensation, they appear to handle their alcoholic diet well. Analysis of hair plucked from the creatures revealed extremely high concentrations of a compound known as ethyl glucuronide. This is the end product of a chemical process that gets rid of alcohol and other toxic things from the body.

“In humans, only a negligible amount of the consumed alcohol is detoxified via this pathway,” Wiens said.

The process explains why a small amount of alcohol can help reduce anxiety and stress in people, while conferring certain other medical properties, but larger amounts can often lead to health problems and alcohol addiction.

Since the pentailed treeshrew is believed to be ecologically and behaviorally close to extinct, ancestral primates that lived over 55 million years ago, the researchers theorize early shrews and primates were exposed to potentially harmful alcohol levels early in their development, but that humans and most other modern primates either weren’t exposed to it as much, or lost the beer-guzzling adaptations as the years went on.

Webb Miller, a Penn State University professor of biology, computer science and engineering, has also studied treeshrews, along with flying lemurs. Miller and his team found that, despite their diminutive size and physical differences, the rainforest dwellers are closely related to us.

Miller said “now that we know their relationship to primates,” treeshrews and flying lemurs, in particular, “are going to be much more important species to study.”

In the future, Wiens and his team hope additional studies on pentailed treeshrews and their favorite food might help to explain how alcohol consumption emerged in humans and why certain groups possess different levels of tolerance. Asian individuals, for example, possess a low metabolic tolerance for alcohol that protects against alcoholism. Wiens said evolved adaptations to toxins found in rice could have resulted in that ability.

This entry was posted in RagBlog and tagged Fauna, Nature. Bookmark the permalink.