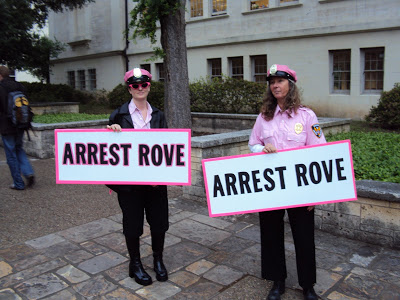 Heidi Turpin (left) and Fran Hanlon, members of CodePink’s “Pink Police,” express their intentions, April 19, 2010, on the campus of the University of Texas at Austin, prior to an appearance by Republican strategist Karl Rove. Photo by Jim Turpin / The Rag Blog.

Both applause and jeering remarks frequently interrupted leading Republican political strategist Karl Rove during his speech at an event hosted by College Republicans at the Texas Union Ballroom on Monday night. …

Protestors from women’s peace organization Code Pink; grassroots justice group We Are Change; and UT Chicano civil rights group MEChA lined the back of the room with signs accusing Rove of war crimes, and many individuals in the audience yelled comments and insults at Rove throughout the course of the evening. …

A total of nine protestors were removed from the ballroom. Two were arrested, and seven were cited for criminal trespassing, UTPD spokeswoman Rhonda Weldon said. …

Rove did not ignore the protestors, referring to them as “malcontents” and telling several to “shut up and sit down.”

[According to The Raw Story, one of those arrested for shouting at Rove was Aaron Dykes, an associate of libertarian radio talker and conspiracy theorist Alex Jones. (Also see Infowars.)]

Returning to the University of Texas two years ago to finish up my old government degree — so I could then study sustainable design in UT’s School of Architecture — has been a a real gift. I now get an admittedly outsider’s glimpse into the world as seen by a privileged segment of our younger citizens. I am exposed to the latest technologies, the newest and hippest musical styles, the widespread angst and apathy I see as a national epidemic — and last week, I got to see Karl Rove. 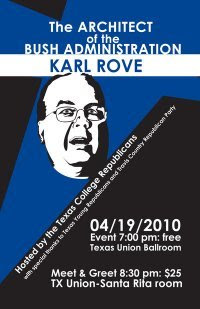 The previous week a brightly-colored flyer with Karl’s face had caught my eye. Copies of it were posted on the bulletin boards that line the halls of the University. There he was amid the offers to study in Mexico, find a Spanish tutor, and join the Islamic students for a talk about the misconceptions swirling around what it means to be a Muslim. There was his big, fat, round visage with that iconic smirk.

The “architect of the Bush administration” was to speak on campus the next Monday, April 19. “Hosted by the Texas College Republicans,” the flyer said, although I was to find out the hard way that they were only the titular hosts of this Republican Big Deal — after I fired off a Letter to the Editor in the Daily Texan‘s Firing Line the next day. My letter questioned whether — in this climate of educational budget cuts and employee layoffs at the University — forking over the bucks to pay for enough security to keep CodePink’s Pink Police’s handcuffs off of this man might not be the best possible way to put my hefty tuition to use.

The response to my letter was swift and vociferous. Not only was I an ill-informed dimwit who hadn’t the intellectual skills to research and find out that the on-campus Young Republicans were (in theory) footing the bill for everything, but I was a disgrace to government majors everywhere due to my obvious connection to unpatriotic terrorists — and I was a “freak/fringe” lefty to boot.

I was a pretty sorry excuse for a student and might not even be worthy of calling myself an American anymore. One writer suggested I be burned in effigy, another, using the name “Ann Coulter,” advised that I should move to Canada where I would be happier. Thank you, Ann.

The College Republicans and their supporters had a field day with me, taking obvious glee in hurling insults in my general direction and painting me with every available slur reserved for their favorite target: liberals.

Came the day of the actual appearance of Karl Rove and — in addition to figuring out what to wear, whether to have a beer first at the Cactus Cafe, and where to find the mobility-impaired entrance to the event — I had to decide if I wanted to get arrested. Or not. I decided that my impending graduation from UT, 40 long years in the making, was not going to be spoiled by Karl Rove, so it was a “not.” 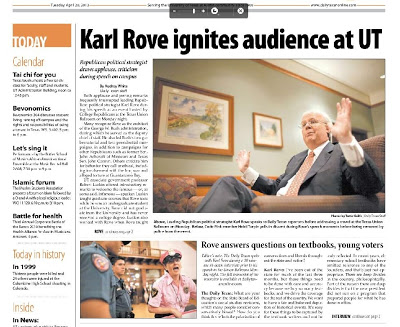 Image from page one of the UT-Austin student newspaper, The Daily Texan, April 20, 2010.
The room was filled with Old Republicans whose generous donations, as I was to find out, were the real source of funding for Rove’s appearance. The first several rows of the Union Ballroom were occupied before the hoi polloi were even allowed in the room; these were the same folks who would later gather for a Meet and Greet with the Great Liar himself at a catered reception down the hall. The silver-hairs were a dead giveaway that this was only nominally a speech for students. This was a Republican pep rally.

As Karl Rove lied his way through an incredibly detailed account of why Obama’s health care bill was the world’s biggest failure and an affront to physicians and patients (and taxpayers) everywhere, I realized that this was a very boring man. He was a symbol of what the Bush Administration had brought to us and what smart, motivated people can accomplish when they put their minds to it. We can have wars-without-end, tax breaks for the wealthy, corporatized everything, and act snooty — all at the same time.

Some lackey from the UT administration got up at the first outburst from a protester in the audience and announced that each ne’er-do-well would be given “three warnings” to pipe down and then would be escorted from the room, perhaps to be arrested. I thought at the time, “how generous, how civilized of them,” but this policy was abandoned after the first unsanctioned speaker was led from the hall and after that one merely had to say something out loud and the UTPD came and got you. 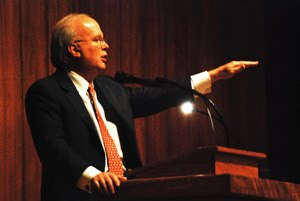 Nice pose, Karl. Rove speaks in Austin to pep rally peppered with malcontents. Photo by Corey Leamon / The Rag Blog.
One by one, as Rove droned on, NINE people were taken from the room for merely speaking out loud. However, if you said something that Rove liked, you got to stay. I did notice that.

Rove had a lie to answer every accusation that came up during the Q&A period following his mind-numbingly dull speech. My favorite: We invaded Iraq to prevent an arms race between Iran and Iraq. News to me.

When questioned about WMD or his involvement with outing CIA operative Valerie Plame, he immediately countered with how many other people were also wrong — or did the same thing he did. Hide among the guilty and it is hard to pick out just one person to blame the crime on. He was not blameless, he was just not the only one. Bush didn’t lie about WMD in Iraq — because Kennedy, Pelosi, and Kerry did, too. He didn’t out Plame — because Armitage and Novak did, too.

When I left the hall after the event was finally over, I had the option, as it turned out, to sneak into the Meet and Greet since the mobility-impaired exit/entrance was the same door where they were collecting tickets to the catered event in the Santa Rita Room down the hall. When asked for my ticket by the cop, I simply informed him that this was my proper exit route and he let me through ticketless.

As I waited for my elevator to flee the massed Republican horde in the Rove reception line, I had to once again ponder whether I should risk arrest or at least embarrassment by posing as one of the faithful. (I looked a lot like them; I had not worn my Che t-shirt that night, opting instead for a nice jacket and clean black slacks and shirt.)

But once again I decided not to get in trouble. Not tonight. Not for Karl Rove.